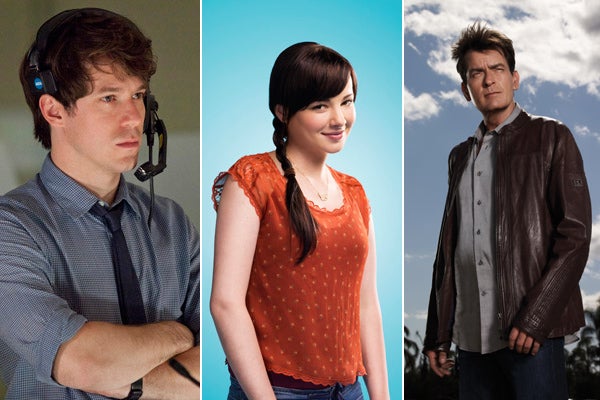 Hump: I’m going to be totally honest with you: I’ve had this paragraph pre-written in my head for years. If you know me, you know that my love for John Gallagher Jr. knows no bounds. I’m obsessed with rock musicals, and this guy’s been in some of the best portrayals of teen angst set to well-orchestrated rock music to ever hit the Broadway stage. We're talking about Spring Awakening, for which he won a Tony award at the age of 22 (!) and American Idiot.** He also played the original Ryan Gosling (well, Ryan Gosling’s character) in the stage version of The Ides of March, which was called Farragut North.
Advertisement
What I’m trying to say is, I’ve been waiting for the chance to share the magic that is JGJ with the world for years. He’s hilarious (you can read his musings about life and follow his undying commitment to The Avett Brothers on Twitter), is friends with both Green Day’s Billie Joe Armstrong and Lea Michele (yet probably wouldn’t name-drop either of them in a conversation), and has sported the same black Dravens he wore as troubled teen Moritz to every red-carpet event since his Spring Awakening days. That’s right, the guy wears black Chucks to A-list events. Swoon.
Naturally, this category was kind of a lock for dear John. I can’t say I enjoyed The Newsroom, what with having to watch the characters “break” two-year-old news stories like the BP oil spill, this time with a Sorkinian sway. I did, however, like John’s character, Jim Harper. Although I’m not entirely sure why they named him something that sounds so much like Jim Halpert when, much like The Office’s likeable everyman, he’s going to be the underdog in a major love triangle this season. Nevertheless, I love a good professionally successful yet socially awkward guy. Jim/John, stop pining for the girl with the boyfriend and say hello to the girl not taken (read: me).
**This is also a great opportunity to share that I used to take to a gym class with the actress who played his love interest in American Idiot, and it took every fiber of my being not to walk up to her and tell her how lucky she is that she got to hump JGJ onstage every night. Because that’s not creepy at all!
Advertisement
Marry: If you didn’t watch season one of Awkward on MTV, please do yourself a favor and catch up now on MTV.com so you can dive right into season two, which premiered on Thursday. Awkward is the most well-written, refreshing, honest, and clever high-school sitcom in ages. The show centers on Jenna Hamilton (Ashley Rickards), who’s not a member of the popular crowd, but she’s also not one of the proverbial freaks and geeks or outsiders, either.
Jenna feels invisible, and season one details her struggle to craft a public identity for herself that matches up with the pretty kick-ass one she’s already developed in private. Unfortunately, this takes the form of an accidental suicide following the loss of her virginity to the hottest guy in her grade, so it’s clearly never going to be smooth sailing for Jenna Hamilton.
She may feel awkward, but she’s still secure enough in her own skin to go after what she wants, which just so happens to be two of the most desirable guys in her class. It’s obvious that she’ll grow up to be totally awesome, and she’s already self-aware enough to realize that high school is temporary. That’s no easy feat for a 16-year-old when the school’s resident Regina George texts everyone topless photos of her and does everything else within her power to “ruin” Jenna (ah, high school...what does that threat even mean?).
Jenna Hamilton is, on many levels, wish fulfillment for twentysomethings like me who didn’t feel like high school was the best time of our lives. Whereas I didn’t do much about it, Jenna has two dudes fighting for her affection, and she doesn’t let a little thing like an accident that’s mistaken for a suicide attempt get her labeled for life. Forget stigma, Jenna Hamilton is scripted television’s best 16-year-old success story in years.
Advertisement
Kill: Remember when Charlie Sheen went batshit crazy (well, more so than usual) in like, February/March 2011? And it was funny for like a hot second, but then we all realized we were watching an overpaid buffoon in the throes of addiction that caused him to get fired from his cushy job and most of his teeth to decay? More like #losing, amiright?
Anyway, FX doesn’t seem to recall how that whole sad turn of events went down because they decided to debut a new sitcom starring none other than Charlie Sheen on Thursday night. On Anger Management, Sheen plays yet another thinly veiled version of himself (read: a character whose first name is Charlie, and — though he has a different last name and career — he still has the same mental issues and personality). This time around, he’s a former baseball catcher who was thrown out of the league due to...wait for it...rage issues. Now, he’s a therapist who holds anger-management therapy group sessions, where he says things like, “Anger took away that something I really love, and I’m here to try to keep that from happening to you.”
It’s all well and good to make statements like that, but Sheen is still hiding behind the veil of a character — no matter how thin or transparent. If Charlie Sheen really wanted to change for the better, he’d step out of the public eye completely to focus on whatever issues are brewing in the character called “Charlie Sheen” he’s been playing for all these years. Besides, does he really want to be remembered as a decrepit, aging, crass man instead of the silly, sexy soldier in Hot Shots?

Photo: Via HBO; Via MTV/Matthias Clamer; Via Frank Ockenfels / FX