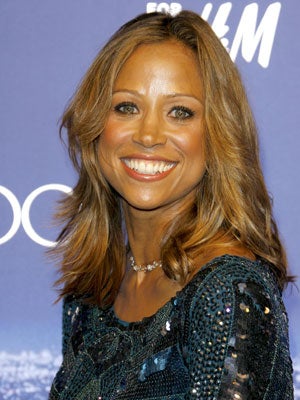 Okay, so we weren’t exactly shocked when we heard George Clooney and Ellen DeGeneres each donated several thousand dollars to President Obama's campaign funds. And while Clint Eastwood’s chair speech was a little, um, something, we weren’t surprised he is stumping for a Republican. However, there are a few celebrities we didn’t quite expect to back certain candidates — or any candidates at all, for that matter.
Stacey Dash (Mitt Romney) — You’ve probably heard by now that Stacey Dash — you know her as Dionne from Clueless — tweeted her support for Mitt Romney this week. She called him “the only choice for your future,” then immediately faced a ridiculous barrage of negative comments for it, many focusing on her race and gender. She told CNN's Piers Morgan she was "saddened and shocked" and didn't understand the fury. "It is my right as an American citizen" to choose who to vote for, Dash said. "I chose him not by the color of his skin, but by the content of his character." Snaps to her for standing up for her beliefs, but we can't say we weren't caught, like, way off guard by the whole situation.
Advertisement
Jenna Jameson (Mitt Romney)  — A porn star supporting a candidate who opposes access to abortion and would end federal aid that makes it possible for millions of women to get birth control? Seems a little off. Even more so is the fact that she announced her support at a strip club. But it seems Jameson is putting her mouth where her money is. Her reason for backing Romney? “When you’re rich, you want a Republican in office.”
Eva Longoria (Barack Obama)  — It may not come as a shock that Eva Longoria has endorsed President Obama, but her level of support is a different story. Longoria is one of the co-chairs of the president’s reelection campaign. She’s donated more than $75,800 on his behalf, served as the MC of a swanky fundraiser this month in Miami, and spoke at the Democratic National Convention. That’s dedication!
Scott Baio (Mitt Romney) — This one surprised us mainly because, well, other than his stint as Bob Loblaw on Arrested Development, has anyone even thought about Scott Baio since the late 1980s? But, apparently, Charles was putting away some serious bank while he was in charge: He’s donated $20,000 to Romney and the Republican National Committee in the past year, according to the Federal Election Commission, and he attended a thousands-a-plate Romney fundraiser in L.A. in June.
Nicki Minaj (Barack Obama) — Before this whole Mariah Carey feud, Nicki Minaj was raising eyebrows in the political realm with a line she sang in “Mercy,” a track on Lil’ Wayne’s album: “I’m a Republican voting for Mitt Romney.” Turns out the rainbow-haired rapper was just messing around. President Obama told a radio host he thought Minaj was just playing a character, and she confirmed it with a tweet: “Ha! Thank you for understanding my creative humor & sarcasm Mr. President, the smart ones always do… *sends love & support* @BarackObama."
Advertisement
Brad Pitt’s mom, Jane (Mitt Romney) — Okay, maybe this isn’t as surprising as it would be if Brad and Angelina came out in support of Mitt Romney, but Jane Pitt’s letter to the editor of a Missouri newspaper raised a lot of eyebrows when it was published in July. “I hope all Christians give their vote prayerful consideration because voting is a sacred privilege and a serious responsibility,” she wrote. Angelina’s dad, Jon Voight, supported her and has also publicly endorsed Romney.
Jason Alexander (Barack Obama) — Jason Alexander – a.k.a. George from Seinfeld — declared his “man crush” on President Obama last month and is campaigning at universities in Florida this week. It doesn’t seem quite like the right demographic, though we’re guessing Beyoncé wasn’t available. Still, the most surprising thing about all of this? The new hair he’s sporting. We’ll give him that it looks a lot better than George’s toupee (the one Elaine threw out the window), but he’s definitely not fooling anyone.

Entertainment News
California Sues Studios For Sexual Harassment On The Set Of Cr...
In a nearly unprecedented move, California’s Department of Fair Employment and Housing filed a lawsuit against the various studios behind CBS’ Crim
by Britni de la Cretaz
Entertainment News
Matt Lauer Responds To Rape Claim & Calls Out Ronan Farrow’...
Matt Lauer has reared his head for the first time since his 2017 #MeToo reckoning to speak out against Ronan Farrow and a claim made in his book Catch and
by Kathryn Lindsay
Entertainment News
Mary-Kate Olsen Reportedly Desperate To Finalize Divorce
After five years of marriage, Mary Kate Olsen is reportedly divorcing husband Pierre Olivier Sarkozy, according to TMZ. Fashion mogul Olsen and Sarkozy, a
by Kaitlin Reilly
Entertainment
Little Richard, The First Rock Star, Is Dead At 87
Little Richard, a pioneer and icon of rock ‘n’ roll, died Saturday at the age of 87. His son, Danny Jones Penniman, said his father succumbed to bo
by Araceli Cruz
Entertainment News
Roy Horn Of Siegfried & Roy Is Dead One Week After Coronavirus Di...
On Friday, entertainer Roy Horn died of COVID-19 at the age of 75. Horn, known for being half of the German duo Siegfried & Roy, passed away in Las Veg
by Araceli Cruz
Pop Culture
The Feds Are Off The Hook In The College Scam Case, But Lori Loug...
Lori Loughlin and her husband, Mossimo Giannulli, were handed a major setback in the ongoing college scam case. A federal judge refused to dismiss the char
by Tanya Edwards
Entertainment News
Britney Spears: Her Conservatorship, Health Crisis & The Conspira...
In the spotlight for two decades, Britney Spears is a pop icon for a generation. She has also become a cottage industry, selling more than 33 million album
by Courtney E. Smith
Entertainment News
Drew Barrymore Is The Cool Mom Who Lets Her Kids Have A Lizard, G...
Like any child reared on ‘90s Disney movies, I thought having a woodland creature as a best friend was something I could expect. My childhood home has a
by Lauren Le Vine
Entertainment News
Scott Disick’s Lawyer Shares Details Of His Rehab Stay
After reports claimed Scott Disick was in rehab for substance abuse issues, Disick’s lawyer Marty Singer set the record straight to TMZ. Disick is re
by Kaitlin Reilly
Entertainment News
Kristen Cavallari & Jay Cutler Reach Custody Agreement In Midst O...
Shortly after announcing their plans to divorce, Kristin Cavallari and Jay Cutler have reached a custody agreement, according to People.  Cavallari an
by Kaitlin Reilly
Pop Culture
Lea Michele Confirmed Those Pregnancy Rumors With Two Words
After rumors emerged earlier this week that Lea Michele is pregnant, the actress confirmed that she and her husband, Zandy Reich, are expecting their first
by Sarah Midkiff
Pop Culture
Kristin Cavallari & Jay Cutler Announce They’re Getting Div...
After seven years of marriage and a total of 10 years together, Kristin Cavallari and Jay Cutler announced “with great sadness” that they are getting d
by Alexis Reliford
Discover
R29 Stories & News
Watch
R29 Original Series & Films
Shop
R29's Most Wanted