Skip navigation!
Story from New York
As youngsters, we're taught a simple creed — that before judging others, we should "put ourselves in their shoes." Vice's fashion editor, Annette Lamothe-Ramos, had a different idea when she took the childhood adage for a spin by donning a burqa for a full day of New York City tourist-ing, with trips to Brooklyn, Central Park, and the Empire State Building. Initially, Ramos was asked to find a burqa for a photo shoot and was surprised by the difficulty of tracking one down online, as well as the lack of search results for articles that explained the social experience of wearing a burqa in a non-Muslim culture.
Advertisement
With an anthropological curiosity, she was most interested in people's reactions to the traditional Muslim garb. Says Lamothe-Ramos, "Eight out of 10 people that I came in contact with while wearing a burqa acted as if I didn’t even exist, which actually made me feel worse than the looks I received from busybodies who were offended by my presence." She felt particularly uncomfortable at the top of the Empire State Building, feeling the scrutinizing stares of security guards and tourists. Ouch.
Burqas are usually misperceived as indicating a woman's level of religious devotion, but the garment is a piece of Muslim culture, and not wholly tied to Islamic faith. Many women today wear the garment out of personal choice. As first and foremost fashion fans, we take pride in being part of an industry that encourages self-expression, whether it's a dress made entirely out of meat, nails that resemble talons, or a garment that covers it all up — as long as it's a personal choice (and not a social obligation).
You tell us, is there any other garment still worn today that inspires more controversy? (Vice) 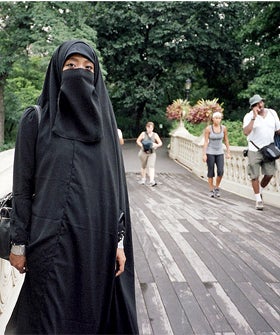 Style
Sweet, Cute & Pretty: Yes, We’re Talking About Balaclavas
Last year, a surprising accessory trend caught on with the maximalist fashion crowd, turning standard tops and dresses into statements with one simple addi
by Eliza Huber
Style
These Are The Best Dressed Celebrities At The (Virtual) Golden Gl...
by Eliza Huber
Golden Globe Awards
Sarah Paulson Wore A Custom Prada Cast To The Golden Globes
And the award for best 2021 Golden Globes red carpet accessory goes to Sarah Paulson… and her runway-ready Prada cast! Ahead of the show, the ac
by Sarah Midkiff
Fashion
Cynthia Erivo’s Golden Globes Look Came Straight Off The Ru...
Just because the 2021 Golden Globes were virtual this year, doesn’t mean that there wasn’t a number of fashion-forward looks thanks to the celebrit
by Sarah Midkiff
Style
We Did The Research & These Are The Best Golden Globe Looks Of Al...
by Eliza Huber
Fashion
January Jones & Kiernan Shipka Rewore Their Golden Globes Looks F...
January Jones and Kiernan Shipka have already won the 2021 Golden Globes best-dressed award. The two former Mad Men co-stars re-wore their dresses from whe
by Sarah Midkiff
Style
These Fashion Month Trends Are The Perfect Mix Of Comfort & High ...
by Eliza Huber
Best Bras
Affordably Stock Your Underwear Drawer With These 8 Brands
by Emily Ruane
Deals
Sustainable Styles Are Up To 40% Off At Pact This Weekend
by Alexandra Polk
Fashion
How “Genderless” Collections Might Be Missing The Point
Earlier this month, the much-loved sustainable activewear brand Girlfriend Collective launched its “For Everyone” collection: a range of outerwear and
by Amanda Randone
Style
The Moment That Gave Us Raf Simons, Fashion Designer
For two decades now, Raf Simons has consistently been one of the buzziest designers in fashion. Despite being part of the establishment — he’s one-half
by Eliza Huber
Style
The United States vs. Billie Holiday Features Fashion From...
When singer-actress Andra Day steps on stage to perform Billie Holiday’s “Them There Eyes” in Lee Daniels’ new film, The United States vs. Billie H
by Eliza Huber
Discover
R29 Stories & News
Watch
R29 Original Series & Films
Shop
R29's Most Wanted