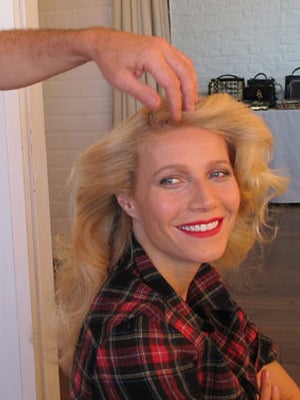 Perhaps you've forgotten that the half-nakie blonde bombshell on the cover of
Harper's Bazaar
also happens to be the same singin', dancin', cookin', and sometimes goofy GOOP lady, as well. Today we were reminded of this salient fact when we caught wind of the behind-the-scenes story that captures all the action of the cover shoot — from racks upon racks upon racks of wardrobe options (yes, we die) to beauty touch up after touch up.

One of our favorite moments? When the nearly 40-year old unintentionally presents a rather close competition of "Who Wore It Better" against Karlie Kloss—they both wore the same Anthony Vaccarello dress. While we wont pick a winner (because, well, it's nearly impossible), stylist Andrew Richardson did point out that Gwyn's overall outfits called for a more mature woman. "She's a gorgeous woman who is confident in her body, and I think it's much sexier to see these looks on her, rather than a 19-year-old model," he says. While the leading lady admits that she's not accustomed to such steamy attire, even behind the scenes, we don't suspect for a second that she's anything but a natural. Click over to see even more of the candid (and not so candid) shots. (GOOP)