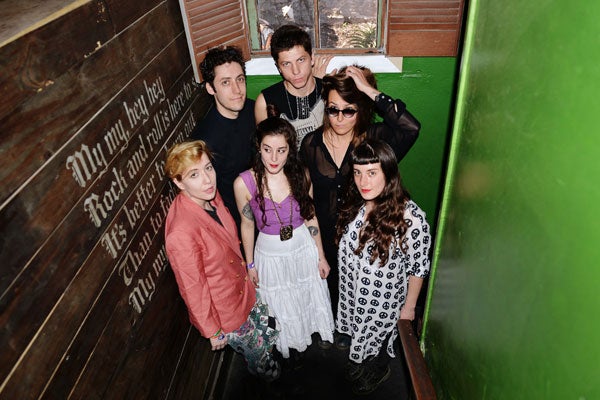 Drummer Maya Postepski lets us know that we shouldn't worry...her bandmates will join us soon. "As long as I'm here, they'll get here, eventually," she explains. And its true. Almost as if there was a magnetic pull, the other five members of Maya's band, Austra, showed up and sat down...without saying much. The band is a little spooky like that — finishing each other's sentences, understanding one another without even saying anything. Plus, Austra has identical twins Sari and Romy Lightman from Tasseomancy singing backup vocals — and though they sound the same, the style, hair, and vibe of both of the girls are shockingly different.
Advertisement
This sort of preternatural communication also occurs on stage, with Katie Stelmanis' haunting, operatic vocals guiding the group. Watching Austra would feel almost spiritual, with the striking twins and Stelmanis' intensity, if there wasn't such a strong, danceable beat. The Austra crowd isn't afraid to get down, but most follow the twins' lead and move with their arms waving in the air.
The six players, which are composed of four girls and two guys, are clearly close. When all together, the male components of the band, bassist Dorian Wolf and Ryan Wonsiak, are a bit quieter than the ladies, but that appears to just be how things shake out. "I'm not a 'guy' guy," says Wonsiak. "In fact, I'm kind of one of the girls." "We don't think of things like that," said Romy Lightman. "That's such a frustrating thing, when photographers want to separate us and divide us like that, like, the girls have to wear dresses and lipstick, and the guys are in suits."
"Usually," says Postepski, "the girls wants to wear suits and the guys want to wear the lipstick!" Strangely, each member of Austra has a particularly distinct style — from Stelmanis' patchworked jeans to Wonsiak's black lipstick and Nirvana shirt — even the twins dressed wildly different. Around Romy's neck was a heavy brass snake, which she explained was symbolic and is her current talisman. "It's the year of the snake, which means nothing is as it seems. So, I am keeping this with me to remind myself of that." Well, what does that mean for us? "Don't make any major decisions or act based on pure instinct. Take things slowly. Give everything a little more thought than you would."
GG Good Game
Twitch Is For Makeup Too – Just Ask Body Painter Melissa Croft
“Put some care into making sure you’re truly yourself.” That’s the takeaway for Twitch streamer Melissa Croft, which is interesting considering the
by Eleni Thomas
Movies
Leave Marilyn Monroe Alone
Content warning: This piece contains references to physical and sexual violence. When you think of tragic heroines of Hollywood’s golden age, your mind p
by Katherine Singh
Somos Latinx
Hocus Pocus 2’s Belissa Escobedo Also Practices Bruj...
Belissa Escobedo is a Los Angeles-raised Chicana, the biggest cat mom ever (self-proclaimed), a former theater kid, possibly America Ferrera’s long-lost
by Priscilla Rodriguez
Advertisement
Unbothered
The Meaning Behind Stormzy’s “Mel Made Me Do It”...
Stormzy dropped his new single Mel Made Me Do It casually the night of Thursday, September 22 and, within minutes, Twitter (his least favorite place) was i
by Nikki Onafuye
Unbothered
Don’t Worry Darling Is Peak White Feminism (As Expected)
Spoilers ahead. Don’t Worry Darling is the latest in a long continuation of movies that discuss female catharsis and misogyny but fails to acknowledge ra
by Haaniyah Angus
Somos Latinx
In Vampire Academy, Daniela Nieves Delivers a New Kind of ...
Ever since she was very young, Daniela Nieves has had a penchant for chit-chat.  “Once you know me, just as a person, I love to talk,” Nieves, the
by Mekita Rivas
Movies
Tyler Perry Makes A Pivot With A Jazzman’s Blues — But Doe...
This story contains spoilers for Netflix film A Jazzman’s Blues. Just months after resurrecting Madea for a film that no one asked for (Madea as Beyoncé
by Ineye Komonibo
Unbothered
The Problem With How We’re Talking About The Nia Long & Ime Udoka...
For as long as I can remember, Nia Long has been the woman of everyone’s dreams. She’s played some of the most adored characters in Black cinema, and h
by Tayo Bero
Movies
Don’t Worry Darling Can’t Overcome The Rumors
Spoilers ahead. In the world of Don’t Worry Darling’s Victory, a sun-cloaked desert planned community, 1950s-era gender roles are alive and things aren
by Katherine Singh
Unbothered
Sanaa Lathan Is A Director Now & On The Come Up Is Her T...
Welcome to “What’s Good,” a column where we break down what’s soothing, distracting, or just plain good in the streaming world with a “rooting fo
by Kathleen Newman-B...
Disney
How To Score A Disney+ Subscription (Even If It’s Just For ...
I say “Disney” you say “land,” or “world,” or perhaps now during the height of at-home streaming, you chime “plus
by Alexandra Polk
Unbothered
John Boyega Says He Only Dates Black Women — What’s The Issue?
British-Nigerian actor John Boyega is the latest subject of online discourse this week, and surprisingly, it’s not because of his stellar (and thirst-ind
by Ineye Komonibo
Advertisement
Advertisement
Discover
R29 Stories & News
Watch
R29 Original Series & Films
Shop
R29's Most Wanted