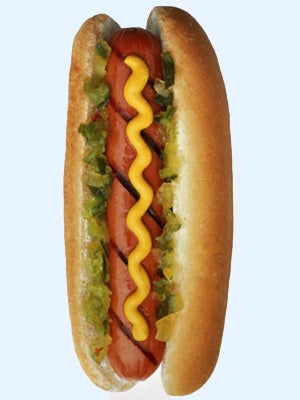 When it comes to Oscar de la Renta and Cathy Horyn's recent incident, there's that thing about beating a dead horse — but with Lady Gaga's recent participation in the whole ordeal, we'd like to lay it out, explain the verbiage, and close the book on this entire meat product misunderstanding. Beat the dead hot dog, if you will.
To catch any of you lucky enough to have missed this very important news event up, Cathy Horyn, in reviewing the Oscar de la Renta spring '13 show, stated:
"Mr. de la Renta is far more a hot dog than an éminence grise of American fashion. […] It was wonderfully cantankerous, a good bit of window-dressing for the gooey stuff that followed."
Advertisement
According to Mr. Merriam-Webster, éminence grise is defined as "a respected authority." A hot dog, on the other hand, is "one that hotdogs, a show-off." In context, surrounded by the other congratulatory language in the review, it's hard to see Cathy as meaning anything but praise in her usage. Later, she explained in the NYT blog to editor Margaret Sullivan that she meant for "hot dog" to convey the fact that Oscar is "a cool guy who's showing off his tricks," and not commenting on any sort of resemblance between the designer and nuclear orange-hued, tubed meat, which — sort of hilariously — lots of people (including Oscar de la Renta himself) took it to mean.
In haste, Oscar took a (probably very expensive) full-page ad out in WWD to publish an open letter to Cathy and flung a meat insult in her direction: "If you have the right to call me a hot dog why do I not have the right to call you a stale 3-day old hamburger? My advice to you is to abstain from personal criticism. Professionals criticize the clothes, not the people."
Anyway, the whole outcome was that Oscar probably realized his misinterpretation and publicly stated he wouldn't ban her from future shows, Cathy called the ad "over the top," and we're still waiting for that press photo of the two of them enjoying a Nathan's hot dog or something. That would only be fair.
End of story? Not quite. Yesterday, Lady Gaga took to Twitter to defend Oscar, tweeting, "@OscarPRGirl Bravo Oscar. Only you would be so chic as to purchase an entire page in WWD, making statements like a good fashion citizen" [now deleted]. So, as a public service announcement to all hot-dog enthusiasts and ODLR fans, please familiarize yourself with the aforementioned terms and definitions. You don't want to pull a Lady Gaga and seem like a chicken nugget or something. (WWD)
News
No, Trump Can’t Pardon Himself — Here’s Why
Donald Trump’s presidency is finally coming to an end. But one important question — other than whether Trump can run again in 2024 — is whether he is
by Sarah Midkiff
News
Rep. Nikema Williams Reveals Her Own History Of Making “Goo...
Many profiles of Georgia Representative-elect Nikema Williams remind readers of the gargantuan shoes she has to fill as she takes on the late John Lewis’
by Audra Heinrichs
News
A Black Transgender Woman Is Suing The Georgia Prison System For ...
Following allegations of mistreatment, Ashley Diamond, a Black transgender woman, is suing the Georgia Department of Corrections for sexual assault by both
by Elly Belle
News
No, Jake Tapper, Rashida Tlaib Is Not Antisemitic For Criticizing...
After implying that Congresswoman Rashida Tlaib is antisemitic on Twitter, CNN’s Jake Tapper is now being slammed for his bad faith comments. Following n
by Elly Belle
Donald Trump
Trump’s Retweets Of Randy Quaid Prove That Everything’...
We’re no expert, but a lot can be gleaned about where someone’s head is at based on what they like and retweet on Twitter — particularly if you are,
by Sarah Midkiff
News
Can We Please Stop Comparing Electoral Politics To Sex?
Discussing politics has often involved the use of, let’s face it, boring comparisons. Whether it’s chess or football or a relay race, political talking
by Danielle Campoamor
News
Reminder: Trump Once Accused A Thanksgiving Turkey Of Refusing To...
While it’s hard to speak positively of anything that happened in 2020 — the year of doom — one thing remains true: the internet has been so good to u
by Asia Ewart
News
Can COVID Affect Your Brain’s Functionality?
On Friday, news broke that Donald Trump Jr. (informally known as President Trump’s second-favorite son) tested positive for COVID-19 — and he is no
by Danielle Campoamor
News
Ted Cruz Dared People To Come For His Turkey, Instead Twitter Cam...
Just when you think Ted Cruz — one of perhaps the most universally mocked Senators in America — is taking a break from putting his foot in his mouth fo
by Asia Ewart
News
Trump Lost The Election. Why Do His Supporters Refuse To Believe It?
President Donald Trump and his allies have spent weeks now attempting to subvert the results of the 2020 election in increasingly desperate ways, relying p
by Natalie Gontcharova
2020 Election
Here Are 21 GOP Senators Who Privately Hate Trump, But Refuse To ...
To say that the entire Republican party has been complicit in outgoing President Donald Trump’s undermining of the 2020 presidential election results
by Danielle Campoamor
News
This Is Why Abortions Weren’t Available In South Dakota For...
With the Supreme Court taking a new direction with the addition of Amy Coney Barrett, many are concerned about Roe v. Wade and what will happen to abortion
by Elly Belle
Discover
R29 Stories & News
Watch
R29 Original Series & Films
Shop
R29's Most Wanted