Skip navigation!
Story from Beauty
"Hi, guys! Ok. Welcome to my channel," Yasmin Maya, known as BeautyyBird to her 1.1 million Instagram followers, began her first-ever YouTube video in November 2012. The vlogger's bubbly persona projected through the screen as she explained what to expect from her new channel. What viewers didn't know was the pain behind it all — a pain that involved separation from her family and an unforeseeable future at home.
Courtesy of Yasmin Maya.
Yasmin Maya with her parents and siblings.
Maya spent most of her life in Carpinteria, California, but at age 18, she found herself back in her birthplace of Mexico as she tried to work out the legality of her U.S. citizenship. After witnessing her parents get deported while she was in high school, Maya feared a similar reality would meet her as an undocumented immigrant — as is the case for more than 200,000 individuals each year. With that anxiety in mind, as well as the fact that she couldn't apply to colleges or receive financial aid, the teenager made her way to the border town of Tijuana. As her parents traveled back to California after resolving their own legal status, Maya found herself leaving behind her family, her husband, and the place she called home for a significant part of her life. "It was the hardest decision ever," she tells Refinery29 during a video interview. "But if I was going to have at least a chance of fixing my papers, then I wanted to take it, drop my entire life here, and move out there by myself."
Advertisement
During her three years in Mexico — with her U.S. residency filed — Maya experienced loneliness living on her own with only occasional visits from her husband, which ultimately affected her mental health. That's when her mom encouraged her to follow in the footsteps of her favorite YouTubers, which included Dulce Candy and Nicole Guerriero, and start a beauty channel. She recalls her mom sending her a small red camera and a few makeup products, and in 2012, BeautyyBird was born. "It was an outlet to keep me from crying on my couch," Maya says. "It was this way of looking forward to something in my day, even if nobody was going to follow."
Courtesy of Yasmin Maya.
Yasmin in the early days of her YouTube career.
What Maya didn't expect was for her page to take off the way it did. "It's just a miracle knowing that it grew into what it is now," she says. With over 1 million subscribers on YouTube and videos in both English and Spanish, Maya grew a community over the last eight years on a platform that was once only a means of escape — and eventually made her way back to California as a U.S. resident. Now, she's finding power in making her dreams come true with the launch of her brand, Birdy Lashes, inspired by her love for her desert-island beauty pick: false lashes.
Advertisement
The brand, which launches today, features two faux-mink lash styles (Gemini and Dream) and two eyeliner-glue hybrids in black and clear — all priced at $12. Birdy Lashes aims to simplify wearing falsies with easy application, and provide luxury at an affordable price. What's more, you'll find cultural nods — like those seen in the promo video, which was filmed in Mexico — and images with Latinx faces, along with Maya wearing a charro suit (the traditional style of dress originating in Mexico). "Latinx people are not just this moment or trend. We always need to be included," she says. "I want to show that. I want to have my people know that we are going to be represented."
shop 4 products 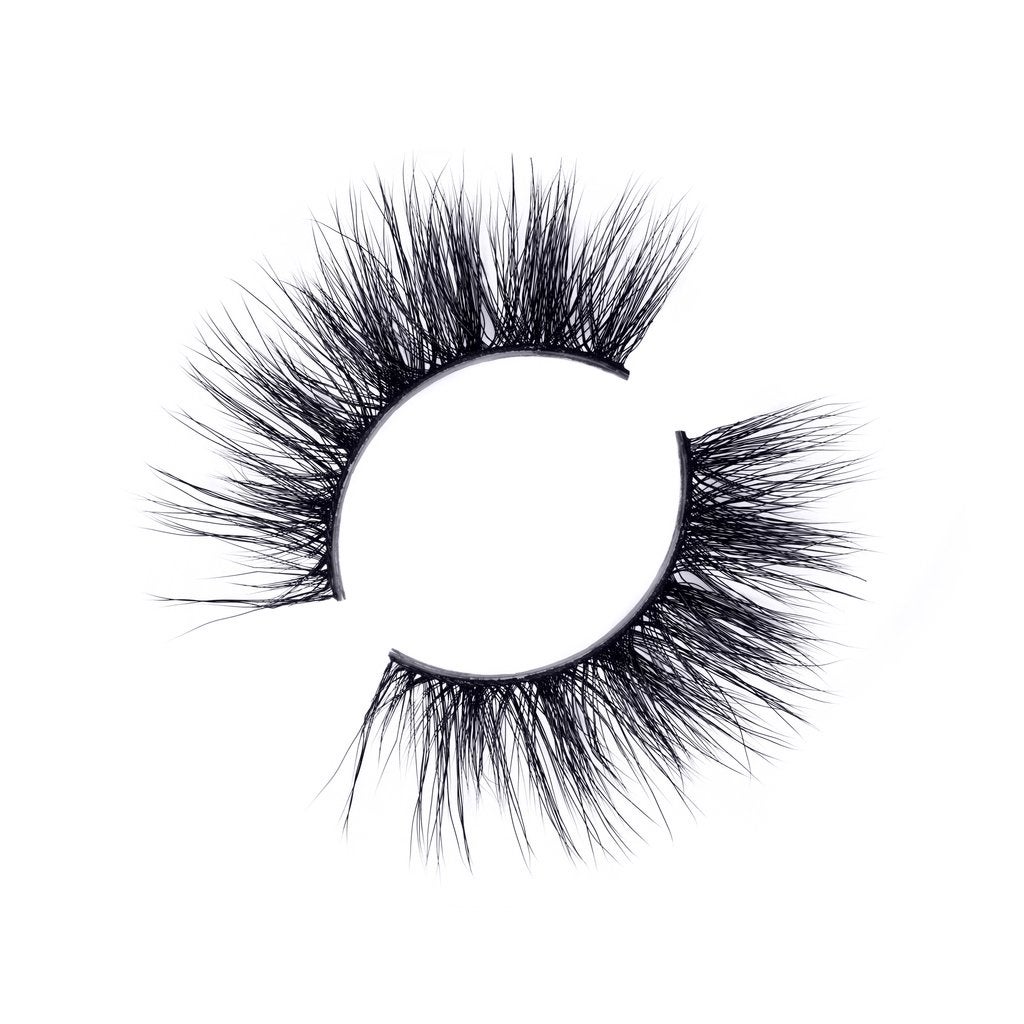 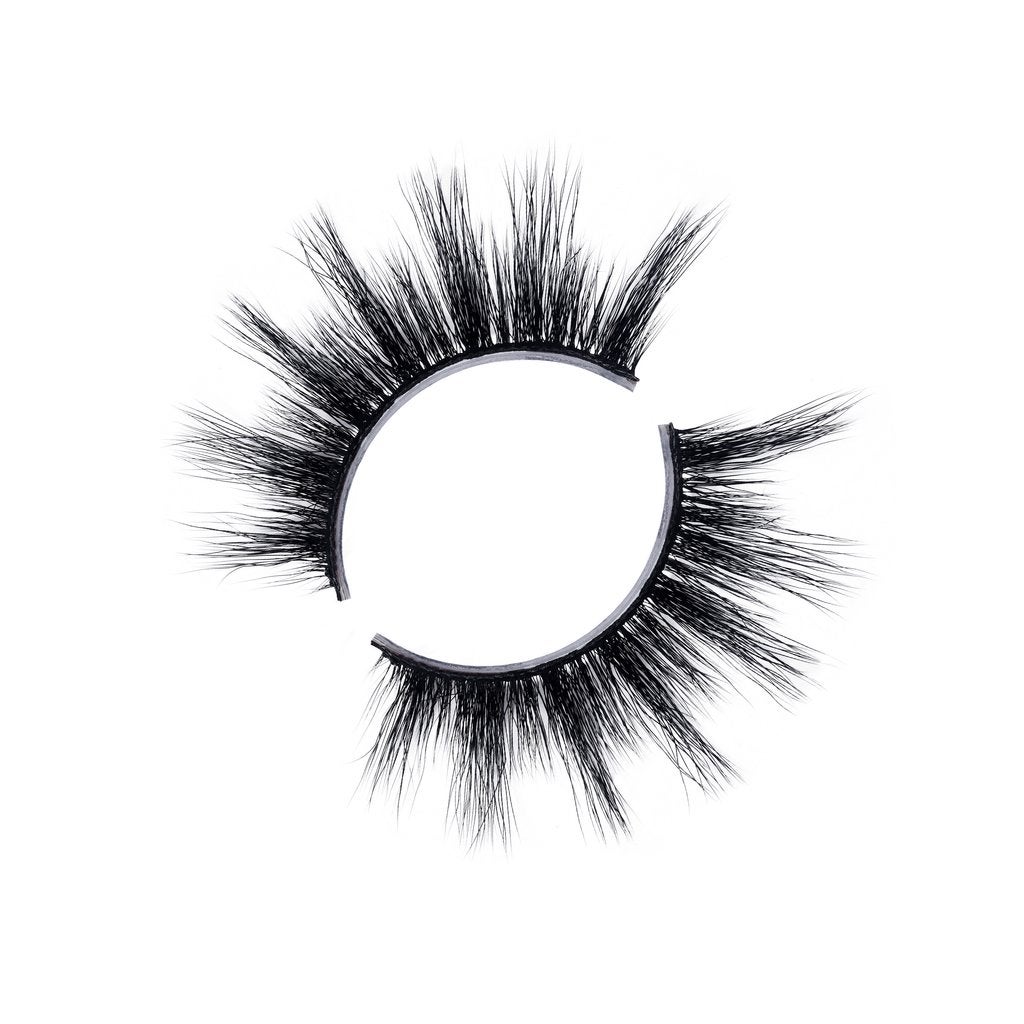 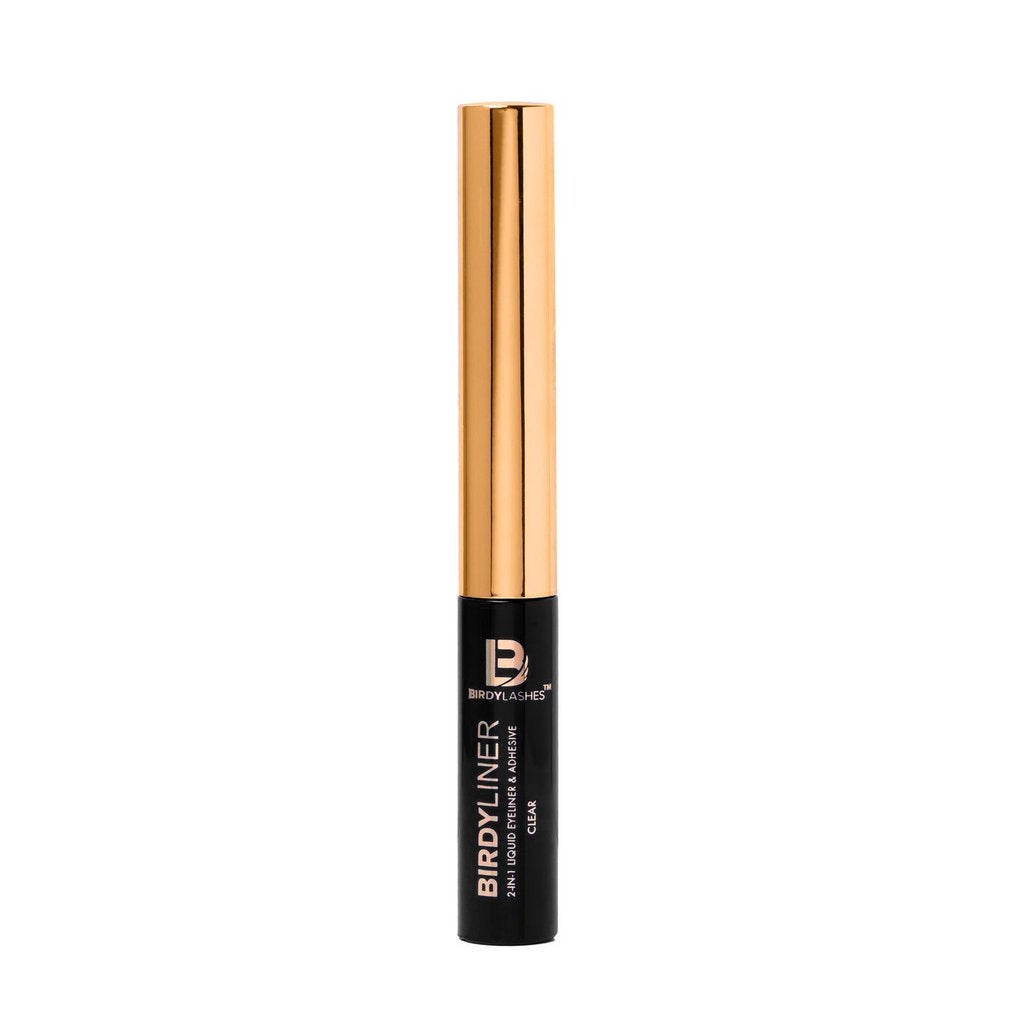 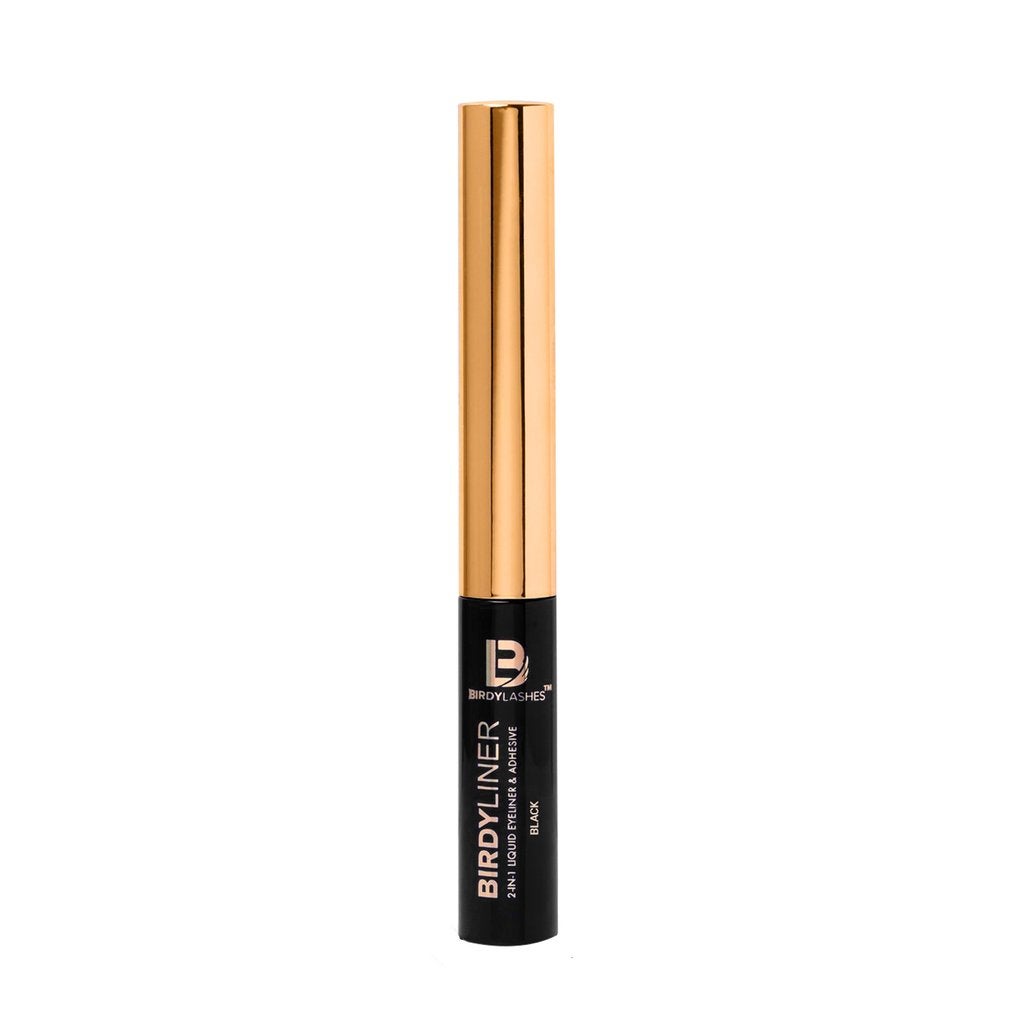 Birdy Lashes
Birdyliner Eyeliner - Black
$12.00
Birdy Lashes
This cultural pride is a full-circle moment for the beauty influencer, who admits to once being ashamed of not only her family's legal status, but also her roots when first starting a YouTube channel. It wasn't until she accidentally left Mexican music playing in the background in one of her videos, to the delight of viewers, that she realized her origin story was nothing to be embarrassed by. "For the longest time, I felt ashamed," Maya admits. "Then, eventually I felt like, 'Why should I hide it?'"
Courtesy of Birdy Lashes.
Yasmin Maya.
Now, her story, her dreams, and her culture are at the forefront. As she looks to the future of her brand — which she teases has plenty more to come — Maya is ready to inspire undocumented immigrants and children of immigrants who might not believe in their own future as she once didn't. She hopes to show everyone that your vision should never be limited, no matter what comes your way or where your legal status lies. "I didn't know if I was ever going to have that hope of seeing the light at the end of the tunnel, but knowing I can be someone's light and in a way let them know: 'There's hope. You can have a life after this,'" she says. "We're still trying to fight how we are seen, but our legal status shouldn't define us. If I had something to tell them, it's to continue fighting and know that I am fighting for them."
At Refinery29, we’re here to help you navigate this overwhelming world of stuff. All of our market picks are independently selected and curated by the editorial team. If you buy something we link to on our site, Refinery29 may earn commission.
Advertisement
Beauty
I’m A Beauty Brand Founder & This Is What My Routine Looks ...
Babba C. Rivera is an award-winning brand-marketing professional and Forbes 30 Under 30 alum who’s held roles at companies like Uber and Away. She fo
by Rachel Krause
Celebrity Beauty
Selena Gomez’s “Blue Raspberry” Manicure Is A S...
If your choice in nail polish tends to ebb and flow with the seasons, you might find yourself Googling “trendiest summer nail colors” before yo
by Megan Decker
Skin Care
Alicia Keys Says This Is Her Biggest Tip For Glowing Skin
Your skin’s glow is not a single-factor equation. Yes, a good product routine — one that includes gentle exfoliation and ample hydration — is par
by Megan Decker
Advertisement
Celebrity Beauty
Kate Mara Dyed Her Hair Icy Platinum — & It’s So Chic
Kate Mara often bounces between blonde and brunette hair color. Sometimes it’s a bronde or ombré situation, though her most recognizable shade is a
by Megan Decker
Celebrity Beauty
Sophie Turner Dyed Her Hair Red For The First Time Since Game...
It looks like Sophie Turner is a redhead again. On Sunday afternoon, the actress was spotted at an Atlanta Braves baseball game with husband Joe Jonas, but
by Megan Decker
Beauty
Kate Winslet’s Beauty Philosophy Involves Nurturing The Min...
Kate Winslet has played many roles throughout her decades-long career, and in addition to her Oscar and Golden Globe statues, she’s gained one other
by aimee simeon
Celebrity Beauty
Harry Styles Just Registered A Beauty Company
May we have your attention please: Harry Styles may be launching his own beauty brand. In mid-May, the 27-year-old Gucci model and “Watermelon Sugar
by Megan Decker
Ariana Grande
Yes, Ariana Grande Wore A Bridal Ponytail To Her Wedding
On Saturday, May 15, Ariana Grande married Dalton Gomez, a luxury real-estate agent and her boyfriend of over a year. From initial reports, we learned that
by Megan Decker
Makeup
How Gia Seo Finds Beauty Inspiration In Color Theory & Roald Dahl
For some, a lipstick is just a lipstick. But for others, it’s a source of strength, creativity, and expression. In our series Power Faces, we
by Rachel Krause
Celebrity Beauty
Emma Corrin Got Curtain Bangs — & The New Look Is So ’90s
The Crown‘s Emma Corrin has taken inspiration from the boy bands of the ’90s, showing off a new, bleached-blonde haircut with long curtain bang
by Jacqueline Kilikita
Celebrity Beauty
Justin Bieber Just Shaved His Head For Summer
Chalk it up to the California heat or the metaphorical heat from critics of his ill-advised locs, but Justin Bieber is heading into summer with a fresh new
by Megan Decker
Celebrity Beauty
Machine Gun Kelly & Megan Fox Make A Case For Matching Couples Na...
Megan Fox and Machine Gun Kelly attended the Billboard Music Awards last night showing off another shared beauty affinity, in addition to their mutual love
by aimee simeon
Advertisement
Advertisement
Discover
R29 Stories & News
Watch
R29 Original Series & Films
Shop
R29's Most Wanted