Skip navigation!
Story from Celebrity Beauty
Taraji P. Henson has a miraculous ability to make every hairstyle look good. From silk-pressed bobs to teased-out coils and waist-length ponytails, there's hardly a Henson style we don't immediately double-tap. But before becoming an Oscar-nominated star with a long résumé of hit shows and films, she was an up-and-coming actress who had no say over which hairstylist worked her magazine shoots.
"I was brand-new and didn't have the power to request someone on set, but I knew for a fact I needed someone familiar with Black hair," she says. "This stylist put liquid root booster on my hair. He didn't have any tools I could use to fix it myself, so I had to go through my shoot with helmet head."
Advertisement
That scenario is all too familiar for many Black women and Black actresses in Hollywood — and after decades in the business, it's still familiar to Henson, who says she's had repeat incidents even since receiving an Oscar nomination (as Best Supporting Actress for her role in The Curious Case of Benjamin Button) and a star on the Hollywood Walk of Fame. Her story, along with so many others, paints a broader picture of a glaring lack of knowledge of diversity in the hair department. But for Henson, the perennial quest for the perfect products to care for her hair between jobs led her to where she is today: launching her hair-care brand, TPH by Taraji, available now at Target in stores and online.
“

"Not all of my supporters look like me, but that's the beauty of hair — it's unique to everyone."

Taraji P. Henson
”
Her celebrity has given her the ideal platform to launch the brand-new line, but Henson's interest in hair care long predates her fame. "Growing up in D.C., I went to the salon every week as far back as I could remember, and I always felt connected to my stylist because she had healing hands," she says. "She took care of my hair." That relationship fostered a personal interest in her own routine. "I went into Hollywood with a great understanding of caring for my hair," Henson explains. "But when I got there, I heard horror stories from my peers about the damage you could endure if you used your natural hair for production."
So Henson opted to wear protective styles like wigs and weaves to preserve her natural hair, a decision that wasn't without its own trial and error. "The first time I ever got a weave was for Hustle & Flow [in 2005]," she says. "I had wet-and-wavy hair, but I didn't know that you were still supposed to dry it after it got wet." She learned that the hard way when the sew-in weave was removed — and the braids underneath had a foul mildew smell from not being dried completely.
Advertisement
What sounds like a beauty horror story had a silver lining in the long run, because that faux pas sparked Henson's interest in scalp care. "I tried the age-old hack of dousing your braids in Sea Breeze astringent, but that only masked the smell, it didn't remove it," she says. "So I started making my concoctions with oils and natural ingredients to treat my scalp, and I couldn't believe something like this didn't exist at the time." True to Henson's scalp-first philosophy, TPH's core products are scalp-specific treatments, including a wash, conditioner, serum, and scrub. 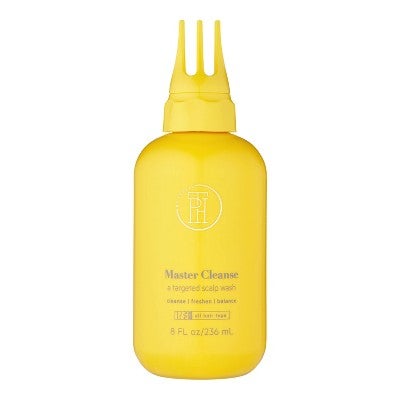 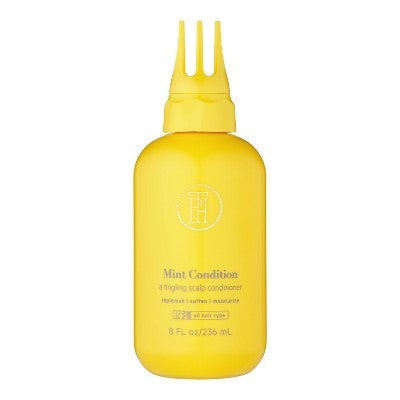 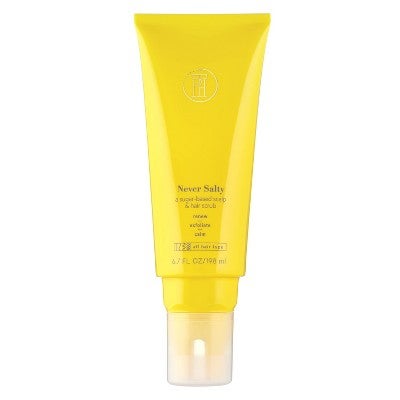 TPH
Tph By Taraji Never Salty Sugar Scalp Scru...
$13.99
Target
Also part of the collection is a wide variety of styling products, from leave-in conditioner for curls to heat-protectant sprays for straight hair. "It was important for me to have all these products available because I know better than anyone that different styles and textures have different needs," Henson says. "Not all of my supporters look like me, but that's the beauty of hair — it's unique to everyone."
Ten years and a few teachable hair moments later, Henson is happy that she and people like her are a few products closer to healthy hair. It's been a long ride, but it's only the tip of the iceberg for the actress-turned-beauty entrepreneur. "This is only the beginning," she says. "I am so happy that people have access to helpful products and conversations that keep them informed because, as an actress, I can only give you your best shot if I feel confident — and everyone has a right to feel that way."
Advertisement
At Refinery29, we’re here to help you navigate this overwhelming world of stuff. All of our market picks are independently selected and curated by the editorial team. If you buy something we link to on our site, Refinery29 may earn commission.
Related Content:
Advertisement
Unbothered
The Hair Porosity Test Changed The Way I Treat My Natural Hair
I’m in the bathroom and it is wash day. I’ve just finished a marathon event of washing and detangling my ‘fro before I take a stray clean strand of h
by L'Oréal Blackett
Beauty
This Scalp Serum Combats Hair Loss — & It’s Influencer-Approved
When Dallas-based lifestyle influencer/blogger Dani Austin Ramirez started experiencing hair loss, she not only adjusted her beauty routine to alleviate tr
by Jinnie Lee
Unbothered
In The Battle Of The Braiders, African Aunties Will Always Win
It’s 23 degrees celsius on a late Saturday afternoon in Peckham, south-east London, and I’m squeezing my way through a dense crowd of people on Rye Lan
by Yolanthe Fawehinmi
Advertisement
Unbothered
Leave Blue Ivy’s Hair Alone
On Monday night (June 13), during Game 5 of the 2022 NBA Finals, the Golden State Warriors beat the Boston Celtics 104 to 94. But it appears many people’
by Wisdom Iheanyichukwu
Beauty
‘Hair Frosting’ Looks As Delicious As It Sounds
Though we’re not far into 2022, salon experts have been busy predicting (and cementing) the haircut, color, and styling trends that are going to
by Jacqueline Kilikita
Beauty
Why So Many Black Women (Including Me) Are Giving Weaves A Second...
Growing up in the 2010s, long before lace front wigs ruled the Black hair world, a sew-in weave — hair extensions perfectly melded to your hair — was t
by Ata-owaji Victor
Beauty
Where You Can Buy The New & Improved Dyson Airwrap
When the Dyson Airwrap first launched back in 2018, it changed everything we thought we knew about hair-styling tools. Four years later, the brand’s
by Karina Hoshikawa
Beauty
13 Hair Colors Trending For Summer
by Jacqueline Kilikita
Most Wanted
Ceremonia’s New Beach Waves Salt Spray Is The Answer To Our...
Your summer just got a lot saltier — in the absolute best way. Ceremonia, the Latinx-owned clean hair-care brand, answered our prayers for non-crunchy be
by Mercedes Viera
Unbothered
Could ‘Hair Autonomy’ Be The Next Big Natural Hair Movement?
The last hairdresser I spoke to left me with a very conflicting message: “It’s time you care much less about your hair,” she said. To clarify, Br
by L'Oréal Blackett
Beauty
I Got “Effortless” Bangs — But I Have A Few Regrets
I needed a new haircut when I strolled into a local salon and asked for face-framing, eye-grazing bangs. I’d been dabbling with the idea for just a f
by Fiona Ward
Most Wanted
A Beauty YouTuber’s 3-Step Routine For Defined & Bouncy Curls
When it comes to curls, YouTuber and content creator Chloe Homan knows how to chat. Known by her online moniker Frizzandfrillzz, Homan has built an online
by Karina Hoshikawa
Advertisement
Advertisement
Discover
R29 Stories & News
Watch
R29 Original Series & Films
Shop
R29's Most Wanted