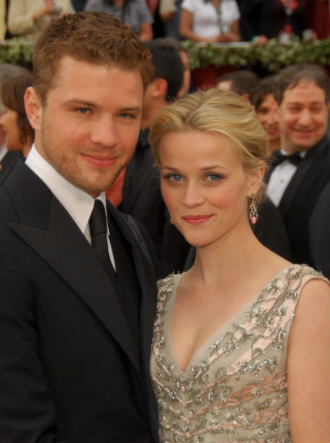 Photo: BEImages/Jim Smeal.
Exes are supposed to hate each other. That's the way it's always been — but not necessarily the way it has to be. Some famous former spouses are proving that after divorce, relationships can evolve into something new. While Gwyneth Paltrow and Chris Martin were seen as pioneers for their high-profile "conscious uncoupling" earlier this year (and for the friendship they've maintained since then), another pair of Hollywood exes mastered the art of the post-breakup relationship long before Gwyneth and Chris.
Ryan Phillippe and Reese Witherspoon have become the poster couple for what's possible after the disintegration of a romantic relationship. Despite a tumultuous end to their seven-year marriage (Phillippe was said to have been unfaithful with actress Abbie Cornish) the pair have remained amicable, which has been hugely beneficial to their children, Ava, 15, and Deacon, 10.
Advertisement
In a recent interview with HuffPost Live, Phillippe discussed how they've been able to make it work. "It's a feeling-out process," he said. "I think we've gotten to a really great place. It's going well, and she's happy and remarried, and our kids are incredible. I'm proud of the way we've handled it and who our little people are."
Phillippe and Witherspoon first met at the actress' 21st birthday party, way back in 1997. The following year, they teamed up for Cruel Intentions, which, according to Phillippe, his kids can barely fathom. "[Reese] was just in New York doing press for Gone Girl and Wild and we got to meet up as a family and took a walk through Central Park with the kids, and it was funny," Ryan said of his family time. "We were reminiscing then, because we shot a lot of Cruel Intentions [around the park], so there we were, with Ava and Deacon, talking, and they were tripping out on the fact that we [had been] there, shooting a movie, before they were even a thought in our minds."
So, that's how it's done, people: Shoot a movie in Central Park, raise a family, and nearly 20 years later and post-divorce, bring said family to back Central Park to reminisce. Easy as pie. (Us Weekly)
Unbothered
Actually, Netflix, Content Like Dave Chappelle’s Transphobic Come...
Update: Netflix has fired the employee who was organizing an upcoming walkout (set to happen Wednesday, October 20) of trans staffers and allies in protest
by Kathleen Newman-B...
Unbothered
Years After Her Death, The Science Community Is Still Treating He...
In the 1950s, a Black woman named Henrietta Lacks walked into Johns Hopkins Hospital to be treated for cervical cancer, and her cells would go on to b
by Ineye Komonibo
Somos Libres
Why Black Puerto Rican Women Are Leading an Anti-Racist Media Ren...
While the 2020 Census was essential to many communities across the United States, it held a different meaning for Puerto Ricans. Battered after a decades-l
by Frances Solá-Sant...
Advertisement
Unbothered
R. Kelly Facing Life In Prison After Being Found Guilty Of Racket...
This story contains discussion of sexual violence. Please proceed with care. Updated September 27, 2021: Months after being charged and indicted for nine g
by Ineye Komonibo
Unbothered
Jennifer Hough’s First On-Air Interview About Nicki Minaj &...
*Editor’s note: this story contains discussions about sexual violence, threats, and intimidation. Please read with care.  A month after publicly all
by R29 Unbothered
Unbothered
CBS Will Now Turn Its Controversial Activist Competition Series I...
Updated September 16, 2021: After a wave of backlash followed the announcement of its controversial new series, CBS is going back to the drawing board to r
by DarkSkyLady
Unbothered
Megan Thee Stallion Wins Two Big Legal Victories — Against Her La...
Megan Thee Stallion scored two major legal wins this week, after a judge granted her the go-ahead to release the remix of BTS’ Butter that she is feature
by Tayo Bero
Unbothered
American Idol Alum Syesha Mercado Is Still In The Midst Of...
Singer and American Idol alum Syesha Mercado has regained custody of one of her two young children who were taken from her by authorities in Florida. Merc
by Tayo Bero
Unbothered
The Woman Assaulted By Nicki Minaj’s Husband Is Setting The Recor...
*Editor’s note: this story contains discussions about sexual violence, threats and intimidation.  Jennifer Hough —  who was assaulted by Nicki Minaj?
by Tayo Bero
Entertainment News
What You Need To Know About R. Kelly’s Trial That’s B...
This story contains discussion of sexual violence. Please proceed with care. On August 18, singer and producer R. Kelly will finally face trial for a litan
by Natalie Morin
Entertainment News
‘Self-Made Legend’: Lil Nas X On Being A Gay Icon And...
Lil Nas X has had an amazing year but like anyone in the early stages of a career on the rise, the journey hasn’t come without its share of struggles, do
by Tayo Bero
Entertainment News
Britney Spears’ Dad Is Finally On His Way Out Of Her Conservatorship
In a surprising and sudden development in Britney Spears’ ongoing conservatorship battle, her father has finally decided to step down from her conservato
by Natalie Morin
Advertisement
Advertisement
Discover
R29 Stories & News
Watch
R29 Original Series & Films
Shop
R29's Most Wanted