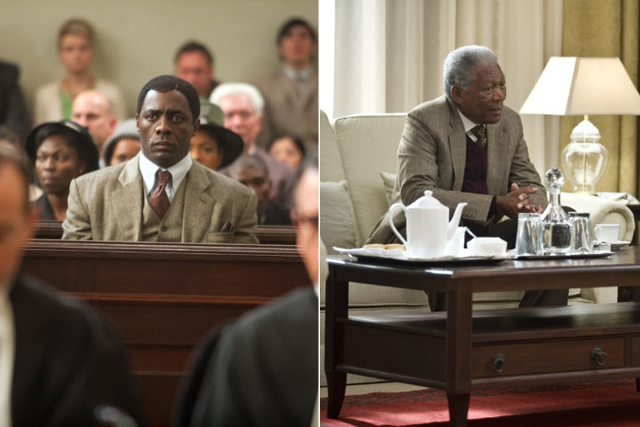 Photos: Courtesy of Warner Bros. and The Weinstein Company/Keith Bernstein.
As the world mourns the passing of Nelson Mandela, scores of celebrities, activists, and politicians have taken to social media to pay their respects. But, not many of these high-profile fans can say they've actually played the South African civil rights leader on the big screen. Not so with actors Morgan Freeman and Idris Elba. The actors each released statements sharing their sorrow, as well as their gratitude for the opportunity to have brought Mandela's legacy to life.
Elba, star of The Wire and Luther (a.k.a. the best series on Netflix you're not watching), portrays the Nobel laureate in the upcoming biopic Mandela: Long Walk To Freedom. "I am stunned at this very moment, in mourning with the rest of the world and Madiba's family," Elba said in a statement. "We have lost one of the greatest human beings to have walked this earth, I only feel honoured to be associated with him. He is in a better place now."
Freeman played Mandela in 2009's Invictus, which depicts the political climate when the newly-elected president was uniting the country behind the national rugby team in 1995. In a statement as eloquent as any of his silver-screen monologues, Freeman took an inspirational stance. "Nelson Mandela was a man of incomparable honour, unconquerable strength, and unyielding resolve — a saint to many, a hero to all who treasure liberty, freedom and the dignity of humankind," Freeman wrote. "As we remember his triumphs, let us, in his memory, not just reflect on how far we've come, but on how far we have to go. Madiba may no longer be with us, but his journey continues on with me and with all of us."
It's clear that stepping into the shoes of one of the world's most iconic leaders did more than just lengthen these actors' resumés. (NME)
Unbothered
When Will Michael Che Face Consequences For Punching Down On Blac...
SNL host, writer and comedian Michael Che is showing zero remorse for crude comments he made about gymnastics legend Simone Biles, after she withdrew from
by Tayo Bero
Unbothered
DaBaby’s “Apology” Proves He’s Not Really Sorry For Homophobic Co...
After days of backlash for making homophobic comments on stage, rapper DaBaby offered an “apology” — and it’s not a good one. If you were hoping fo
by Tayo Bero
Entertainment News
Britney Spears’ Father “Profited Handsomely” Fr...
Britney Spears’ new lawyer is making good on his promise to “aggressively” file a petition to remove her father Jamie Spears from the pop star’s co
by Natalie Morin
Advertisement
Entertainment
Prosecutors Seek To Add Damning New Evidence In R. Kelly’s ...
This story contains discussion of sexual violence. Please proceed with care. The 2019 release of explosive documentary Surviving R. Kelly played an importa
by Ineye Komonibo
Entertainment News
Britney Spears Accuses Her Father Of Conservatorship Abuse In New...
For the second time in less than a month, Britney Spears spoke out in court, doubling down on allegations against her father, Jamie Spears, and reportedly
by Natalie Morin
Entertainment
You Think You Know Dove Cameron, But You Actually Have No Idea
You've seen her on Disney. You've heard her sing. And she's done caring what everyone else thinks.
by Maria Sherman
Entertainment
Drake Bell Is Sentenced To Probation & Community Service In Child...
In June 2021, former child actor Drake Bell was charged with attempted child endangerment and disseminating matter harmful to juveniles in a disturbing cas
by Ineye Komonibo
Entertainment
James Franco Reaches A Million Dollar Settlement In The Sexual Mi...
This story contains description of sexual abuse — please read with care. Almost two years after a class action lawsuit launched by former students of his
by Ineye Komonibo
Entertainment News
Drake Bell Pleads Guilty To Child Endangerment Charges
The legal firestorm surrounding Drake Bell just took a complicated turn after the former child star’s plea to the disturbing misdemeanor and felony c
by Ineye Komonibo
Entertainment News
Chris Brown Is Under Investigation Over Alleged Battery Of A Woman
Chris Brown is under investigation again. Brown is accused of striking a woman during an argument on June 18. According to a spokesperson for the Los Angel
by Sydney Clarke
Pop Culture
Despite Their Rift, Meghan & Harry’s Daughter’s Name Has Major Ro...
Meghan and Harry, the Duchess and Duke of Sussex, confirmed via a spokesperson that they welcomed their second child on Friday, June 4. The baby, a girl, w
by Lauren Le Vine
Culture
Naomi Osaka And The Necessity Of Refusal
On Monday, tennis champion Naomi Osaka announced that she was withdrawing from the French Open tournament in order to protect her mental health. Days
by Breya Johnson
Advertisement
Advertisement
Discover
R29 Stories & News
Watch
R29 Original Series & Films
Shop
R29's Most Wanted