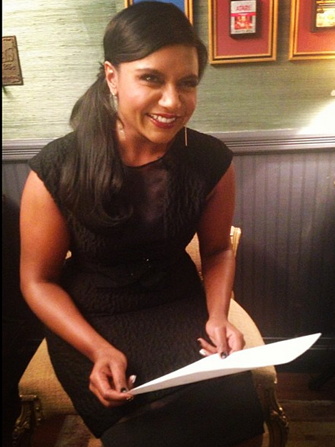 Photo: via @mindykaling.
Before there was The Mindy Project, there was Roseanne. And, Mindy Kaling hasn't forgotten that. "This sounds trite, but Roseanne fought a lot of fights so that people got accustomed to a strong kind of woman," Kaling recently said during a TV titan power lunch with Ms. Barr.

The New York Times
had the brilliant idea to get to the two category-defying, cross-generational comedy pioneers together for a conversational interview that, it turns out, was long overdue.

On breaking into the boy's club, Kaling said, "I think I’m lucky to come at a time when women with their own shows are probably writing them and producing them, like Tina Fey and Amy Poehler."
Advertisement
Barr sees the chain of female TV comedians stretching back long before Fey's arrival, or even her own career. "I had support from other women in Hollywood, specifically Marlo Thomas," recalled Barr. "Marlo and Lucille Ball, they were the first women. Marlo told me that Lucy came to the set and laughed at everything Marlo did. And she told the network: This girl is it! And coming from Lucy, who pretty much invented the sitcom, it really made a difference. We had amazing women in TV before me."
Barr and Kaling both claimed that because no one really wanted to develop their TV shows (Roseanne and The Mindy Project, respectively), they were forced to take matters into their own hands — and show people what they didn’t know they were missing. As Kaling put it, “It’s hard enough to make it if you’re a thin, conventionally attractive woman." She added, "Sometimes when you have a show and you’re a trailblazer, people say: 'Oh, she’s not a stick,' or 'Oh, she’s not rich.' People forget to say: 'Oh, and she’s also really funny.'"
Barr could relate to the narrow-mindedness. "Way back, when I was in the comedy clubs, I’d be introduced as: 'Now we have a woman comic.' I always despised that — like I was a freak. I wasn’t the funniest woman in the club, I was the funniest person. Period. And I think every good comic feels that way."

The women admitted that the frenetic pace of the industry takes its toll in other ways. Like dating. Barr wearily retraced the standard industry work/life conundrum: “When you’re working and your career’s happening, your relationships suck. It’s kind of the rule, I think. And when you’re not working, you can have a good relationship. But when you try to mix the two, something loses.”
Kaling added: “You have to be selfish to get things done in this business, and that can be hard, too.”

But, Barr rounded it out on a high note. Not being afraid to put yourself first can be pretty damn satisfying. “I don’t imagine it gets any better than waking up and doing exactly what you want. It’s pretty awesome.” Amen.
(NYT)

Black Friday
We’re Diving Headfirst Into These Black Friday Streaming Deals
When prepping our Black Friday and Cyber Monday shopping wishlists, lots of must-have items come to mind each year: big-ticket home items, covetable fashio
by Amanda Randone
Unbothered
Bruised Isn’t Great, But Halle Berry And Sheila Atim Are
Welcome to “What’s Good,” a column where we break down what’s soothing, distracting, or just plain good in the streaming world with a “rooting fo
by Kathleen Newman-B...
Unbothered
William Jackson Harper In Love Life Is The Chaotic But End...
I just can’t stop thinking about the new season of HBO Max’s Love Life. More specifically, I can’t stop thinking about William Jackson Harper in the
by Ineye Komonibo
Advertisement
Somos Latinx
The Latinx Students of Bayside Want to Know Why Schools Don’...
Correction: An earlier version of this article referred to Castilian Spanish, which is the type of Spanish spoken among most Spanish-speakers around the wo
by Cristina Escobar
Unbothered
Black Selling Sunset Stans, It’s Our Time
When Netflix first dropped Selling Sunset, the world wasn’t sure of how interesting a series about the personal and professional lives of the agents of T
by Ineye Komonibo
Unbothered
King Richard May Be About Richard, But Its Strength Is Sho...
When Venus and Serena Williams first rocketed into the tennis stratosphere, no one could have imagined the indelible impact that the sister duo would have
by Ineye Komonibo
Unbothered
Two Men Convicted For The 1965 Assassination Of Malcolm X Have Be...
Nearly 60 years after the shocking assassination of civil rights leader Malcolm X, a new development in the investigation into his murder has led to t
by Ineye Komonibo
Entertainment
Sister, Sister: King Richard Stars Saniyya Sidney & Demi S...
Welcome to The Come-Up, where rising Gen-Z talent checks in on their way to the top. In this edition, we’re catching up with dynamic duo Saniyya Sidn
by Ineye Komonibo
Entertainment
You’ll Definitely Have The High Ground With These Out Of Th...
by Ray Lowe
Unbothered
The Banning Of George M. Johnson’s All Boys Aren’t Blue ...
George M. Johnson’s All Boys Aren’t Blue, a coming-of-age essay collection about growing up Black and queer in New Jersey, was reportedly removed from
by Stephanie Long
Unbothered
The Devastating — And Divisive — Ending Of Passing, Explained
This story contains major spoilers for the Netflix film Passing.  The ending of Rebecca Hall’s Passing is ambiguous and shifting, perhaps even more so t
by Nylah Burton
Entertainment
Jimmy O. Yang As A Lead Love Interest Is Everything I Needed As A...
Seconds into Love Hard’s trailer, I was audibly excited bopping along to the upbeat track and a glowing Nina Dobrev. Netflix Christmas movie season is up
by Maggie Zhou
Advertisement
Advertisement
Discover
R29 Stories & News
Watch
R29 Original Series & Films
Shop
R29's Most Wanted