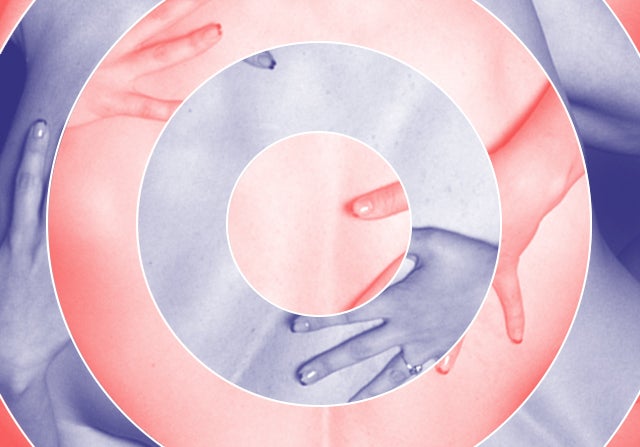 Illustrated by Austin Watts.
It happens to the best of us — a bad day at work necessitates a stop at the supermarket for a favorite pint of Ben & Jerry’s. While there's nothing inherently wrong with a little comfort food every now and then, if you find that you can’t stop yourself once you start (to the point where you eat a whole cake or a party-sized bag of chips), you might be one of potentially millions of people who have binge eating disorder.
According to the Daily Mail, psychiatric organizations have started to recognize binge eating as a mental disorder, classifying it, along with anorexia and bulimia, as an eating disorder. Similar to bulimia, binge eating disorder is characterized by compulsive eating, only in this case, there's no purge. It is often accompanied by depression, and the bingeing is usually done in secret. People with the disorder often choose to eat food that is high in fat and sugar, since it gives you a high (albeit a fleeting one).
In a telling, emotional profile, the Daily Mail interviewed several people personally affected by binge eating. Their stories offer a window into this difficult and complicated disorder.

In the past, binge eating has been treated with dieting or antidepressants, neither of which touch the heart of the problem. Binge eaters can often diet and lose weight for a few months, but the problem of bingeing returns sooner or later. Antidepressants can help manage a binge eater’s depression, but this treatment doesn't address the source of the issue or offer a long-term solution. So, what are the benefits of classifying the issue as a psychiatric disorder? With more careful study of how our brains respond to the food we we eat (and why we eat it), more specific, successful treatments could be on the horizon.
Click through to read the moving stories of several men and women affected by this disease. (
Daily Mail
)

Gift Guides
13 Gifts Any Health Nut You Know Will Go, Well, Nuts Over
by Karina Hoshikawa
Dedicated Feature
This Is Why “Wellness Teas” Have Grown So Popular In ...
There are a handful of remedies that seemingly have the power to abate — or at least provide comfort in the face of — nearly any problem at hand. A nic
by Rebecca Deczynski
Healthy Snacks
The Healthy Snacks To Have In Your Pantry For Late-Night Munchies
by Cory Stieg
Diet & Nutrition
The Best Milk Alternatives For A Non-Dairy Swap
by Karina Hoshikawa
Wellness
What To Know About “Immune Boosters” Before Trying Them
by Karina Hoshikawa
Guide To Wine
A Doctor’s Tips On Choosing Healthier Wines
by Karina Hoshikawa
Pets
Everything To Know About Those Pet CBD Products
*Jerry Seinfeld voice* What’s the deal with CBD for pets? Sure, you yourself might dabble in the wellness supplement every now and again, but what ab
by Karina Hoshikawa
Wellness
8 Eco-Friendly Water Bottles To Help You Stay Hydrated
by Karina Hoshikawa
Diet & Nutrition
Should You Get An Online Nutritionist?
Seeing medical professionals through your phone has gone from being a futuristic fantasy to kind of the norm. If you haven’t had a virtual visit to f
by Elizabeth Gulino
Healthy Lifestyle Tips
7 Foods To Eat When You Really Can’t Afford To Get Sick
by Elizabeth Gulino
Wellness
Why You Wake Up Sweaty After Drinking
So you went a little too hard last night, and now you’re waking up to the sweet smell of a hangover. Surprisingly, there’s something even worse
by Molly Longman
Body
Does The Keto Diet Really Make You Smell?
Even though it was named one of the worst health trends of 2019, the keto diet is still (somehow) going strong. The low-carb, high-fat, high-protein eating
by Elizabeth Gulino
Discover
R29 Stories & News
Watch
R29 Original Series & Films
Shop
R29's Most Wanted