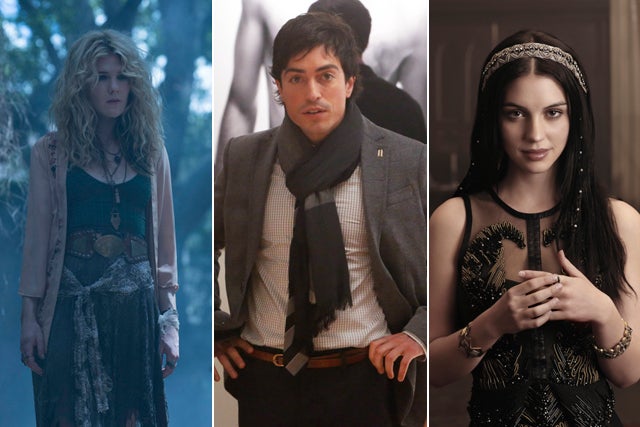 Hump: I assume we’re all going as Lily Rabe dressed like the love child of Ke$ha and Stevie Nicks from
American Horror Story
for Halloween, right? Every time she appeared on the screen, it was like Free People finally made its fall catalog theme “Enigmatic Bayou Witch Does the Walk of Shame at Woodstock,” and it was perfection. Plus, her character has a great couple’s costume option of drawing some stitches and a pentagram directly onto your dude’s torso so he can be your poorly Frankensteined Evan Peters Build-a-Boyfriend. It’s so economical: All he needs are some pants and well-rehearsed psychotic grunts. Really, AHS: Coven is like the gift that keeps on giving when it comes to easy Halloween costumes that are already in your closet and makeup collection.

Advertisement
Marry: Hi, Ben Feldman playing the man of my dreams** on The Mindy Project, acoustic mandolin version of pop songs and all. I’d have preferred Miley or Haim over that particular Katy Perry jam, but hey, it’s not every day a charming man pulls a mea culpa with a miniature stringed instrument on your doorstep. And, if this does happen to you every day, please contact me. I want to know all of your secrets.
**Well, minus a few million awesome points for his character’s negative review of Breaking Bad that Mindy Kaling posted on Instagram. However, it does show that he’s willing to take a stand and express an opinion contrary to that of the general public and/or cultural elite, which I admire. It just happens to be a wrong opinion when it comes to Breaking Bad. You’ll get ‘em next time, one-appearance fictional character I’ve built up way too much in my head.
Kill: Here’s a list of things I Googled (and wondered) while watching Reign, The CW’s fluffy new historical drama about Mary Stuart during her petulant teenage years at French court.
— Mary, Queen of Scots
— Did they really stay and watch royal couples consummate their marriage in medieval times?
— Is this girl seriously pulling a Marnie (you know, the scene after she meets Booth Jonathan) at the top of a staircase?
— Was anyone named Lola in 16th century England? How about Greer or Kenna?
— Why isn’t Jack & Jill on DVD?
Advertisement
— Does Mary get with this Sebastian guy? He’s not a real person, is he?
— How many times can I listen to the opening strums of The Lumineers’ “Charlie Boy” before going insane?
— Why is coyly slipping off one shoulder of your dress always the signal for “wanton young lady ready to surrender her virtue” in these shows?
— Could ladies in waiting really show this much skin?
— When did Scottish people start wearing tartan?
— This scene where she’s twirling on the dance floor and feathers start falling...oh dear.
— Can we throw Rossif Sutherland’s name into the Christian Grey casting hat? Was Nostradamus really that hot?
— Wasn’t Mary Stuart supposed to be clever?
— Are hair thongs going to make a raging comeback thanks to this show?
— How come the Scottish characters don’t have Scottish accents? Same question for the French ones.
— I’m going to keep watching this and hating myself for it, aren’t I?
Le sigh.
GG Good Game
VR Meditation Has Changed My Life IRL
Right now I’m suspended in the air, high above the ground, as if gripped in an invisible giant’s fist. Strangely I don’t feel scared at all. Leaves d
by Maybelle Morgan
Unbothered
Serena Williams’ Legacy Lives On In Black Girls Like Me
I wasn’t a big sports fan growing up. If someone were to ask me to name five athletes as a kid, my response  would have probably been, “Uhhh, Serena W
by Wisdom Iheanyichukwu
Somos Latinx
Never Have I Ever Star Lee Rodriguez on Portraying Fabiola...
For Afro-Latines, seeing someone on screen who looks like you and also shares your cultural background is still rare. “When there’s not a lot of repres
by Priscilla Rodriguez
Advertisement
Somos Latinx
Cancelling Batgirl Isn’t Just Baffling — It’s A Crus...
When I heard the news in 2021 that Afro-Dominican actor Leslie Grace was cast as Batgirl in the Warner Bros. superhero film of the same name, I was ecstati
by Amanda Alcantara
GG Good Game
Sex In The Metaverse Is Coming — And So Can You
These days, talk of the metaverse is inescapable. We take work meetings and suck up to our bosses in a virtual boardroom, attend couture fashion shows alon
by Katherine Singh
Movies
Jo Koy & Easter Sunday Helped Me Better Understand My Fi...
In case it isn’t clear: Jo Koy really, really loves his mom. The comedian/actor has skyrocketed to fame over the past few years, thanks in large part
by Sara Tan
Movies
The Scariest Part of Bodies, Bodies, Bodies Isn’t the De...
Drunk and high at a rich kid mansion, Bee (Maria Bakalova) tries to make sense of the friends she has just met who have decided to make the most of a hurri
by Claire Hambrick
Unbothered
Brittney Griner Sentenced To 9 Years In Russian Prison For Drug C...
After being detained by Russian police at Sheremetyevo Airport on drug allegations in February, WNBA athlete Brittney Griner has officially been sentenced
by Ineye Komonibo
GG Good Game
Hot Tub Streamer Amouranth Is Using A Bikini To Build An Empire
The idea of people going online to watch NSFW material isn’t anything new. For decades, viewers have been covertly opening incognito tabs on their laptop
by Katherine Singh
Somos Latinx
Melissa Barrera’s Resolve Prepared Her to Survive in the Wilderne...
After wrapping her latest starring role on Netflix’s limited series “Keep Breathing,” Melissa Barrera hasn’t only solidified her spot in Hollywood
by Ashley Garcia Lez...
Somos Latinx
Juliana Joel Made History Playing the First Trans Character on Di...
Even while talking through Zoom with a spotty Internet connection, Juliana Joel’s confidence, charisma, and undeniable charm beams through the screen and
by Olivia Zayas Ryan
Unbothered
Legendary Star Leiomy Maldonado On Ballroom And Boundari...
Imagine a place where you can be anything you want to be and fully embrace who you are — without judgment. For Black folxs and members of the LGBTQ+ comm
by Kourtney Pope
Advertisement
Advertisement
Discover
R29 Stories & News
Watch
R29 Original Series & Films
Shop
R29's Most Wanted