Skip navigation!
Story from Entertainment
With the flurry of news and rumors surrounding the 50 Shades Of Grey movie this week, we almost missed Woody Allen's announcement of his latest project. And, judging by the on-set pictures that just leaked, he's already begun shooting it. In a world where every celebrity move immediately becomes headline news, you've got to love the director's dogged, guerrilla tactics just to preserve a little bit of that mysterious movie magic for his audience.
Previously dubbed Untitled Woody Allen Project 2014, Allen's upcoming movie is titled Magic in the Moonlight, and stars Emma Stone, Colin Firth, Eileen Atkins, and Marcia Gay Harden. The story is set in the South of France and, judging entirely from the one photo we've seen, we have a hunch this is an early 20th century period piece. But, aside from that, not much else is known about the film. If it's anything like Blue Jasmine, Vicky Cristina Barcelona, or Midnight In Paris, we already love it. Plus, Stone looks pretty adorable in that little floral hat. (The Guardian) 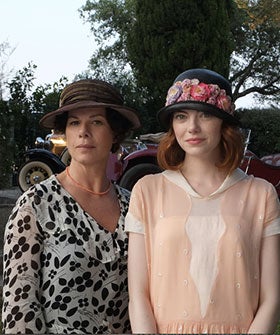 Photo: Via The Guardian.
Advertisement
Celebrity Couples
Justin Bieber Says He Was “Reckless” In His Relationship With Sel...
Justin Bieber just released his first album since 2015. To mark the occasion, he recently opened up to Apple Music’s Zane Lowe about making music again,
by Alexis Reliford
Music
Adele Had The Time Of Her Life Singing At Her BFF’s Wedding
It has been four years since her last album, 25, but don’t worry: Adele just reminded everyone she isn’t going anywhere. On Saturday night, she gave a
by Lydia Wang
Music
BTS Made A Major Album Announcement — & Revealed A Surprise Guest
The Korean megaband BTS have announced the tracklist for their soon-to-be released album, Map of the Soul: 7, complete with a new, high-profile collaborati
by Sarah Midkiff
Pop Culture
Kate Middleton Opens Up About Mom Guilt & Introducing Prince Geor...
If you’ve ever wondered what it’s like to be a royal and a parent, you’re in luck. Kate Middleton recently opened up about motherhood in a rare inter
by Alexis Reliford
Pop Culture
Rita Ora, Jameela Jamil & Love Island Stars Pay Tribute ...
On Saturday, former Love Island host Caroline Flack passed away at the age of 40. A lawyer for her family confirmed that she took her own life and was foun
by Lydia Wang
Pop Culture
Caroline Flack’s Boyfriend Shares Emotional Insta Post Foll...
Former Love Island host Caroline Flack’s boyfriend, Lewis Burton, posted an emotional tribute to his late girlfriend on Instagram the day after she died
by Sarah Midkiff
Celebrity Couples
Krystal Nelson & Chris Randone Split Less Than A Year After Marrying
Paradise has officially come to an end for one Bachelor in Paradise couple. Krystal Nielson and Chris Randone, who met and got engaged during season 5 of t
by Alexis Reliford
TV Shows
The Bachelor’s Victoria Fuller Apologizes For “White Liv...
At this point, it’s starting to feel like every contestant on this season of The Bachelor might be the show’s villain — but right now, the frontrunne
by Lydia Wang
Pop Culture
Amanda Bynes Celebrates Valentine’s Day By Announcing Myste...
Another Valentine’s Day has come and gone, and for some couples the day is the perfect time to take the next step in their relationship. Or, you can do a
by Tara Edwards
TV Shows
Peter Weber Says His “Dumb” Bachelor Decisio...
Dating is hard enough on its own, so having to do so in front of millions via cameras on The Bachelor sounds like a recipe for drama of the highest order.
by Tara Edwards
Entertainment
SATC & Hunger Games Actress Lynn Cohen Is Dead At 86
Lynn Cohen, best known for playing Magda on Sex and The City, has died. She was 86. The actress, who also appeared as Mags in The Hunger Games: Catching Fi
by Shannon Carlin
Movies
After Is Back For More & The Teens Have Gone Wild
After is officially back and the teens have gone wild. We repeat: the teens have gone wild. If you don’t believe us, that horny F-bomb in the first 10 se
by Shannon Carlin
Discover
R29 Stories & News
Watch
R29 Original Series & Films
Shop
R29's Most Wanted