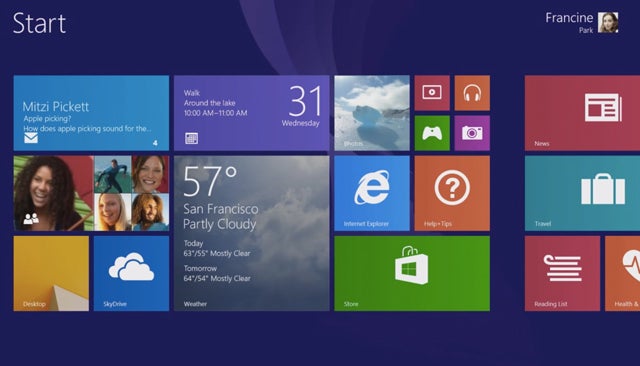 Photo: Courtesy Microsoft.
Today, Microsoft released Windows 8.1, the latest upgrade to its operating system. It's been a long time coming. When Windows 8 was released around this time last year, it introduced dual interfaces: one with a tablet-style series of touchable tiles, and the other the classic desktop mode. Users found the two confusing and frustrating. InformationWeek put it bluntly when it said, "A big flop. Its Frankenstein interface combines two fundamentally incompatible operating systems." Those two interfaces are retained in the update, but Micrsoft did reincorporate its classic Start button, which was lost in the original 8.0 version, along with several new features.
Advertisement
This attempt at dual interfaces, however, might have been doomed from the beginning. "By trying to address both tablets and PCs, Microsoft ended up not serving either particularly well," writes CNET's Shara Tibkin. "If a user didn't have a touch-screen PC, Windows 8 became a confusing mess." She gives Microsoft credit for adding back some missed features, but stops short of praising the update. "[It's] the operating system that Windows 8 should have been."
The New York Times' David Pogue, however, says that the changes to the tablet-style interface "are nearly endless — and terrific." The Photos and Music apps have "matured," he says, while new apps like Food and Drink provide added functionality. He lauds the new Help and Tips apps, too — though one could argue that apps like those should be less neccessary if you're working with an intuitive design.
If you want to read about the whole Windows 8.1 kit and kaboodle, AP's Ryan Nakashima breaks down all of the features here. The update is free for current owners of Windows 8; you'll find it in the Windows Store app. Tomorrow, new computers will come with the operating system preinstalled, and other users can purchase standalone copies of the software. (CNET)
Advertisement
Food News
At Amazon’s New Grocery Store, You Just Grab What You Want ...
Amazon, purveyor of next-day-on-your-doorstep literally anything you can think of with your brain, is making some next-level brick-and-mortar moves. Imagin
by Anabel Pasarow
Tech
The Time Has Come To Find A Way To Watch Season 12 of RuPaul&#...
You’d be forgiven for not knowing where to look for the new season of RuPaul’s Drag Race. Last week we learned that RuPaul’s Drag Race All Stars is l
by Michelle Santiago...
2020 Election
How To Watch Tonight’s Democratic Debate
After last week’s Nevada caucuses, seven qualifying Democratic candidates will take the stage tonight in Charleston, SC, for the last debate before t
by Anabel Pasarow
Tech
The Best Memes Of 2020 So Far
by Michelle Santiago...
Tech
Could Harry & Meghan Make Their Living As Instagram Influencers?
Since officially announcing that they would be stepping down, Prince Harry and Meghan Markle’s future outside of Britain’s royal family has been a topi
by Asia Ewart
Gadget Guide
Netflix’s Top 10 Feature Is The New Myspace Top 8
Were you, like me, obsessed with maintaining a carefully curated MySpace Top 8 list throughout the mid-2000s? While the top lists that once perpetuated mid
by Anabel Pasarow
Tech
How To Watch The Kobe & Gianna Bryant Memorial Service
Almost a month after their untimely passing, Kobe and Gianna Bryant’s public memorial service will take place later today in a “celebration of life”
by Michelle Santiago...
Tech
Meet The Founders Of Black Women Talk Tech — Where They’re ...
When Esosa Ighodaro, Lauren Washington, and Regina Gwynn met, they were navigating the challenges of growing and scaling their own businesses, on top of th
by Anabel Pasarow
Tech
Why Your New Music Friday Playlist Looks Different Today
Fridays on Spotify are about to get a whole lot more fun with the arrival of the new-and-improved (not to mention, very sexily branded — we see you, The
by Anabel Pasarow
Living
The Dangerous Skull Breaker Challenge Isn’t Actually Going ...
The cycle of viral memes and challenges is endless. While most are funny and harmless, some come along that are actually quite dangerous. The latest viral
by Sarah Midkiff
Gadget Guide
The Best AirPod Accessories On The Internet
by Anabel Pasarow
Instagram
A Guide To All Those IG Story Filters You’ve Been Seeing Ev...
by Anabel Pasarow
Discover
R29 Stories & News
Watch
R29 Original Series & Films
Shop
R29's Most Wanted