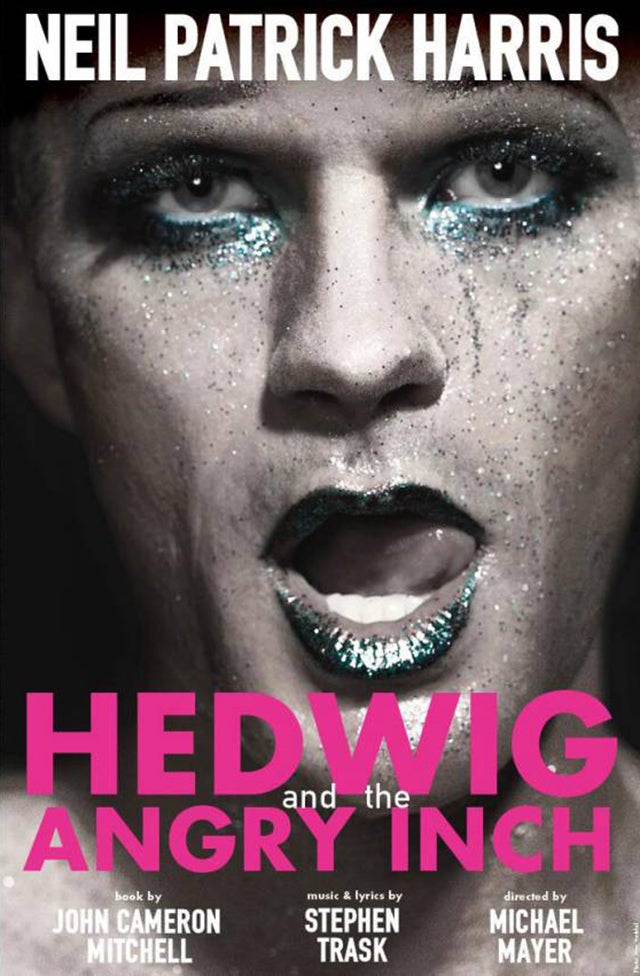 Photo: via @ActuallyNPH.
All things that glitter aren't gold. Sometimes, they're sexually suggestive with running mascara. Example A: Neil Patrick Harris as Hedwig, the German transgendered singer with one inch of flesh left over from a botched reassignment surgery.
A glittery NPH stares back at us from the first poster of the 2014 Broadway revival of John Cameron Mitchell's Hedwig and the Angry Inch. The story follows the life of Hedwig, who, after moving from Germany to Kansas, forms a rock band of outsiders and pursues her Platonic half. There's love, there's loss, and plenty of glittery drama to occupy vodka-cran infused conversations at a drag show for weeks. No doubt NPH will do Mitchell's cult character justice (even with his tongue wagging about like Miley's).
Tickets go on sale "soon," according to Harris' Twitter. The legend, however, is already alive and well.
Advertisement
Celebrity Couples
Did Vanessa Hudgens Just Make It Insta Official With An L.A. Laker?
Vanessa Hudgens might have a new romance on the horizon for 2020.  After making headlines for her breakup with Austin Butler earlier this month —&nb
by Alejandra Salazar
TV Shows
SNL Is As Obsessed With Cheer As You…But ...
Once again, Saturday Night Live knows exactly what you’ve been binging: Netflix’s Cheer, the breakout docu-drama following a team of Texas cheerleaders
by Lydia Wang
TV Shows
SNL’s Melissa Villaseñor Roasted The Oscars For Rewarding ...
Like many others, Saturday Night Live’s Melissa Villaseñor wasn’t all that impressed with this year’s Oscar nominees. So in this week’s episode, s
by Shannon Carlin
Grammy Awards
Get Excited: BTS Are Going To Rock The 2020 Grammys
They might not have received any nominations this year, but BTS will still be at the 2020 Grammys, making themselves known to even more potential fans. It
by Lia Beck
Pop Culture
Demi Lovato’s Dating Life Isn’t The Biggest Story Of ...
It’s awards season, which gives fans the chance to see all of Hollywood’s finest dressed to the nines and strutting their stuff on the red carpet. But
by Kelly Schremph
Pop Culture
Ariana Grande Already Told You Who She’s Dating — Several T...
It’s been over a year since Ariana Grande dropped her smash single “Thank U, Next” and technically we are not any closer to finding out who is next i
by Rachel Paige
Pop Culture
Selena Gomez Has A Few Reasons To Show Up At The 2020 Grammys
Many performers for this year’s Grammys have already been announced, but fans of a certain singer are still hoping for a late addition. Selena Gomez
by Lia Beck
Music
From Ariana Grande To Lizzo, Here’s Everyone Performing At The 20...
by Tara Edwards
Ellen Degeneres
Selena Gomez Stanning Jennifer Aniston Is The Purest Fandom
In this house, we stan Rachel from Friends, we stan Selena Gomez, and now we can also stan Gomez stanning Jennifer Aniston’s impact as Rachel from Friend
by Tara Edwards
Music
Stay Warm All Winter With This Playlist Of New Music
by Courtney E. Smith
Music
Lil Nas X & “Old Town Road” Dominated The Grammy Noms...
by Alexis Reliford
Entertainment
Prince Harry & Meghan Markle’s Bid To Trademark Sussex Royal Is B...
No one thought Harry and Meghan’s transition from the duties of royal life would be easy, but it turns out there are a lot of steps and hurdles along the
by Sarah Midkiff
Discover
R29 Stories & News
Watch
R29 Original Series & Films
Shop
R29's Most Wanted