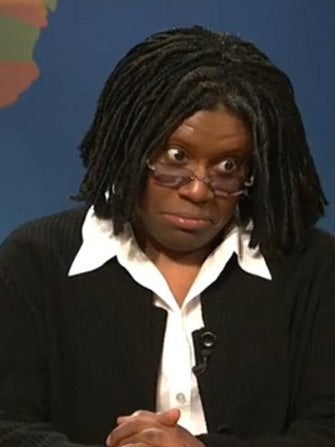 Photo: Courtesy of NBC.
Phew, you guys! Turns out what we thought was a dearth of diversity on television these days is actually just a totally normal, accurate reflection of talent in the real world, to put it in Kenan Thompson's words. Long-time SNL regular Kenan Thompson told TV Guide that the lack of black, female performers on the show is due to the lack of black, female performers in the world: "It's just a tough part of the business...Like in auditions, they just never find ones that are ready." And, while Thompson himself isn't the arbiter of who gets a coveted audition for the show, it's pretty flabbergasting that anyone could actually take this defense of a show that has only cast four black women in its entire history. Maybe Thompson has internalized this philosophy from years of hearing it parroted by producers every time auditions roll around? Needless to say, his comments — whatever the motivation — have left the good people of the Internet quite puzzled:
Advertisement

Kenan Thompson doesn't think I exist which is so odd because I could have sworn I existed this morning...

Although others remain unfazed and un-fussed:

But comedians & actors of color are creating their own opportunities, so they no longer have to rely on mainstream media's limited scope

Others still rose to the occasion with casting suggestions for Lorne Michaels — The Hairpin in particular has some good ideas, and we're sure our commenters will be more than up to the task. SNL has every right to maintain a certain standard of quality, but it's both dubious and unrealistic to suggest that recent years of auditions haven't yielded a black woman who could cut it (and yet they seem to have no trouble coming across white men who fit the bill). As Jezebel points out, SNL deals in pop culture references, and that repertory should by default include famous black women. Producers seem to be of the opinion that having white people impersonate people of other races (with a few notable exceptions) is often viewed as distasteful and inappropriate by audiences. Whether or not you agree with that as an opinion, the truth is that it's a type of controversy most shows would prefer to avoid entirely. The result is that black women are either just ignored as a subject matter or simply portrayed by Thompson himself.
This isn't about tokenism or filling a quota; it's not even about dictating how black women should be portrayed in comedy, or the fact that black comedians are often shuffled into a pretty discriminatory box on network TV. What we have here is simply a logical flaw. SNL clearly doesn't want people of one race being portrayed by people of another. SNL clearly wants to build jokes around impressions of famous people with wide name recognition. Therefore, SNL is willingly opting out of a hugely profitable and potentially hilarious stock of material by not hiring black women. The show's producers and casting directors would do well for themselves to find acceptably awesome black comedians to fill those roles. If they're honestly trying and still haven't found a single candidate in auditions, well, someone in the casting department just isn't doing their job.
SNL has done some great stuff to debunk the old stereotypes that women can't be funny; Tina Fey and Kristen Wiig have pretty much put that argument to bed. Why can't they make the same strides with regards to race? Black, female comedians do exist, and they are working and becoming famous and having great success. Beyond just fielding the Michelle Obama impressions in a P.C. way, a more diverse cast (and not just black women but performers from a variety of backgrounds) might be just what SNL needs to get out of a rut. (TV Guide via Jezebel)
Unbothered
Russian Court Denies Brittney Griner’s Appeal, Upholds 9-Ye...
UPDATE: On Tuesday (Oct 25), a Russian court rejected WNBA star Brittney Griner’s appeal of her nine-year prison sentence for drug charges. After the
by Ineye Komonibo
Unbothered
Say Goodbye To Macy Gray — She Outed Herself As A TERF
On July 4, a day when selective freedom was celebrated in America, it was only fitting that Macy Gray chose to go on known bigot Piers Morgan’s show Unce
by Wisdom Iheanyichukwu
Unbothered
White Supremacy Is To Blame For The Buffalo Massacre. That’s It.
A clip of CNN reporter Victor Blackwell breaking down in tears live on air while talking about last weekend’s horrific massacre of 10 Black people in a B
by Kathleen Newman-B...
Advertisement
Unbothered
Megan Thee Stallion’s Bombshell New Interview Reveals Devastating...
In July 2020, Megan thee Stallion was involved in an intense police stop after attending a celebrity pool party in Los Angeles, leading to the shocking rev
by Ineye Komonibo
Unbothered
Ari Lennox Shares An Update After Her Amsterdam Arrest
Updated December 2, 2019: Days after being detained at Schiphol Airport in the Netherlands, Ari Lennox has resurfaced on social media to give worried frien
by Ineye Komonibo
Unbothered
Two Men Convicted For The 1965 Assassination Of Malcolm X Have Be...
Nearly 60 years after the shocking assassination of civil rights leader Malcolm X, a new development in the investigation into his murder has led to t
by Ineye Komonibo
Unbothered
The Zombification of Whitney Houston
In Haitian mythology, the idea of what we now call zombies emerged from enslaved Africans’ deepest fear: not even death would bring freedom. Though suici
by Brooke Obie
Unbothered
Actually, Netflix, Content Like Dave Chappelle’s Transphobic Come...
Update: Netflix has fired the employee who was organizing an upcoming walkout (set to happen Wednesday, October 20) of trans staffers and allies in protest
by Kathleen Newman-B...
Unbothered
Years After Her Death, The Science Community Is Still Treating He...
In the 1950s, a Black woman named Henrietta Lacks walked into Johns Hopkins Hospital to be treated for cervical cancer, and her cells would go on to b
by Ineye Komonibo
Somos Libres
Why Black Puerto Rican Women Are Leading an Anti-Racist Media Ren...
While the 2020 Census was essential to many communities across the United States, it held a different meaning for Puerto Ricans. Battered after a decades-l
by Frances Solá-Sant...
Unbothered
R. Kelly Facing Life In Prison After Being Found Guilty Of Racket...
This story contains discussion of sexual violence. Please proceed with care. Updated September 27, 2021: Months after being charged and indicted for nine g
by Ineye Komonibo
Unbothered
Jennifer Hough’s First On-Air Interview About Nicki Minaj &...
*Editor’s note: this story contains discussions about sexual violence, threats, and intimidation. Please read with care.  A month after publicly all
by R29 Unbothered
Advertisement
Advertisement
Discover
R29 Stories & News
Watch
R29 Original Series & Films
Shop
R29's Most Wanted