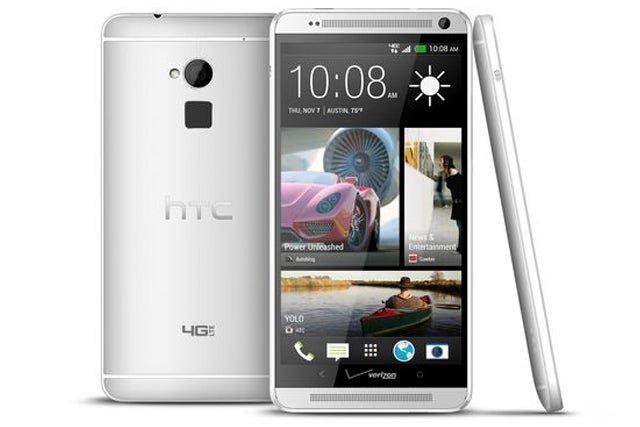 Photo: Courtesy of HTC.
You want one of Apple's snazzy fingerprint scanners but don't want to give into the iOS juggernaut. What's a security-conscious person to do? Well, look no further than HTC. The company announced today the arrival of its HTC One Max, a "phablet" (phone meets tablet) that includes, among other features, a fingerprint scanner on the back of the device. As with the iPhone 5S, you can use it to lock or unlock your screen, in addition to designating up to three different fingers to launch various apps. Unlike the iPhone, however, the Max's scanner cannot be used to authenticate purchases.
The HTC One Max's sizable 1080p display measures 5.9 inches, even larger than the recently released Samsung Galaxy Note 3. Inside, the max has 32 GB of memory, which can be expanded with external storage via the microSD slot hidden behind the removable back cover. It also comes with 50GB of free Google Drive online storage. As for its brains, the Max runs on a 1.7 GHz quad-core Qualcomm Snapdragon processor and 2 GB of RAM. Its camera is the same Ultrapixel camera as the HTC One.
But how usable is it? Joanna Stern at ABC News says that the scanner is awkwardly placed and requires a little more dexterity: "[Unlike] Apple's TouchID in the home button that just requires a basic tap, you have to swipe your finger quite slow for it to log you in." Therein lies the irony, though: Stern notes that HTC thinks of the sensor as more of a convenience feature than a security one. Womp-womp. (USA Today)
Advertisement
Living
Dolly Parton Started A Viral Meme Challenge — Here Are Our Favorites
by Olivia Harrison
Instagram
Instagram Removed The IGTV Button Because No One Used It
Apparently we weren’t clicking on the IGTV button in the upper right-hand corner of our Instagram feeds enough, because now the button ceases to exis
by Anabel Pasarow
Instagram
A Guide To All Those IG Story Filters You’ve Been Seeing Ev...
by Anabel Pasarow
2020 Election
How To Watch Tonight’s Democratic Debate
With just three weeks until the Iowa caucus, the six qualifying Democratic candidates will take the stage tonight at Drake University in Des Moines, IA, fo
by Anabel Pasarow
Tech
12 Of Refinery29’s Favorite Gadgets At CES
by Anabel Pasarow
Gadget Guide
Robots, Vibrators, & Skincare, Oh My: The Top Tech Trends We Saw ...
by Anabel Pasarow
iPhone
The Cutest Eco-Friendly iPhone Cases
by Anabel Pasarow
Tech
Facebook Just Banned “Deepfake” Videos, But What Exac...
Ahead of the 2020 presidential election, Facebook announced an updated policy to remove videos modified by artificial intelligence known as “deepfakes.?
by Sarah Midkiff
The Bachelor
Attention, Bachelor Nation — Here’s How To Stream Tonight&#...
Tonight, Peter Weber commences his journey as The Bachelor, an odyssey on which he will date 30 women (among them: many flight attendants and possibly
by Anabel Pasarow
Relationships
How Stalkerware Technology Made It Easy For My Abusive Ex To Spy ...
Lianne thought that her relationship was perfect. She had met her partner in a London club, and he had quickly moved her and her two daughters into his hom
by Katie Bishop
Golden Globe Awards
How To Tune In To The Golden Globes Tonight
Tonight, January 5, the best of Hollywood will descend on the Beverly Hilton in Beverly Hills, CA, for an evening of vegan food (seriously, 100% plant-base
by Anabel Pasarow
Tech
If You’ve Resolved To Be More Organized In 2020, These Are ...
by Sarah Midkiff
Discover
R29 Stories & News
Watch
R29 Original Series & Films
Shop
R29's Most Wanted