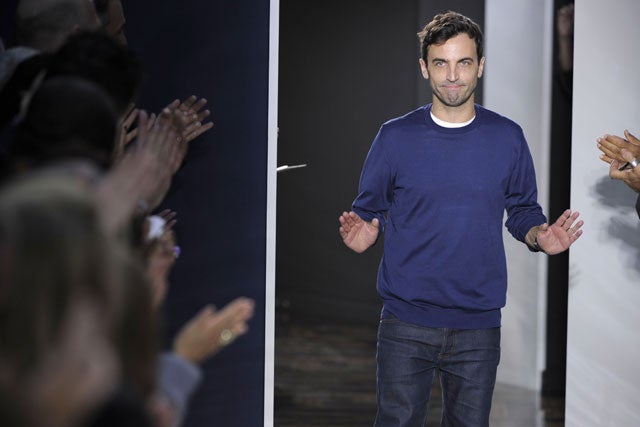 Photo: REX USA/Rex
UPDATE: WWD reports today that LVMH is currently saying that "nothing has been decided" regarding a new hire to replace Marc Jacobs at Louis Vuitton. Nicolas Ghesquière still seems like the most reliable rumor, for the moment. Stay tuned for further updates — the company might not be ready to make an official announcement yet, but it's only a matter of time.
Originally published on October 10: The saga of Nicolas Ghesquière continues, and today the designer has a pretty big, and fairly exciting, announcement. After Marc Jacobs stepped down from his years-long tenure at Louis Vuitton, rumors immediately started about the former Balenciaga creative director taking over Jacobs' place. Ghesquière's next move post-Balenciaga has been a source of much speculation, since the designer has been relatively tight-lipped. The now pretty-surely confirmed move was just briefly denied to NY Mag. Though, the move to Louis Vuitton makes a tremendous amount of sense, allowing Ghesquière to tap into his rock-and-roll nature without leaving the realm of luxury. Also, during his time at Balenciaga, Ghesquière helped jumpstart the house's excellent accessories — a trait that'll serve him well in the legacy that Marc built.
This fit couldn't be better, especially because Ghesquière's presence has sorely been missed in the last few seasons in Paris. The move puts him right back in the spotlight, where a talent of his calibre certainly belongs. We've reached out to LVMH for a comment and are still waiting on a response. (NYMag)
News
Here’s The Real, Really Stupid Reason Michael Cohen Was Sen...
At the start of the coronavirus pandemic, Michael Cohen, Donald Trump’s former personal attorney, received a rare get-out-of-jail card and was granted pe
by Elly Belle
News
Does Trump’s Twitter Threat To Defund Schools Actually Mean...
On Friday, President Donald Trump sent a pair of tweets accusing a nondescript number of “universities and school systems” of being “about Ra
by Sarah Midkiff
News
As Millions Suffer From Unemployment, The Catholic Church Gets $1...
The U.S. Roman Catholic Church successfully lobbied government officials to make an exception from federal rules to include the church in the Paycheck Prot
by Sarah Midkiff
News
Is The Trump Tower Black Lives Matter Mural Meaningful — Or Just ...
Even before the 2016 election, New York City’s Trump Tower has been a site of protest, with people gathering on Fifth Avenue to protest everything from g
by Elly Belle
News
In Trump’s America, It’s No Surprise That The Supreme...
On its last decision day of 2020, the Supreme Court has delivered a 7-2 decision in favor of allowing subpoenas for President Donald Trump’s tax returns
by Elly Belle
News
116 Lawmakers Are Demanding An Immediate Reversal Of Trump’...
Almost three years ago to the day in July 2017, President Donald Trump tweeted that “the United States Government will not accept or allow transgender in
by Elly Belle
News
Debra Messing Used Stacey Abrams To Attack Nina Turner — & It Bac...
Kanye West’s bid for the 2020 presidency has everyone up in arms — including Will & Grace‘s Debra Messing. Messing, a vocal supporter of form
by Sarah Midkiff
News
Harvard & MIT Are Suing The Trump Administration Over ICE’s...
Many American colleges and universities are considering virtual or hybrid education models for the upcoming Fall semester, due to the COVID-19 precautions.
by Lydia Wang
News
Vauhxx Booker Says Five White Men Tried To Lynch Him. Why Didn...
What began as a group of friends gathering at Lake Monroe in Indiana to watch the lunar eclipse over the Fourth of July weekend devolved into an attempted
by Sarah Midkiff
News
SCOTUS Rules To Let Employers Opt Out Of Birth Control Coverage O...
On Wednesday, the Supreme Court voted 7-2 to uphold a Trump Administration ruling that allows employers with religious or moral objections to restrict thei
by Lydia Wang
2020 Election
Can Kanye West Actually Run For President Under The “Birthd...
On the Fourth of July, Kanye West lit up Twitter with an announcement: He is running for president in the 2020 election. Although the rapper has been vocal
by Sarah Midkiff
Donald Trump
Even Donald Trump’s Sister Thinks He’s Too Racist To ...
The much-awaited — and disputed — new book by President Donald Trump’s niece Mary Trump is almost here. Too Much and Never Enough: How My Family
by Elly Belle
Discover
R29 Stories & News
Watch
R29 Original Series & Films
Shop
R29's Most Wanted