Skip navigation!
Story from Tech
Just when you'd returned from camping out for a new iPhone 5S comes the news that Apple will hold an event on October 22, when it will reportedly debut the next generation of iPads. According to AllThingsD, we could see slightly smaller iPads that take design cues from iPad Minis, meaning a thinner and lighter body and a slimmer bezel. The 9.7-inch screen, however, would remain the same size. It'll allegedly run Apple’s new 64-bit A7 chip, just as the second-generation Mini could, though CurrentEditorials reports that it will be the A6 instead. The Mini, at the very least, is expected to get a Retina Display upgrade, according to AllThingsD. The new Mac Pro and OS X Mavericks might get some love at the event, too.
While the date has not been officially confirmed by Apple, several commentators have pointed out that October 22 is also the date of a major Nokia launch and marks the arrival of Microsoft's Surface 2 on retail shelves. The plot thickens. (AllThingsD) 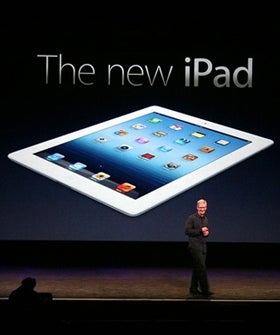 Photo: Via Cult of Mac.
Tech
Clubhouse Conspiracy: How The Popular App Became A Haven For Anti...
Julien Christian Lutz spends much of his day on Clubhouse, an invite-only audio app that has swiftly garnered widespread attention since its launch last ye
by Sarah Midkiff
Tech
The “Best” Memes Of 2021, So Far
by Michelle Santiago...
Living
Everything You Need To Know About Twitter’s New “Supe...
It’s been a difficult time to safely see friends and family, but there are more ways than ever to communicate and keep up with people online. For ins
by Lydia Wang
TikTok
These Cute & Tiny Toys Have Taken Over TikTok. The Reason Why Is ...
Toys — whether store-bought or home-made — colored our childhoods; we woke up to them in the morning, shampooed them in the bathtub, brushed their hair
by Michelle Santiago...
Gen Z
The Only Thing Worse Than The Laugh-Cry Emoji Is Worrying About T...
It’s a startling scene: Very online millennials, known for being loud, proud and often viciously gatekeeper-y about internet culture, are now invested in
by Michelle Santiago...
Tech
The Real Super Bowl Winner Are These Memes Of The Weeknd’s ...
Last night, some very important football happened. I know that because I tuned in (!), but only to watch (partially in disgust and partially in amusement)
by Olivia Harrison
Books & Art
Lauren Oyler Doesn’t Think You’re Dumb
A couple of years ago, because I write about books, I was asked to fill out a questionnaire for a literary website, and one of the questions I was asked wa
by Kristin Iversen
TikTok
The Accidental Sex Couch Tearing Facebook Mom Groups Apart
Social media runs on conflict. Rarely is something ever trending on Twitter because it’s neutrally beloved by everyone. Instead, social media is a vast h
by Michelle Santiago...
Most Wanted
These 15 Laptop Cases & Sleeves Are The Cutest On The Internet
by Anabel Pasarow
Tech
Why Do Celebrities Put Emojis Over Their Kids’ Faces? It...
If you — like me — are obsessed with celebrity culture, and therefore follow a lot of famous people on Instagram, your feed on any given day might incl
by Olivia Harrison
Living
After Instagram Rewrote Its Rules, Sex Workers Had To Get Creativ...
On December 20, 2020, Instagram updated its Terms of Use and the sex work community on OnlyFans was not happy. The new Terms of Use wasn’t a drastic
by Hannah Rimm
Living
Today Was The Day Bernie Sanders Became President — Of Memes
Things certainly feel momentous today. After four long and grueling years of having Donald Trump as president, so many Americans can’t help but feel like
by Michelle Santiago...
Discover
R29 Stories & News
Watch
R29 Original Series & Films
Shop
R29's Most Wanted