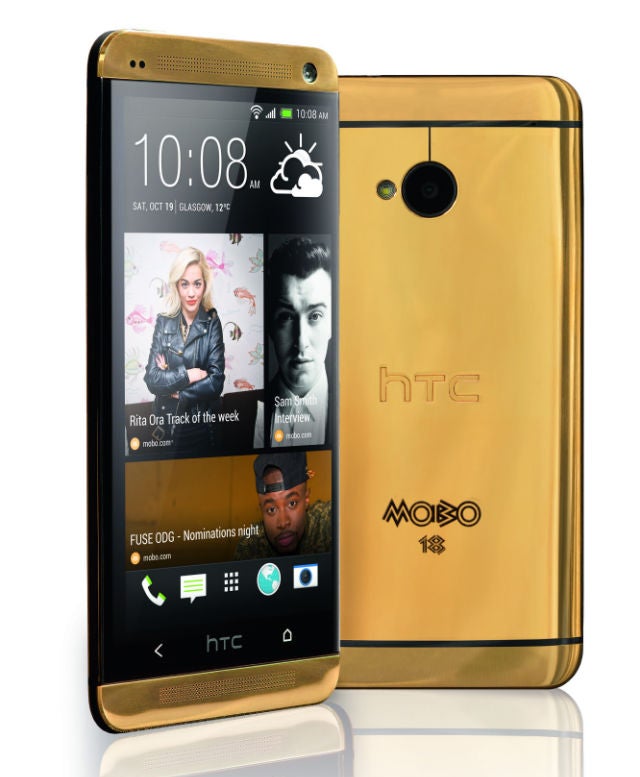 Photo: Courtesy HTC.
File this under "You Can't Take It With You, So Why The Hell Not?" HTC has announced that it will produce a limited edition version of its HTC One smartphone in gold. And we're not talking about the fake gold luster that gilds Apple's completely backordered iPhone 5S. This here's real 18-carat gold, with a real gold price tag of £2,750 (about $4,400). HTC is only producing five of them in commemoration of the MOBO awards, which honors the UK's black artists and urban music. It is, according to HTC, the company's "most exclusive and expensive smartphone."
There's no word on how you can get your gold-digging mitts on one of these yourself. The Best Newcomer Award winner at MOBO, however, will take one home as well as a trophy.
That a company decided to commemorate contemporary black musicians with bling is, perhaps, a little problematic. Then again, gold is on the uptick in rap lyrics. (Engadget)
Tech
Facebook & Twitter Are Finally Banning Trump — Now That He’...
Update: Twitter officially announced Friday evening that President Donald Trump’s account has been permanently suspended. “After close review
by Olivia Harrison
Tech
The Insurrection Will Be Memed — & Maybe That’s Not A Bad Thing
We’re used to thinking of the internet as neutral territory — a virtual town square where everyone gathers together to process things collectively. It?
by Michelle Santiago...
Tech
Find & Support Black-Owned Businesses With These Apps & Websites
by Olivia Harrison
Tech
The Best (& Most Important) Memes Of 2020
by Michelle Santiago...
Gift Guides
7 iPhone Accessories To Give Your Most Tech-Savvy Friend
by Hannah Rimm
Most Wanted
These Are The Cutest (Functional) Cases For Your AirPods
by Anabel Pasarow
Tech
Inject It Into My Veins: Why I’m Obsessed With Watching Nur...
This year has brought with it a lot of amazing internet content — a good thing considering most of us have had to live our lives entirely online. In 2020
by Olivia Harrison
Gift Guides
9 Gift Cards To Make You Feel Close Even From Six Feet Apart
by Hannah Rimm
Tech
The Secret Shame Of Spotify Wrapped
Once again we have arrived at my least favorite time of year. No, I’m not referring to holiday shopping season or even the fact that the sun now sets
by Olivia Harrison
Cyber Monday
Apple Deals On Everything From AirPods To iPads & MacBooks
by Alexandra Polk
Cyber Monday
AirPods, Robot Vacuums, & More Cyber Monday Tech Deals Have Arrived
by Cortne Bonilla
Apple Products
Apple AirPods Are Now The Cheapest We’ve Ever Seen Them
Investing in Apple products is something we tend to do without a second thought anymore. Don’t mind the iPhone 12’s starting $799 price tag. It
by Ray Lowe
Discover
R29 Stories & News
Watch
R29 Original Series & Films
Shop
R29's Most Wanted