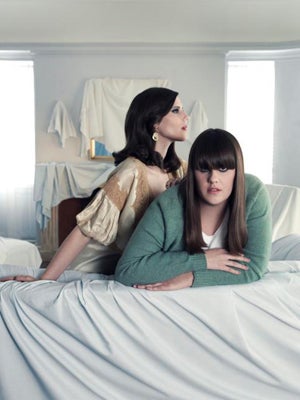 Photo: Via Facebook/Rodarte
Sometimes, when glimpsing a Rodarte runway show and catching the wordly, fine-art-influenced designs that come down the catwalk, it’s easy to forget sisters Kate and Laura Mulleavy helm from S.F.’s backyard. For a refreshing reminder, T Magazine accompanied the Mulleavys in a homecoming of sorts in Santa Cruz and Aptos. In the former spot, the sisters described their upbringing in the beachside town as uncannily similar to The Lost Boys, the vampiric ’80s flick filmed there, which might help further explain why the two didn’t visit "the city" often. “We didn’t even go to San Francisco, which is boring anyway. It’s so uptight compared to here.” We’ve heard S.F. called many things, but uptight? That’s a new one.
But, the piece isn’t all compare and contrast — when the sisters reach their childhood home they squeal in excitement and go hunting to see if their beloved hometown treasures can still be found. The two are completely enchanted by small details they’ve forgotten about their old nesting ground. You can walk down memory lane with Laura and Kate here, and we’ll be hoping the trip inspires a hometown collection — sans tripped-out, dread-locked models.
Fashion
27 Fashion-Forward Places To Buy A Wedding Dress Online
by Irina Grechko
Designer Collaborations
Emily In Paris Season 3 Features A Dress From Ashley Park&...
If you’ve breezed through Season 3 of Emily in Paris and are now on a quest to find the fashion featured on the show, look no further than the collab
by Irina Grechko
Designers
Banana Republic Is In Its Viral Era — What’s Contributing T...
If you were a young professional in the mid-‘00s, Banana Republic was almost certainly where you went shopping when it came time to buy your first workwe
by Tyler McCall
Advertisement
Best New Fashion Designers
Meet The Designer Behind Julia Fox’s Apocalyptic Brand Of Femininity
Back in September, when designer Elena Velez held her second ever fashion show during New York Fashion Week, Uncut Gems actress-turned-It-girl Julia Fox wa
by Frances Solá-Sant...
Designer Collaborations
Serena Kerrigan Wants You To Buy Her Studs Collaboration “F...
“I’m the Queen of Confidence, and I saved you a seat at my throne.” In the last two years, no creator has preached the message of self-love more
by Irina Grechko
Designer Collaborations
Barbour Reimagined Its Signature Jacket For The #GanniGirl Era
In a style landscape teeming with British-grown talent — from veteran brands like Vivienne Westwood and Alexander McQueen to up-and-comers like Molly God
by Amanda Randone
Fashion
How Good American Became A Go-To Brand For Plus-Size Denim
Over the course of the past week, women have taken to social media to share their stories of strength, perseverance, and identity, from being fat-shamed th
by Gianluca Russo
Fashion
Colombian Designer Kika Vargas Is Building A Better Future Throug...
Long before launching her namesake label, Kika Vargas dreamed of designing clothes that were inspired by and rooted in her Colombian heritage. The Bogotá-
by Frances Solá-Sant...
Fashion
Capsule Closets Are The Future Of Fashion, According To Saint Lau...
Over the past few years, fashion has become a revolving door of trends and “aesthetics” that have relegated personal style to an afterthought. The appr
by Frances Solá-Sant...
Unbothered
This Self-Taught Jewelry Designer Is Redefining Black Luxury
Creating luxury jewelry takes art and craftsmanship. Black-owned brand KHIRY — known for its representational take of Blackness and storytelling within t
by Venesa Coger
Designers
How Amanda Forastieri Is Helping Revive Puerto Rico’s Garment Ind...
Even before launching her namesake brand earlier this year, Puerto Rico-born designer Amanda Forastieri has used fashion as a tool of political and cultura
by Frances Solá-Sant...
Style
Skims’ Sold-Out Swim Collection Is Coming Back — Is It Wort...
When the debut Skims Swim collection launched in March, it didn’t take long for the entire swimwear line to sell out. This was not entirely surprisin
by Irina Grechko
Advertisement
Advertisement
Discover
R29 Stories & News
Watch
R29 Original Series & Films
Shop
R29's Most Wanted