Skip navigation!
Story from Entertainment News
Nothing can take away these blues we have about Sinéad O'Connor. The singer sparked a war of words with Miley Cyrus this week in a series of open letters, which devolved from righteous to paternalistic to more or less unhinged in the course of 48 hours. Last night, however, she appeared on Ireland's The Late Late Show and said that her feud with Cyrus was done. "As far as I'm concerned, it's over. It's not something I really want to talk about," said O'Connor. So, what got her blood up in the first place? "It's about music being murdered. It's not actually about Miley." Oh, dear.
Advertisement
The singer went on: "I feel sorry for the murder of music and rock 'n' roll, which has happened because of the industry. Because of Simon Cowell [and] Louis Walsh," an Irish entertainment manager and judge on Britain's X Factor. "They've murdered music. I stand to say it on behalf of every musician in the world, and they'll agree with me. The industry has taken over so much, the money-making side of it, that the sexualizing of extremely young people making records, and all the worship with money and bling and diamonds, all the Simon Cowell, Louis Walsh — it all amounts to the murder of music and that's what concerns me."
This kind of talk is not unexpected. O'Connor is a woman of passion. She once sang, "I'm not going to change my mind / Just because of what they said / The worm has laid eggs in their hearts / But not in my head." And, yes, many musicians would definitely agree that the big-label system has poisoned popular music. But, can we really blame Simon Cowell? Shouldn't we point to deeper, more systemic causes like, you know, capitalism? That privatizing creative expression through a handful of major corporations, which treat music like an industrial product, necessarily dilutes it? And that the cycle of sexualizing and shaming women is even more deeply ingrained in Western ideology?
Sure, Cowell might be emblematic of that system, but let's get down to brass tacks, call a spade a spade, etc. O'Connor is perhaps the highest profile person of late to call into question the complex soup of capital and consumption that produces Cyrus and her ilk. And whether you agree with her or not, it's an important question well worth discussion. Calling out one or two people in the industry, however, is not productive. (NME) 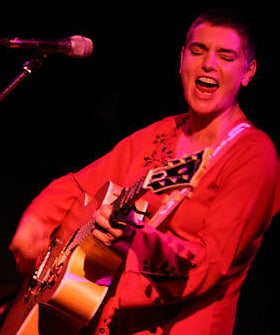 Photo: Via NME.
Unbothered
Ari Lennox Shares An Update After Her Amsterdam Arrest
Updated December 2, 2019: Days after being detained at Schiphol Airport in the Netherlands, Ari Lennox has resurfaced on social media to give worried frien
by Ineye Komonibo
Unbothered
Two Men Convicted For The 1965 Assassination Of Malcolm X Have Be...
Nearly 60 years after the shocking assassination of civil rights leader Malcolm X, a new development in the investigation into his murder has led to t
by Ineye Komonibo
Unbothered
The Zombification of Whitney Houston
In Haitian mythology, the idea of what we now call zombies emerged from enslaved Africans’ deepest fear: not even death would bring freedom. Though suici
by Brooke Obie
Advertisement
Unbothered
Actually, Netflix, Content Like Dave Chappelle’s Transphobic Come...
Update: Netflix has fired the employee who was organizing an upcoming walkout (set to happen Wednesday, October 20) of trans staffers and allies in protest
by Kathleen Newman-B...
Unbothered
Years After Her Death, The Science Community Is Still Treating He...
In the 1950s, a Black woman named Henrietta Lacks walked into Johns Hopkins Hospital to be treated for cervical cancer, and her cells would go on to b
by Ineye Komonibo
Somos Libres
Why Black Puerto Rican Women Are Leading an Anti-Racist Media Ren...
While the 2020 Census was essential to many communities across the United States, it held a different meaning for Puerto Ricans. Battered after a decades-l
by Frances Solá-Sant...
Unbothered
R. Kelly Facing Life In Prison After Being Found Guilty Of Racket...
This story contains discussion of sexual violence. Please proceed with care. Updated September 27, 2021: Months after being charged and indicted for nine g
by Ineye Komonibo
Unbothered
Jennifer Hough’s First On-Air Interview About Nicki Minaj &...
*Editor’s note: this story contains discussions about sexual violence, threats, and intimidation. Please read with care.  A month after publicly all
by R29 Unbothered
Unbothered
CBS Will Now Turn Its Controversial Activist Competition Series I...
Updated September 16, 2021: After a wave of backlash followed the announcement of its controversial new series, CBS is going back to the drawing board to r
by DarkSkyLady
Unbothered
Megan Thee Stallion Wins Two Big Legal Victories — Against Her La...
Megan Thee Stallion scored two major legal wins this week, after a judge granted her the go-ahead to release the remix of BTS’ Butter that she is feature
by Tayo Bero
Unbothered
American Idol Alum Syesha Mercado Is Still In The Midst Of...
Singer and American Idol alum Syesha Mercado has regained custody of one of her two young children who were taken from her by authorities in Florida. Merc
by Tayo Bero
Unbothered
The Woman Assaulted By Nicki Minaj’s Husband Is Setting The Recor...
*Editor’s note: this story contains discussions about sexual violence, threats and intimidation.  Jennifer Hough —  who was assaulted by Nicki Minaj?
by Tayo Bero
Advertisement
Advertisement
Discover
R29 Stories & News
Watch
R29 Original Series & Films
Shop
R29's Most Wanted