Skip navigation!
Story from Tech
The Edward Snowden scandal is far from over. One of the latest developments involves Lavabit, the pro-privacy e-mail company that Snowden allegedly used to communicate his leaks of classified information. New court documents published by Wired's Kevin Poulsen show that the federal government demanded that Lavabit turn over encrypted information on its 400,000 users as part of its investigation. While Snowden was not named in the search warrant issued to Lavabit in July, "the offenses under investigation are listed as violations of the Espionage Act and theft of government property — the exact charges that have been filed against NSA whistleblower Snowden in the same Virginia court," writes Poulsen. The feds demanded that Lavabit compromise its own security in order to provide this information. But, Lavabit has not exactly complied.
Advertisement
While most email providers could easily hand over the information requested by the government, Lavabit encrypts all of its email messages with SSL keys known only to its paying customers. The government was not seeking individual messages, but instead only the "to" and "from" lines, along with the IP addresses used to log in to a user's mailbox, which it requested with a "pen register" order — similar to a wiretap order, but with much less evidence necessary. "Because they provide only metadata, pen register orders can be obtained without 'probable cause' that the target has committed a crime," writes Poulsen. Still, Lavabit would have had to essentially defeat its own encryption system and compromise the privacy of all its users in order to comply.
Lavabit wasn't having any of that. Instead, its founder, Ladar Levison, employed every tactic to avoid giving the government this information. When he initially claimed it couldn't be done, he was threatened with criminal contempt by a federal judge. He was then ordered to provide all of the information necessary to decrypt the wanted data. The prosecutor in the case told the court that users shouldn't worry, and that only essential information would be captured. "So there are no agents looking through the 400,000 other bits of information, customers, whatever," he said. But, that's hardly comforting to people who pay for privacy.
When the court sided with the government, Levison decided to play dumb. He provided all of the private SSL keys the following day — on an 11-page printout, in four-point font. The government was not amused, calling the document "illegible."
Advertisement
“To make use of these keys, the FBI would have to manually input all 2,560 characters, and one incorrect keystroke in this laborious process would render the FBI collection system incapable of collecting decrypted data,” prosecutors complained.
Levison did not provide an electronic copy. Instead, he shuttered Lavabit on August 8, because he refused "to become complicit in crimes against the American people," he wrote on the site. But, his role is far from over — he still faces court appeals and is asking for donations to help him fund his case in the 4th Circuit Court of Appeals. If you want to support Lavabit's cause, check it out its campaign here. (Wired) 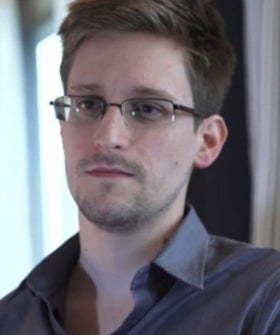 Photo: Via Wired.
Advertisement
Living
Dolly Parton Started A Viral Meme Challenge — Here Are Our Favorites
by Olivia Harrison
Instagram
Instagram Removed The IGTV Button Because No One Used It
Apparently we weren’t clicking on the IGTV button in the upper right-hand corner of our Instagram feeds enough, because now the button ceases to exis
by Anabel Pasarow
Instagram
A Guide To All Those IG Story Filters You’ve Been Seeing Ev...
by Anabel Pasarow
2020 Election
How To Watch Tonight’s Democratic Debate
With just three weeks until the Iowa caucus, the six qualifying Democratic candidates will take the stage tonight at Drake University in Des Moines, IA, fo
by Anabel Pasarow
Tech
12 Of Refinery29’s Favorite Gadgets At CES
by Anabel Pasarow
Gadget Guide
Robots, Vibrators, & Skincare, Oh My: The Top Tech Trends We Saw ...
by Anabel Pasarow
iPhone
The Cutest Eco-Friendly iPhone Cases
by Anabel Pasarow
Tech
Facebook Just Banned “Deepfake” Videos, But What Exac...
Ahead of the 2020 presidential election, Facebook announced an updated policy to remove videos modified by artificial intelligence known as “deepfakes.?
by Sarah Midkiff
The Bachelor
Attention, Bachelor Nation — Here’s How To Stream Tonight&#...
Tonight, Peter Weber commences his journey as The Bachelor, an odyssey on which he will date 30 women (among them: many flight attendants and possibly
by Anabel Pasarow
Relationships
How Stalkerware Technology Made It Easy For My Abusive Ex To Spy ...
Lianne thought that her relationship was perfect. She had met her partner in a London club, and he had quickly moved her and her two daughters into his hom
by Katie Bishop
Golden Globe Awards
How To Tune In To The Golden Globes Tonight
Tonight, January 5, the best of Hollywood will descend on the Beverly Hilton in Beverly Hills, CA, for an evening of vegan food (seriously, 100% plant-base
by Anabel Pasarow
Tech
If You’ve Resolved To Be More Organized In 2020, These Are ...
by Sarah Midkiff
Discover
R29 Stories & News
Watch
R29 Original Series & Films
Shop
R29's Most Wanted