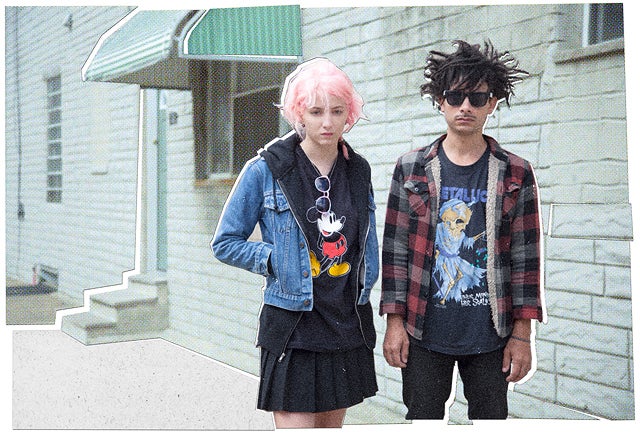 Photo: Courtesy of Aliya Naumoff. Illustrated by Ammiel Mendoza.
The assault of a Hunters live show is a see-it-to-believe-it sort of situation. Colead singers Derek Watson and Isabel Almeida have a dynamic that's both intensely combative and seriously sexy (the two happen to be a couple, which could help explain it). It often seems like Almeida spends as much time writhing on the floor as she does singing into her mic. With a bright-pink shock of tussled hair, it's a vision of pure punk that could burn your retina. We caught up with the front woman after an especially rough week of shows at New York's CMJ festival to talk moving from Brooklyn to Philly, recording the band's self-titled new record, and its raucous stage presence.
Advertisement

Music Marathon
"CMJ was pretty intense. Saturday was the last day — we played three shows in a row, and that was after driving back from Baltimore and sleeping three hours. To be honest, sometimes I feel completely destroyed before a show, but as soon as I'm on stage, hearing the music, I don't feel anything anymore. Then after the show is over I'm like, oh my god, I'm dead. For that last show, we were drinking some vodka and Red Bull, but most of the time, it's just the adrenaline of playing, the audience's energy, and the music. That just gives me energy."

Record Release
"This year we recorded at Electrical Audio in Chicago, but we didn't really have much time. We recorded the whole record in five days. I think it was perfect for this record. Sometimes you can start overthinking things. These songs were ready: We just wanted to get in and get out. We've been playing and touring on these songs for a while now. It's been nice to share it with people, and people who like the record can listen to the songs and come to the shows and know what songs we're playing."

Going All Out
"Two seconds before the show starts, we're just joking around and having a beer. We don't have a ritual. We just go for it!"

Heroes to Hoagies
"Tommy [Martin] and Greg [Giuffre] still live in Brooklyn, and we still go to Brooklyn to practice, but I'm really excited to be in Philly. We moved because we needed more downtime, and also because the rent was so expensive that we were subletting our place when we were on tour. We started getting uncomfortable with having strangers around all our stuff. Vinyls would go missing, and we didn't know if we lost them or people took them. It made more sense to move to Philly. It's way cheaper."

Unbothered
We Created Hollywood’s New Inclusion Rider — Here’s Why It’s Just...
Fanshen Cox and Kalpana Kotagal co-authored the Inclusion Rider. Cox is the head of strategic outreach at Pearl Street Films and co-host of the Webby nomin
by Fanshen Cox
Unbothered
DMX’s Death Has Exposed The Insensitivity That Still Surrounds Su...
Dis providing an opportunity to shift how audiences and the media engage with substance use, mental health, and the complications that arise with celebrity
by Sharine Taylor
Entertainment News
Johnny Depp Loses Appeal In Amber Heard Libel Case Amid Other Law...
Johnny Depp is dealing with another loss in his drawn out battle against the courts and ex-wife Amber Heard, losing his appeal against the UK High Court ju
by Ineye Komonibo
Advertisement
Entertainment
T.I. & Tiny Harris Deny Numerous Disturbing Claims Of Abuse & Rape
This story contains details of sexual violence. Musicians and married couple T.I. (real name Clifford Harris) and Tameka “Tiny” Harris are pote
by Ineye Komonibo
Entertainment News
FKA Twigs Shares Dark Details Of Her Abusive Relationship With Sh...
This story contains details of intimate partner violence. Months after revealing that her former relationship with Shia LaBeouf was allegedly wrought with
by Ineye Komonibo
Entertainment News
Dustin Diamond of Saved By The Bell Fame Is Dead At 44
Dustin Diamond, the actor best known as playing the quirky Screech on beloved ’90s NBC sitcom Saved By The Bell, died on February 1. He was 44. Accor
by Natalie Morin
Entertainment News
Hollywood Icon Cicely Tyson Dead At 96
Cicely Tyson, boundary-breaking and award-winning actress, died on Thursday, January 28, 2021. The beloved film star was 96 years old, and her cause of dea
by Ineye Komonibo
Entertainment
Mossimo Giannulli To Finish His Prison Sentence Behind Bars
Updated January 27, 2021: Despite the lengthy pleas of his legal team, Mossimo Giannulli will be spending the rest of his prison sentence inside of an actu
by Ineye Komonibo
Entertainment News
FKA Twigs’ Lawsuit Against Shia LaBeouf Is Far From His First
Shia LaBeouf is at the center of a new disturbing lawsuit accusing him of domestic abuse towards his ex-girlfriend FKA twigs (real name Tahliah Debrett Bar
by Ineye Komonibo
Entertainment News
FKA Twigs Sues Shia LaBeouf Over Abusive Relationship
Art pop singer FKA twigs (real name Tahliah Debrett Barnett) is breaking her silence about the tumultuous nature of her relationship with Shia LaBeouf, all
by Ineye Komonibo
Entertainment News
Natalie Desselle Reid Of Cinderella & B*A*P*S F...
Natalie Desselle Reid, the comedic actress known for roles in the Brandy-led version of Rodgers & Hammerstein’s Cinderella and UPN sitcom Eve has die
by Natalie Morin
Meghan Markle
We Just Got Two Major Updates About Meghan Markle’s Lawsuit...
New developments in Meghan Markle’s ongoing lawsuit against Mail on Sunday have surfaced, further complicating the Duchess’ previous testimony and impa
by Ineye Komonibo
Advertisement
Advertisement
Discover
R29 Stories & News
Watch
R29 Original Series & Films
Shop
R29's Most Wanted