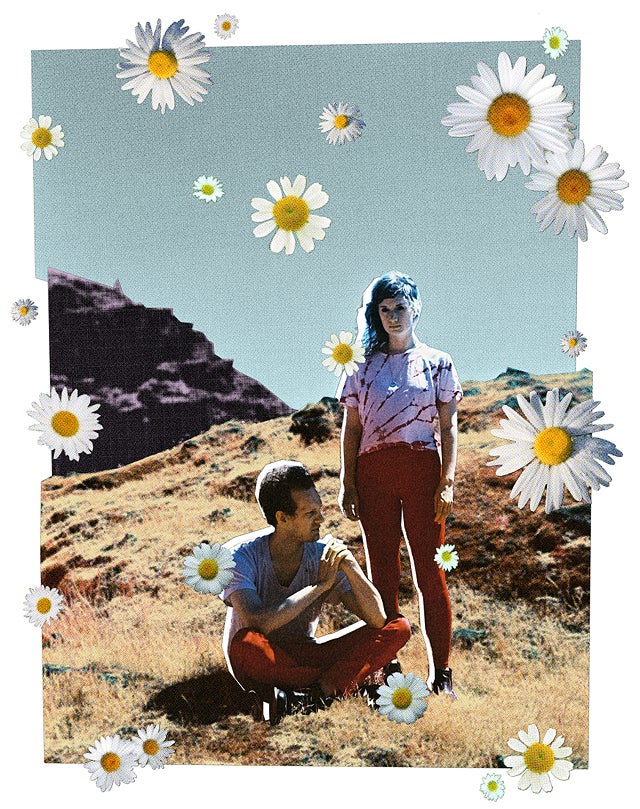 Photo: Courtesy of Pure Bathing Culture. Illustrated by Ammiel Mendoza.
Portland-based duo Pure Bathing Culture makes breathy pop songs that music critics like to describe with words like "gauzy" and "diaphanous." Formed by ex-Vetiver touring members Sarah Versprille and Daniel Hindman, the band relocated from Brooklyn to record its debut, save some money, and enjoy more wide-open space. The result is Moon Tides, a nine-track LP where Versprille's vocals float above Hindman's guitars like a reassuring celestial body. We caught up with the two in their touring van before a show at Williamsburg's Glasslands Gallery to talk moving west, grilling salmon, and striking out on their own.
Portland Calling
Hindman: "We were working on this record and decided we wanted to take Pure Bathing Culture a little bit more seriously. We started talking to the guy who recorded our record, whose name is [singer-songwriter/producer] Richard Swift and also, simultaneously, our lease came up. We were also on the road, touring with [Vetiver], at that point, and we just impulsively decided to move to Portland. Sarah has a cousin who has a house there — that's our landlady. So many things started to make sense. We had a lot more space to write, and we were touring, so we didn't have to work because we were touring and our money would go a lot further. The stars aligned. It's a great city."
Advertisement
Versprille: "We have a lot of friends on the West Coast, and people had been trying to convince us to move for a long time. When it happened, it was kind of impulsive, but I think it had been in our minds for a while."
Working From Home
Versprille: "We have so much space to work. In Greenpoint, we just had a tiny little room that wasn't even as big as this van. In Portland, we have a massive space. We can just get up in the morning and go up there and start working."
Hindman: "Being surrounded by our instruments, our space, and our pictures [inspires us]. It's nice not to share our rehearsal space with other bands."
Solo, Together
Hindman: "It's way different than Vetiver for sure, but there are common strains that run through it. There are some textures on the last Vetiver record, Charm, [that] were carried over to our band a little bit. We're certainly more of a pop band than Vetiver ever was — or aspired to be. It's just a way different songwriting machine. Vetiver is Andy Cabic's songs, and we're writing our own."

Band Camp
Versprille: "We haven't been playing shows that long. We played our first show in early 2012 — which is just not that long ago. We're still figuring out a lot of stuff with the live shows. We just got a regular drummer, when before we were playing to a drum machine. We're just getting to the point where we're seeing people react to the music more so than we have in the past. It'll be cool to see what happens."
Advertisement
Hindman: "Playing live there's more of an urgency to make things punch out a little bit more and be more engaging. I think that'll influence our next record. This record is just the first batch of songs. It's kind of us learning how to be songwriters and learning how to be a band. It's getting out of the bedroom-pop mentality."
What's Cookin'
Versprille: "We had a day off in Encinitas, CA. We got a really nice piece of salmon and cooked it."
Hindman: "We also recently learned how to make chicken adobo, which is a Filipino chicken dish, I'll have you know."
Unbothered
Brittney Griner Sentenced To 9 Years In Russian Prison For Drug C...
After being detained by Russian police at Sheremetyevo Airport on drug allegations in February, WNBA athlete Brittney Griner has officially been sentenced
by Ineye Komonibo
Unbothered
Say Goodbye To Macy Gray — She Outed Herself As A TERF
On July 4, a day when selective freedom was celebrated in America, it was only fitting that Macy Gray chose to go on known bigot Piers Morgan’s show Unce
by Wisdom Iheanyichukwu
Unbothered
White Supremacy Is To Blame For The Buffalo Massacre. That’s It.
A clip of CNN reporter Victor Blackwell breaking down in tears live on air while talking about last weekend’s horrific massacre of 10 Black people in a B
by Kathleen Newman-B...
Advertisement
Unbothered
Megan Thee Stallion’s Bombshell New Interview Reveals Devastating...
In July 2020, Megan thee Stallion was involved in an intense police stop after attending a celebrity pool party in Los Angeles, leading to the shocking rev
by Ineye Komonibo
Unbothered
Ari Lennox Shares An Update After Her Amsterdam Arrest
Updated December 2, 2019: Days after being detained at Schiphol Airport in the Netherlands, Ari Lennox has resurfaced on social media to give worried frien
by Ineye Komonibo
Unbothered
Two Men Convicted For The 1965 Assassination Of Malcolm X Have Be...
Nearly 60 years after the shocking assassination of civil rights leader Malcolm X, a new development in the investigation into his murder has led to t
by Ineye Komonibo
Unbothered
The Zombification of Whitney Houston
In Haitian mythology, the idea of what we now call zombies emerged from enslaved Africans’ deepest fear: not even death would bring freedom. Though suici
by Brooke Obie
Unbothered
Actually, Netflix, Content Like Dave Chappelle’s Transphobic Come...
Update: Netflix has fired the employee who was organizing an upcoming walkout (set to happen Wednesday, October 20) of trans staffers and allies in protest
by Kathleen Newman-B...
Unbothered
Years After Her Death, The Science Community Is Still Treating He...
In the 1950s, a Black woman named Henrietta Lacks walked into Johns Hopkins Hospital to be treated for cervical cancer, and her cells would go on to b
by Ineye Komonibo
Somos Libres
Why Black Puerto Rican Women Are Leading an Anti-Racist Media Ren...
While the 2020 Census was essential to many communities across the United States, it held a different meaning for Puerto Ricans. Battered after a decades-l
by Frances Solá-Sant...
Unbothered
R. Kelly Facing Life In Prison After Being Found Guilty Of Racket...
This story contains discussion of sexual violence. Please proceed with care. Updated September 27, 2021: Months after being charged and indicted for nine g
by Ineye Komonibo
Unbothered
Jennifer Hough’s First On-Air Interview About Nicki Minaj &...
*Editor’s note: this story contains discussions about sexual violence, threats, and intimidation. Please read with care.  A month after publicly all
by R29 Unbothered
Advertisement
Advertisement
Discover
R29 Stories & News
Watch
R29 Original Series & Films
Shop
R29's Most Wanted