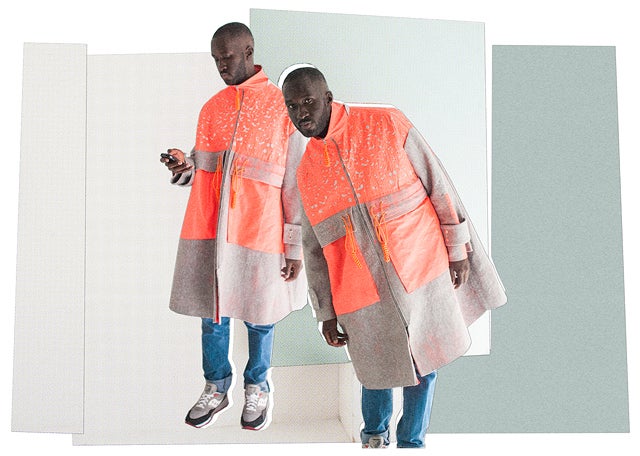 Photo: Courtesy of Kwes. Illustrated by Ammiel Mendoza.
"I just put out what I'm feeling," says London songwriter/producer Kwes. Over the course of his debut album, ilp., Kwes pays tribute to his grandparents, goes rollerblading, and sings about his doubts and dreams. "I haven't attempted to adopt any sort of persona," he explains. "It's something that doesn't really come naturally to me." Talking to Kwes has the same careful poignancy of his music. He's thoughtful — answering each question with a considered, careful deliberation. As we ask about his trip to the Congo, Pusha T sampling his music, and how he makes his cell phone work overtime, Kwes weighs his answers with the same importance. And, when we say how much we enjoyed the record, he's legitimately grateful. "It's the record, I guess, I was supposed to make. I'm just happy it's going to be out there for people to take in."
Advertisement

Getting Creative
"When I'm working with someone else, I only have their interests at heart, and I'm just helping them realize them. It's a bit more regimented, but still, nonetheless, quite free, generally. I guess, with me, I wouldn't say I'm producing myself. The distinction between writing and producing has blurred a lot more when I'm working on my own stuff. It's more like painting, for example, or just gardening. It's just an activity — it's just another creative outlet."

Sampled by Pusha T
"I just found that really entertaining. I wasn't like, 'How could that be done to my song?' I welcomed that. I was aware of where the song could go before my track got sampled. I'm very aware how a sample could end up, or how it could be recontextualized. The Pusha T record is great. It's just really interesting and fun."

Feeling Grateful
"It's something I went to the Congo already knowing, but the point hit home after going there for a week: That, where we are right now — the U.K., the U.S. — we're so privileged. Just looking at the economical and sociological unrest there was heartbreaking. But, seeing the people in the Congo dealing with it and making use of what they have and being grateful for what they have. It was beautiful to see. It just displayed to me the strength of the human heart. It was poignant, but at the same time exciting working with the Congolese musicians out there. I was feeling so many emotions while I was out there. It's made me more grateful for what I have — definitely."

Making It
"When I did my record and publishing deal with Warp two years ago — just before I went to Congo — that was a the first time I saw quite a few zeros at the end of my account. That's purely on the monetary level, but fulfilling my childhood dream of being on a label such as Warp and having the opportunity to make a living from what I was doing. Waking up and not having to worry that I have to get a job now. That this is my job. I'm paying taxes through doing this. So, I guess doing my record deal was a defining moment."

Found Sound
"My phone has been a really good source of inspiration. It was really instrumental regarding this album. There's a lot of my phone in the record. Lots of field recording and vocal takes ended up on the record. I think some of the vocals I did for 'Cablecar' on my phone are on the record."