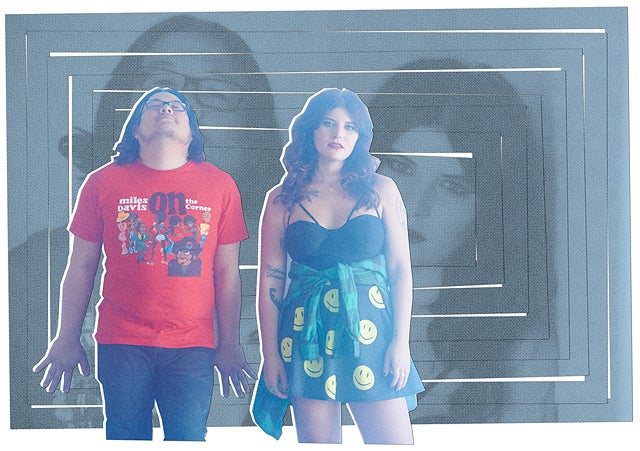 Photo: Courtesy of Best Coast. Illustrated by Ammiel Mendoza.
"I rarely write happy lyrics," admits Best Coast's Bethany Cosentino. That said, she's quick to point out that her new "mini-album," Fade Away, has some of the most upbeat songs she's ever penned. The seven-song record is the first release from Cosentino's own label, Jewel City, whose title is from the nickname of her hometown of Glendale, CA. "There's a bowling alley there called Jewel City Bowl, and I used to have my birthday parties there when I was little," she says. "It was the first name I thought of." We caught up with Cosentino while she was on tour to talk her new album, her continued interest in fashion, and feeling homesick.
Advertisement

Fade Away
"We tried to take Crazy for You and The Only Place and make a baby out of them. Sonically, it's not super-lo-fi, but it's not super-produced like the last record was. We wanted to meet in the middle a little bit. The songs are a little bit more upbeat and pop-y — just a little more happy-sounding than the last record. With this one I was listening to a lot of Blondie and Mazzy Star and My Bloody Valentine, but there is still some Patsy Cline and a lot of '50s and '60s country music that I listen to a lot."

Writing Routine
"I typically only write in my bedroom. I've tried writing on tour and in hotel rooms and backstage and stuff, but I never really feel like I can get my best work out. I tend to wait until I'm home where I take the ideas that I conjure up when I'm traveling and work on those. I don't know what it is about being in my bedroom…I'm just very comfortable, and it's very laid-back. Also, just being in California, where it's typically 80 degrees, and it's sunny and breezy outside, and I'm waking up to sunlight — that really inspires me as well."

On the Road
"I miss my own space and my own stuff. When you're living out of a suitcase, and you're living on a bus and in hotels, it can get lonely and just weird. You're not in your own bed. When I'm on tour, I bring lots of DVDs and books that I can lose myself in. That's pretty much what I do when I'm home: read, watch TV, and go shopping. So, that's what I do when I'm touring, so I can feel a bit more at home. We're actually in a random town right now — we're in Columbia, MO. It's actually kind of fun. It's kind of cool that tour just throws you into cities that you'd never experience otherwise."

Vintage Vixen
"I love clothing and accessories and shoes. My mom is a fashion designer — she does reconstructed vintage stuff — and she was always taking me to vintage stores growing up, so I've always been around that sort of aesthetic. As I got older that became something that I got really into. I haven't been asked to do...any fashion-related projects since my collaboration with Urban Outfitters, but I'd totally be down to do another fashion-related thing. I was just in Cleveland a couple days ago, and I found this really cool antique store. I got some cool vintage costume jewelry and this crocheted crop top."

Broken Record
"It's really awesome to play new music, just because when you're playing the same 15 songs every single night, you're like, 'Oh my god, I have to play "Boyfriend" again!' [laughs]. It's nice to spice things up and throw something new in the mix. We've been having fun playing the new songs and people seem to be liking them."

Entertainment
T.I. & Tiny Harris Deny Numerous Disturbing Claims Of Abuse & Rape
This story contains details of sexual violence. Musicians and married couple T.I. (real name Clifford Harris) and Tameka “Tiny” Harris are pote
by Ineye Komonibo
Entertainment News
FKA Twigs Shares Dark Details Of Her Abusive Relationship With Sh...
This story contains details of intimate partner violence. Months after revealing that her former relationship with Shia LaBeouf was allegedly wrought with
by Ineye Komonibo
Entertainment News
Dustin Diamond of Saved By The Bell Fame Is Dead At 44
Dustin Diamond, the actor best known as playing the quirky Screech on beloved ’90s NBC sitcom Saved By The Bell, died on February 1. He was 44. Accor
by Natalie Morin
Entertainment News
Hollywood Icon Cicely Tyson Dead At 96
Cicely Tyson, boundary-breaking and award-winning actress, died on Thursday, January 28, 2021. The beloved film star was 96 years old, and her cause of dea
by Ineye Komonibo
Entertainment
Mossimo Giannulli To Finish His Prison Sentence Behind Bars
Updated January 27, 2021: Despite the lengthy pleas of his legal team, Mossimo Giannulli will be spending the rest of his prison sentence inside of an actu
by Ineye Komonibo
Entertainment News
FKA Twigs’ Lawsuit Against Shia LaBeouf Is Far From His First
Shia LaBeouf is at the center of a new disturbing lawsuit accusing him of domestic abuse towards his ex-girlfriend FKA twigs (real name Tahliah Debrett Bar
by Ineye Komonibo
Entertainment News
FKA Twigs Sues Shia LaBeouf Over Abusive Relationship
Art pop singer FKA twigs (real name Tahliah Debrett Barnett) is breaking her silence about the tumultuous nature of her relationship with Shia LaBeouf, all
by Ineye Komonibo
Entertainment News
Natalie Desselle Reid Of Cinderella & B*A*P*S F...
Natalie Desselle Reid, the comedic actress known for roles in the Brandy-led version of Rodgers & Hammerstein’s Cinderella and UPN sitcom Eve has die
by Natalie Morin
Meghan Markle
We Just Got Two Major Updates About Meghan Markle’s Lawsuit...
New developments in Meghan Markle’s ongoing lawsuit against Mail on Sunday have surfaced, further complicating the Duchess’ previous testimony and impa
by Ineye Komonibo
Documentary
Cheer‘s Jerry Harris Has Been Arrested & Charged W...
Update Sept. 17, 2020: Jerry Harris of the Emmy-nominated Netflix show Cheer has been arrested and charged with the production of child pornography. Accord
by Natalie Morin
Entertainment News
Migos’ Takeoff Denies Sexual Assault Allegations In New Sta...
Updated August 6, 2020: Takeoff has denied the accusations of rape made against him, calling the allegation “patently and provably false.” In a
by Ineye Komonibo
Pop Culture
Frank Ocean’s Younger Brother Ryan Breaux Killed In Car Acc...
Update August 6, 2020: Ryan Breaux’s mother, Katonya Breaux, publicly mourned the loss of her son on Instagram, after the 18-year-old was killed in a
by Natalie Morin
Discover
R29 Stories & News
Watch
R29 Original Series & Films
Shop
R29's Most Wanted