Skip navigation!
Story from Politics
Rick Owens' explosive spring 2014 show last week really lit a fire underneath the fashion set. The collection was shown on a team of step dancers from the United States, including fashion designer and Refinery29 reader (who's a frequent Caption This! winner, too), Shauntele. We asked Shauntele to debrief us on her participation in a game-changing show, what it was like to meet Carine Roitfeld, and the meaning behind all those scowls. 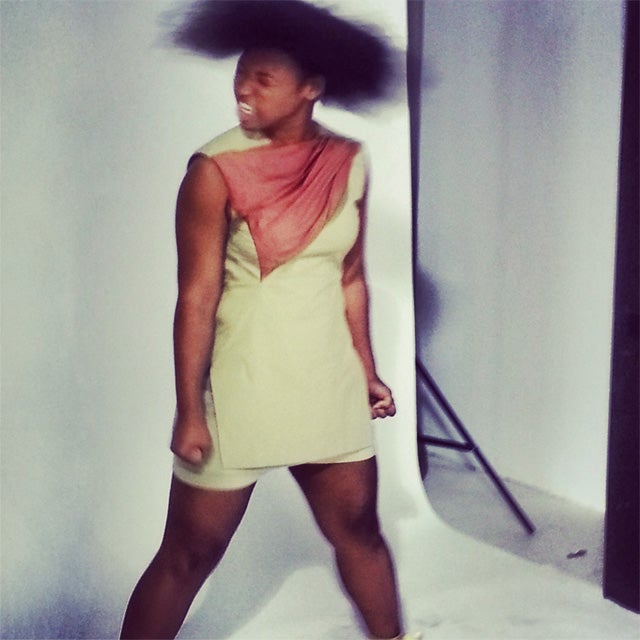 Tell us a little bit about how this all came about!
"In May, Maxine Lyle, the founder of Soul Steps contacted me regarding this opportunity, noting that the designer (which she couldn’t disclose at the time) had found the inspiration by viewing videos of step teams and became intrigued by the intensity of this very American art form. By the end of our second conversation, I had learned the designer would be the man, the myth — Rick Owens — and my bags were packed before I could hang up. I’ve designed my own clothing line, Shauntelé, for four years and been in the fashion industry for eight. I was certainly familiar with Rick Owens, and although he is known for thinking outside of the box, it was still hard to truly believe that a designer would put us on the Paris stage as actual models."

How were all the women cast?
"Rick Owens' Vicious team is comprised of four individual step groups, Soul Steps and Momentum from New York and the Washington Divas and the Zetas who hail from the D.C. area. We were all recruited by LeeAnet Noble and Lauretta Noble who auditioned and interviewed a number of teams. Looking back on the women chosen, I think the selection process was not only about talent but also about drive and sincerity of heart." 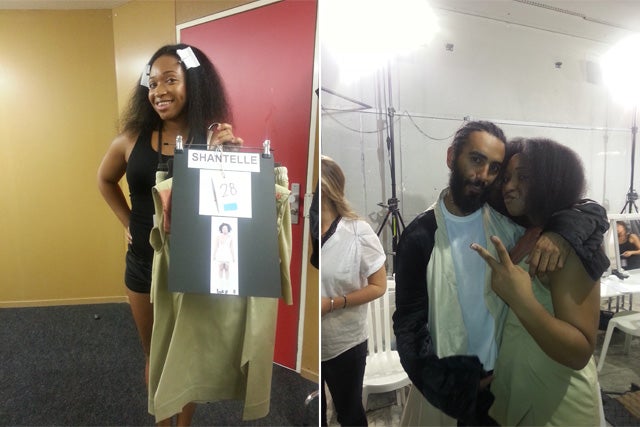 Walk us through the rehearsal process. Who were the masterminds behind the choreography?
"The group rehearsals were normally three to four hours on the weekends with our Souls Steps founder, Maxine, often calling us in earlier to squeeze in extra hours. Each group brought their own routine, which was then merged with the choreography of LeeAnet Noble, who used steps from Zulu traditions and gumboot dancing to give the piece its uniqueness. Asha Mines and Rich Aybar from the Owenscorp also both played a huge part in communicating the vision of fierceness that the performance required and how the clothes would complete the story."

What was the process of choosing which clothes you were going to wear for the show and tailoring it to your body?
"Our first time meeting Rick in person was during our first fitting. He and his team had a series of muslins with the basic shapes and some of the details that would later be incorporated into the final silhouettes. At those moments, we had the foundation, and he was able to build upon it to complete the amazing structures that were debuted in Paris. The most surprising part of the experience was that we were never made to feel anything less than beautiful or adequate because of our body types — even though we clearly exist far outside the fashion-world norms. We didn’t get to keep the outfits from the show, but Rick has gifted us other items from his previous collection, and on our last night in Paris, he chartered a private boat tour along the Seine river where he then presented the team with badass personalized hoodies detailed in leather appliqués and embroidered with the word 'Vicious.'" 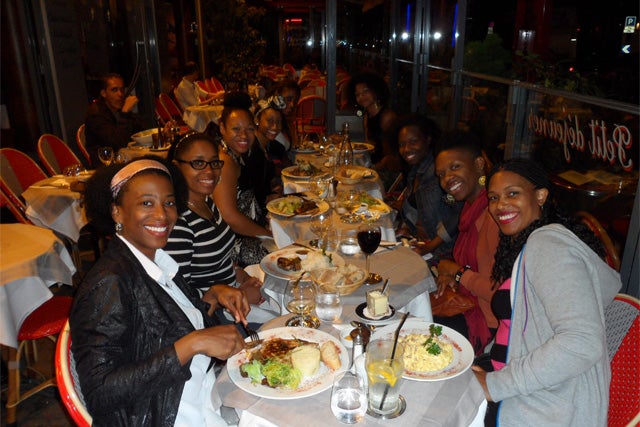 Could you see the audience reactions while you guys were performing? What has the response been like?
"What happened was a very organic and shared experience for every single person in that stadium. To be honest, with my veil of Dandelion hair, I could hear the audience more than I could see them. However, as we moved, grit, and gave it our all, the audience too began to send that energy back to us by cheering us on with what I’d describe as a desire to support us to the end. I must admit that when facing the audience directly I made sure to give them my fiercest expression, but had I seen Bill Cunningham’s charming schoolboy grin during the performance there’s no way I would have been able to resist giving him the same smile.

"There has been an overwhelmingly positive response from the fashion community who understood that the intention was to challenge standards of beauty that have dominated our industry to the detriment of untold numbers of women. A sentiment that even brought the audience members to tears with its power. On the flip side, there has been concern from some that our performance perpetuated stereotypes of the 'angry black woman' due to the use of the grit face."

Explain 'grit,' please! Aside from all the other differences between Vicious and a regular group of models, that scowl was definitely one of the most striking components.
"The intense expressions you saw are known as “grit,” and, yes, it is very common to step for black sororities and fraternities. It is used to symbolize two things: 1) To hide the pain of past atrocities suffered and 2) To intimidate the competition during performances. Had we been strolling down the catwalk with Vaseline-d beauty pageant smiles, we wouldn’t have been true to the tradition of
step and the effect would have been lost. I read a Youtube comment that had an interesting take. It read: “I'm pretty sure that if for the last 60+ years they've been telling you you're not thin enough,﻿ white enough or beautiful enough to partake of fashion, you'd have the same face. :)” Also let’s not ignore the fact that Rick Owens blew the competition out of the water with his grit. SHUT DOWN!" 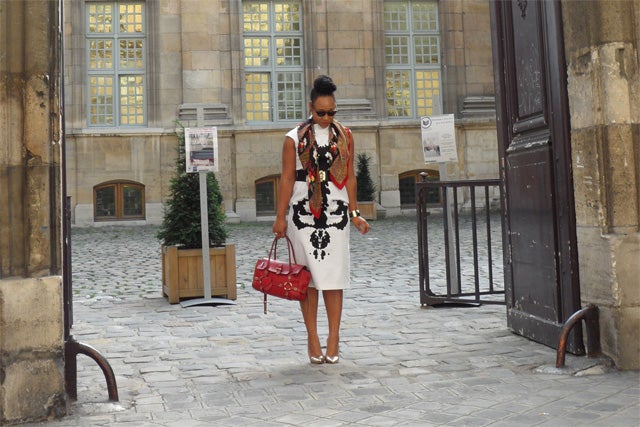 Throughout it all, what was the craziest thing that happened?
"After the performance was done and I managed to get the tears of joy under control as I approached Carine Roitfeld in the backstage mayhem, and in the midst of my gushing she interrupted me to say, 'You were great. I want to take a picture with you.' I felt like man touching the hand of God on the ceiling of the Sistine Chapel. Is that too much? Who cares? Carine thinks I’m great."

For more images, follow @shaunteleny and @TheRealSoulSteps on Instagram.
Unbothered
As We Mourn The Death Of Lauren Smith-Fields, Where Is The Justic...
UPDATE: After much public outcry for answers regarding the death of Lauren Smith-Fields, a Bridgeport, Connecticut medical examiner ruled her death as “a
by Stephanie Long
Unbothered
The War On “Wokeness” Is A War Against Martin Luther King Jr.’s L...
Today may just be my least-favorite day on the internet, and yet, it’s one of my favorite days of the year. Every year on this day, I re-read Dr. Martin
by Kathleen Newman-B...
Somos Latinx
What Latinxs Are Manifesting for 2022
With the end of yet another strange year comes the opportunity for new intentions, reinventing ourselves, and reimagining our realities. 2020 shook us to t
by Jacqueline Delgad...
Advertisement
Somos Latinx
Why Puerto Rican Christmas Carols Are a Symbol of Patriotism
For all the political limbo Puerto Ricans have endured in the last 500 years, one thing is clear: come Christmas, we’ll cook lechón asado, improvise pat
by Frances Solá-Sant...
Somos Latinx
The Mirabal Sisters Fought Bravely Against State Violence—These D...
The names Patria, Minerva, and María Teresa Mirabal are synonymous with resistance. Across the Dominican Republic and Latin America, people young and old
by Jasely Molina
Somos Libres
How Republicans & Democrats Weaponize Latinx Trauma to Get Votes
Daniela Ferrera had stopped at a red light on October 11, 2020, in the Miami neighborhood of Westchester, where a pro-Joe Biden caravan was making its way
by Raquel Reichard
Somos Libres
Haiti Aided Latin American Independence Movements; Latinxs Are Re...
In 1815, Spain’s defeat of Simón Bolívar’s revolutionary army in Venezuela nearly extinguished the dream of independence in South America. After the
by France Francois
Somos Libres
My Father Was Forced to Flee His Country; That’s Exactly Why I Pr...
Like many first-generation Latinx people living in the United States, I grew up hearing stories of liberation movements, government brutality, extreme poli
by Lola Méndez
Somos Libres
Loverbar Was A Safe Space For Queer Puerto Ricans; That’s Exactly...
"It would be irresponsible of me to call it a safe space. But I will try my fucking damnest every single day to make it as safe as possible.”
by Mercedes Viera
Somos Libres
The Word “Latinx” IS A Betrayal To Latinidad. That’s Exactly The ...
Latinx is a betrayal. It’s an attack. It’s a butchering of Spanish. And that's why I use it.
by J. A. O.
Work & Money
The Pandemic Exposed The Lie Of Women’s Equality. Where Do ...
As many women face increasing pressures from work and home, activists and experts urge federal action
by Jana Cholakovska
Coronavirus
The FDA Has Officially Approved Pfizer’s COVID Vaccine. Wil...
Update: On Monday, August 23, the FDA approved the Pfizer/BioNTech COVID-19 vaccine, making it the first officially licensed vaccine against the coronaviru
by Danielle Campoamor
Advertisement
Advertisement
Discover
R29 Stories & News
Watch
R29 Original Series & Films
Shop
R29's Most Wanted