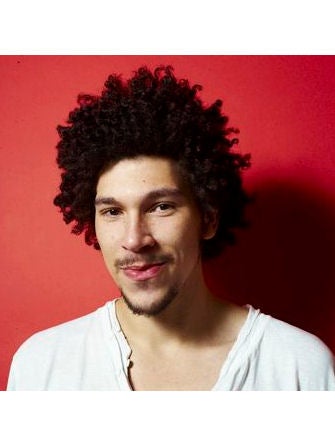 Photo: via @fryjoel
Hizdahr zo Loraq, the mysterious "young scion of an ancient Meereenese family," will be played by British actor Joel Fry in Game of Thrones, Season 4. His role, introduced originally in Books 4 and 5 of the Songs of Fire & Ice series, involves a crucial encounter with Mother of Dragons, Daenerys Targaryen. Fry previously appeared in 10,000 B.C.
As avid GoT viewers and readers know, Meereen is the largest of the great Slaver Cities of Slaver’s Bay. The other two prominent cities are Astapor (the place Dany formed her own army) and Yunkai (the population she liberated at the end of Season 3). In the upcoming fourth season, Meereen will come into its own as a key setting.
Fry's casting is the latest and likely final addition to the new season's lineup. Other new cast additions include Homeland's Pedro Pascal as Prince Oberyn Martell, Rome actress Indira Varma as Ellaria Sand, Sherlock's Mark Gatiss as a Braavosi banker and, most curiously, Icelandic indie band Sigur Ros in an enigmatic role we're excited to see develop.
(Entertainment Weekly)
TV Shows
All The Celebrities Who’ve Been On The Masked Singer...
by Ariana Brockington
Reality TV
There’s No Way The Masked Singer’s Crocodile I...
Every season of The Masked Singer has one contestant who can dazzle the audience and panel with their voice and dance moves. So far, only one contestant wh
by Ariana Brockington
Reality TV
The Masked Singer Mushroom Has To Be One Of These 3 Singer...
We could watch history repeat itself on The Masked Singer season 4. Last season, Night Angel was introduced in Group C and quickly became the one to watch.
by Ariana Brockington
TV Shows
The Masked Singer’s Sun May Have Posted A Giant Spoi...
The Masked Singer boasts each episode about the intricate steps everyone on set takes to ensure that each celeb remains anonymous until they are unmasked o
by Ariana Brockington
Shopping
16 Gifts Made For Your Favorite TV-Binge Watchers
by Alexandra Polk
TV Shows
The Obamas Are Reportedly Working On A Comedy About President Tru...
It’s rare that a former president will openly criticize the presidential policies of his successor, but in the case of Donald Trump, former POTUS Barack
by Ineye Komonibo
K-Pop
BTS Helps The World Feel A Little Smaller — & We Need It More Tha...
Like the rest of us, the South Korean group had to put their 2020 plans on hold. Here, they tell Refinery29 how it let them just BE.
by Natalie Morin
Christmas Movies
38 Romantic Christmas Movies You Can Stream Right Now
by Rosie Knight
Book Recommendations
The Best Political Fiction To Read After This Tumultuous Year
by Shannon Carlin
Gift Guides
20 Gift Ideas For Bookworms (That Aren’t More Books)
by Cortne Bonilla
Cults
The Next Too-Crazy-To-Be-True Cult Docuseries Is Here & It Has Al...
For the cult-obsessed who thought HBO’s NXVIM show The Vow was wild, it’s time to level up. Consider this new documentary series your Final Bos
by Natalie Morin
TV Shows
So, You Finished The Queen’s Gambit? Watch These 2...
by Lydia Wang
Discover
R29 Stories & News
Watch
R29 Original Series & Films
Shop
R29's Most Wanted