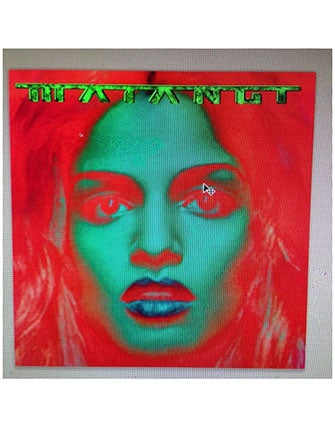 Photo: via @miamatangi.
Leave it to M.I.A. to never keep a good thing under wraps! The singer let it slip earlier this morning, at the Balenciaga show in Paris to be exact, that she's working on a very fancy designer collab. The brand in question? None other than Donatella Versace's Versus line, of course, where outlandish prints and over-the-top luxury with a cheeky twist are completely at home. It makes perfect sense: The costumes from M.I.A.'s "Bad Girls" video could have been pulled straight out of the Versus design labs.
The singer didn't tell WWD much, except to say that the collab will be drop in the coming weeks, though we assume that M.I.A.'s involvement is part of a long-term Versus project that will include multiple celebrity collabs (the first of which was with J.W. Anderson). After many controversies, M.I.A.'s Matangi is finally on the way (she even released cover art yesterday on her Instagram), so the announcement was bound to come sooner or later. The album officially drops on November 5, so the collection will probably be conveniently timed not long after. (WWD)
Music
Jhay Cortez Steps Into The Spotlight With Timelezz
For years, Jhay Cortez paid his bills by making music for other artists. He was one of the masterminds behind J Balvin’s record-breaking album Vibras in
by Frances Solá-Sant...
Unbothered
Emmys? We Don’t Know Her. These Are Unbothered’s Best TV Shows Of...
The 73rd Primetime Emmy Awards are on Sunday (September 19). The prestigious awards show is usually how Hollywood gauges the best of the best of the most r
by Kathleen Newman-B...
Unbothered
CBS Will Now Turn Its Controversial Activist Competition Series I...
Updated September 16, 2021: After a wave of backlash followed the announcement of its controversial new series, CBS is going back to the drawing board to r
by DarkSkyLady
Advertisement
Entertainment
Selena Gomez Is On The Case
Selena Gomez watches true crime for the same reason many women do: To be prepared.  “In every situation, I automatically think of what I would do to
by Anne Cohen
TV Shows
Wait, Does Bachelor in Paradise End Early This Season?
“This could be the end of Paradise,” one worried contestant says in the promo for the September 21 Bachelor in Paradise episode. No, she wasn&#
by Martha Sorren
Entertainment
Bachelor in Paradise Season 7, Episode 8 Recap: There’s No...
Last week’s episode of Bachelor in Paradise left many in Bachelor Nation hoping for the same thing: Brendan and Pieper facing the same fate as Chris and
by Lia Beck
The Bachelor
Everyone Who’s On Bachelor In Paradise This Season —...
by Martha Sorren
Unbothered
Give The New Generation Of Black Pop Girls Some Time — They’...
On Sunday, September 12, MTV celebrated 40 years of music and music videos at its annual Video Music Awards. The event featured highly anticipated performa
by Ineye Komonibo
Entertainment
Shang-Chi Depicts A World Where Asian Women Can Be Human &...
Spoilers ahead. If there’s one scene from Shang-Chi and the Legend of the Ten Rings I could watch over and over again, it’s Xu Xialing’s introduction
by Roslyn Talusan
Podcasts
This Is What Navigating 2021 Looks Like For Black Women, Accordin...
Go Off, Sis, the podcast from Refinery29’s Unbothered, is back for season 5. And while we’re still in the panorama, the upside is this: We’re finally
by Taiia Smart Young
Unbothered
In Celebration Of Really Love & The Slow Burn
This goes without saying, but dating as a millennial can be a hellish experience. Between extended “talking stages,” ghosting, and starting over every
by Ineye Komonibo
Unbothered
Looking Back, Love Jones Is Actually For The Birds (ItR...
by Kathleen Newman-B...
Advertisement
Advertisement
Discover
R29 Stories & News
Watch
R29 Original Series & Films
Shop
R29's Most Wanted