Skip navigation!
Story from Sex
Back in March, the Bill & Melinda Gates Foundation announced a peculiar prize: They would award $100,000 for the creation of the "next generation condom." Their perspective was that the easier and more pleasurable it is to use a condom, the likelier people are to use one each time they have sex. Obviously, this could be hugely impactful on rates of both unplanned pregnancy and STIs.
So, what have the condom innovators been up to? This, apparently: A beautiful, bizarre origami condom that unfolds instead of unrolling.
For the designer, Danny Resnic, this project is personal — he contracted HIV after a condom broke. Now, he hopes the roomier design and easy-to-use model will encourage people to use protection every time — in turn increasing their chances at staying healthy. But what do you say? Is this cool and innovative in a way that you would be excited to use it? Or is it cool and innovative, but not quite practical? (The Atlantic) 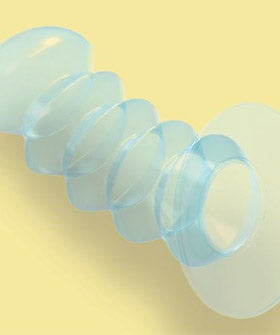 Image: Via The Atlantic.
Halloween
34 Sexy Halloween Stories That’ll Inspire You For The Big Night
by Sarah Van Cleve
Wellness
Find A New Boo With These Halloween Pick Up Lines
by Sarah Van Cleve
Sex Toys
These Halloween Sex Toys Will Make Your Costume Complete
by Erika W. Smith
Sex
Losing It: Does Virginity Even Matter Anymore?
Societal construct? Religious belief? Here, 13 members of Gen Z tackle the endless debate between purity and pleasure.
by Lydia Wang
Sex
7 Sexy Halloween Role Play Ideas
by Kasandra Brabaw
Sex
A Sexpert’s Guide To Toys That Make Unforgettable Gifts
by Mary Frances Knapp
Relationships
What To Gift Your Long-Distance Partner (Besides A Surprise Visit)
by Cory Stieg
The Sell Out
This Bestselling Vibe Is BACK In An Iconic New Hue (But Not For L...
You never want something until you can’t have it. So, each week in The Sell-Out, we’re getting the scoop from your favorite retailers on what‘s
by Karina Hoshikawa
Coronavirus
Quarantine Might Be Ruining Your Relationship. Here’s How T...
This year, we’ve learned that being cooped up indoors is a small price to pay to help halt the alarming spread of coronavirus, officially known as CO
by Elizabeth Gulino
Wellness
How To Be An LGBTQ+ Ally To Your Friends
by Sarah Van Cleve
Prime Day
These Kind-Of-Iconic Sex Toys Are All On Sale For Prime Day
we can count on Prime Day's deals to deliver more price accessible bestselling vibrators and sensual massage lotions directly to our doorsteps.
by Mary Frances Knapp
Most Wanted
R29 Readers: Your Favorite Sex Toy Brand Is Up To 70% Off (But No...
by Karina Hoshikawa
Discover
R29 Stories & News
Watch
R29 Original Series & Films
Shop
R29's Most Wanted