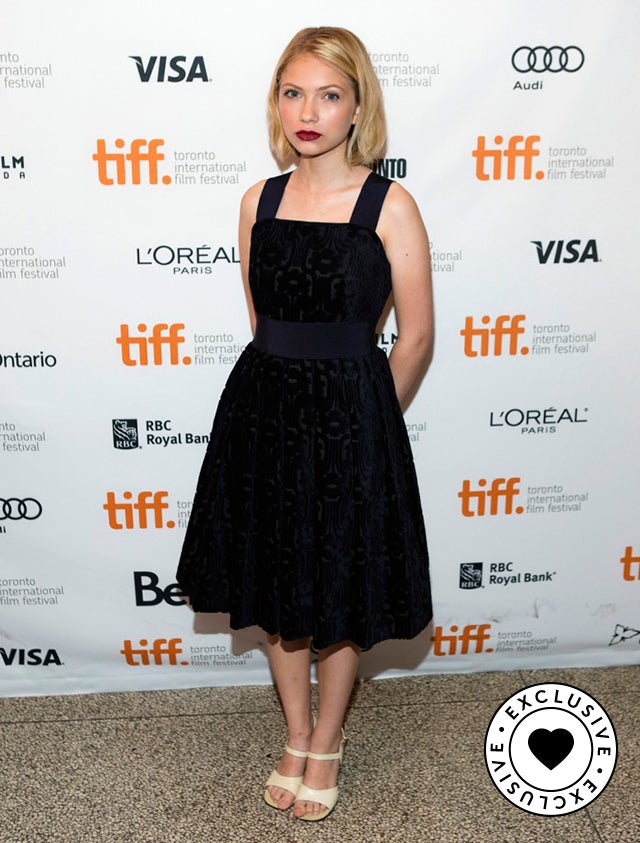 Photo: © MARK BLINCH/Reuters/Corbis
It felt like it was only a matter of time before everyone’s favorite fashion blogger-turned-renaissance girl added “professional actress” to her impressive resume. Well, it finally happened. In Nicole Holofcener’s film Enough Said, Tavi Gevinson makes the flip from the computer screen to the silver screen, playing against type as a directionless teen who befriends her BFF’s mom, played by Julia Louis-Dreyfus. But, as much as the film is notable for marking Tavi’s acting debut, it’s also the posthumous farewell to the legendary James Gandolfini, who plays Louis-Dreyfus’ love interest (and passed away just months before the film had its well-received Toronto premiere). Here, our favorite 17-year-old high school senior (and editor of Rookie) discusses what she learned from the legendary actor, suffering from “impostor syndrome" on set, and the movies that changed her life.
Advertisement

Are you used to being the interviewed subject yet?

“It’s a combination. I think interviewing people for Rookie has made me understand the ropes of giving a good interview. I like being on both sides.”

What makes a good interview?

“Well, when I’m thinking of interview questions and I feel like I already know what they’re going to say, I won’t ask it. I guess I try to be honest and conversational no matter which position I’m in.”

Have you interviewed anyone that made you completely geek out?

“Oh, everyone. Daniel Clowes — I’ve never been more nervous to interview someone. I also loved talking with Greta Gerwig. There are so many.”

Some people have drawn the comparison to the character you play in the film, a girl forced to grow up faster than her peers, to you in real life. Do you agree with that?

“I’ve never made that connection. That was always something that, for me, felt different. Eva, Julia’s character, in her giving manner, was supposed to give Chloe advice on having sex with her boyfriend. Eva was also like, ‘Don’t go to college!’ Albert got Chloe a job at a television archiving place. That always felt different from me because I’ve always had a lot of ideas of what to do, and Chloe is a high school graduate with no clue.”

The movie, in essence, is about navigating romance in middle age. What would you say to your younger fans who want to see the film? Is there something they can take away from it?

“For one, I think you don’t necessarily have to relate to something directly to know the feeling. There’s a time in the film when things go wrong. When I first saw it, I started crying because I was in the middle of a breakup. I mean, right now I’m addicted to Breaking Bad, and I am in no way into chemistry and/or meth. There’s always something to take away. Nicole’s films feel very human and honest; they have so many moments that really get to you even if you’ve never personally experienced it. There’s a part where Julia goes into her daughter’s room to watch her sleep, and kisses her on the forehead, or something. I remember Nicole asking to make her lip sweatier because that’s what it looks like when your kid is asleep. There are all these nuances that make it a warm film. “

Do you think it’s harder for people to find love as they get older?

When preparing for the film, did you ask any of your fellow actors for advice?

“I remember talking to Lena Dunham and confessing I have imposter syndrome. Like, even though this is one thing I want to do, I still feel like I don’t belong. She was very helpful. She pointed out that she feels that sometimes, but it’s all part of executing some kind of vision. There are so many people who act and do other things. Lena is one of those.”

Were you nervous on set? Did you ever feel like you would be overstepping your boundaries if you had an idea?

“I was very nervous, but not for any reason. Nicole would ask me if what I was saying is what a teenager would say, and if not, she told me to improvise to make it sound real. That made it very easy to feel comfortable, to make it more real.”

There’s a running narrative that Tavi’s over the fashion world. Do you see any similarities between the fashion industry and the movies?

“I think everything is like high school. I remember when I first started going to fashion week, people would be like, ‘It’s so corrupt! You precious flower!’ And, I was just like, ‘I’m from middle school. I’m fine. I get bullied on the regs.’ There are awful people everywhere, and there are passionate people everywhere. You just have to surround yourself with good people that inspire you. That’s the most you can do.”

You have a knack for getting into things from before your time. Was Seinfeld a part of cultural lexicon?

“Oh, totally. It was something I had to get over — meeting Julia Louis-Dreyfus. I love Veep, too. That was very cool.”

Did you chat Seinfeld with her?

“No. You never know how someone will respond to that. I once tweeted something about it, and she retweeted it. I feel like she’s not a person who won’t talk about her past.”

What was James Gandolfini like on set? What did you learn from him?

“He was very warm and kind. He had a very dry wit. I was really nervous, and had a bit of imposter syndrome with him. It was nice to sit down at the breakfast table with him and Julia. He would ask me about my life, and make me feel welcome, like I did have a place there. The movie set environment is nice, but it’s on a schedule and everyone is always doing their own thing. He was able to observe everything.”

What are some movies that changed the way you look at the world?

“Ghost World, and I’m Not There was probably my first 'weird' movie I watched on my own without being suggested to — a lot of Wes Anderson movies. I love The Virgin Suicides.

Do you ever watch movies from the '60s, '70s, like the French new wave, and American independent cinema?

Do you think all magazines are doomed?

“No. I think every publication is different. Some publications are more suited for print, and some function digitally. I don’t think magazines are doomed — I won’t let them be!”

What are some websites you check daily?

“I look at Grantland, BuzzFeed, and Refinery29, and I’m not just saying that!”

How much attention do you pay to Rookie’s page views, analytics, and the overall business side of it?

“I just checked for the first time since it started. It really freaks me out, and makes me anxious in a way that it shouldn’t. I don’t really look at it."

What advice would you give to someone who wants to start their own blog and get it seen by lot of people?

“I think being young can make you feel more ready to do it. I would say to listen to that part of you that’s passionate, that’s seeing things for the first time, and is excited about it. It’s all about translating what you’re seeing to your readers in a fun way. The most exciting writing, even if it’s not something I’m interested in, is by someone who’s excited about what they’re writing about. ”