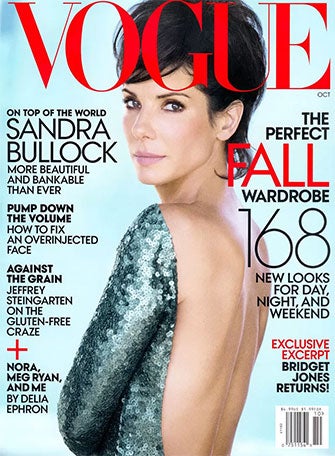 Via Fashion Gone Rogue/Vogue
Sandra Bullock may not feel like the first person named as a longtime Vogue cover girl, but this October, the Oscar winner will make her fifth appearance on the mag's front. (Her first appearance was in 1998.) For her current cover, Sandy looks just as radiant as ever, with her closely cropped hair beginning to grow out after shooting the intense (and already buzzed about) film, Gravity. However, a testament to the fact that everyone is privvy to those awkward growing out stages, Bullock's hair is veering into some major soccer-mom territory — part mullet, part Lois from Malcolm In The Middle. Which is fine, because she offsets the whole vibe with a steady gaze and a slinky, backless Marc Jacobs dress.
Bullock has come a long way in her public perception, from bucking her rep as a one-note action star (Demolition Man, anyone?), to the go-to for goofy comedy, to a respected actress who is very likely staring her second Oscar right in its golden face. Get ready for an autumnal Bullock blitz — this Vogue cover is just the start of it. (Fashion Gone Rogue/Vogue)
Unbothered
Actually, Netflix, Content Like Dave Chappelle’s Transphobic Come...
If you are extremely online, you know the internet has been dominated by take after take — some thoughtful, some ignorant — on Dave Chappelle’s recen
by Kathleen Newman-B...
Unbothered
Years After Her Death, The Science Community Is Still Treating He...
In the 1950s, a Black woman named Henrietta Lacks walked into Johns Hopkins Hospital to be treated for cervical cancer, and her cells would go on to be us
by Ineye Komonibo
Somos Libres
Why Black Puerto Rican Women Are Leading an Anti-Racist Media Ren...
While the 2020 Census was essential to many communities across the United States, it held a different meaning for Puerto Ricans. Battered after a decades-l
by Frances Solá-Sant...
Advertisement
Unbothered
R. Kelly Facing Life In Prison After Being Found Guilty Of Racket...
This story contains discussion of sexual violence. Please proceed with care. Updated September 27, 2021: Months after being charged and indicted for nine g
by Ineye Komonibo
Unbothered
Jennifer Hough’s First On-Air Interview About Nicki Minaj &...
*Editor’s note: this story contains discussions about sexual violence, threats, and intimidation. Please read with care.  A month after publicly all
by R29 Unbothered
Unbothered
CBS Will Now Turn Its Controversial Activist Competition Series I...
Updated September 16, 2021: After a wave of backlash followed the announcement of its controversial new series, CBS is going back to the drawing board to r
by DarkSkyLady
Unbothered
Megan Thee Stallion Wins Two Big Legal Victories — Against Her La...
Megan Thee Stallion scored two major legal wins this week, after a judge granted her the go-ahead to release the remix of BTS’ Butter that she is feature
by Tayo Bero
Unbothered
American Idol Alum Syesha Mercado Is Still In The Midst Of...
Singer and American Idol alum Syesha Mercado has regained custody of one of her two young children who were taken from her by authorities in Florida. Merc
by Tayo Bero
Unbothered
The Woman Assaulted By Nicki Minaj’s Husband Is Setting The Recor...
*Editor’s note: this story contains discussions about sexual violence, threats and intimidation.  Jennifer Hough —  who was assaulted by Nicki Minaj?
by Tayo Bero
Entertainment News
What You Need To Know About R. Kelly’s Trial That’s B...
This story contains discussion of sexual violence. Please proceed with care. On August 18, singer and producer R. Kelly will finally face trial for a litan
by Natalie Morin
Entertainment News
‘Self-Made Legend’: Lil Nas X On Being A Gay Icon And...
Lil Nas X has had an amazing year but like anyone in the early stages of a career on the rise, the journey hasn’t come without its share of struggles, do
by Tayo Bero
Entertainment News
Britney Spears’ Dad Is Finally On His Way Out Of Her Conservatorship
In a surprising and sudden development in Britney Spears’ ongoing conservatorship battle, her father has finally decided to step down from her conservato
by Natalie Morin
Advertisement
Advertisement
Discover
R29 Stories & News
Watch
R29 Original Series & Films
Shop
R29's Most Wanted