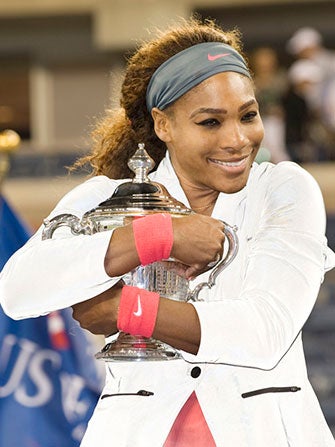 Photo: Cynthia Lum/Icon SMI/Corbis
Tonight, we bring you not one but two breaking news items: First of all, Serena Williams won her fifth U.S. Open title! Second of all, Serena Williams appears to be some kind of wizard.
Williams had no problem taking the prize in a final match against Victoria Azarenka on the court in Queens tonight. While Azarenka has demonstrated surprising resilience and speed, particularly in her previous match against Flavia Pennetta, Williams' killer moves took the Belarusian player (ranked number two in the world) down despite complaints of heavy wind, delivering nine super-powered aces throughout the match. As for the wizardry, well, it's not just about tennis — Serena has got some serious beauty magic going on. We couldn't help but notice Williams' amazing cat-eye makeup, a bold move, though we'd expect nothing less from her. She always looks pulled-together and even downright chic on the court, often sporting bright, poppy mini-dresses and earrings we'd be scared to wear on the streets of NYC, much less in a cut-throat tennis match. But her beauty game was the real show-stopper this evening, and the look was as stunning and on-point as her serve. Somehow, what must've been a considerable amount of sweat didn't get in the way of things, and she looked flawless from start to finish. Oh, and by the way, we're definitely digging her full eyebrows. Perfectly shaped and groomed, this is a great example of how this of-the-moment trend doesn't necessarily have to be overbearing.
So, in short, while you were cleaning the grout between your shower tiles or eating Mac-'n'-cheese or whatever else it is you do on your sacred Sunday, Serena was serving up some history in more ways than one, and making a cool $3.6 million in the process. While the sheer greatness of her victory goes without saying, we have to applaud her for going all the way in the makeup department. It's exactly the kind of bold, powerful choice that makes her such an interesting and watch-able player. Take it as a word of advice — whatever you're doing that's awesome these days, a solid cat-eye can make it that much better.
Makeup
Should Your Makeup Routine Change When You Wear A Mask?
At this point in quarantine, many of us have faced the relatable, low-stakes dilemma of whether or not to wear makeup when venturing outside the house. Whi
by Megan Decker
Makeup
9 Lengthening Mascaras That Make Mile-Long Lashes
by Karina Hoshikawa
Skin Care
The Best Holiday Gifts At Sephora For Any & Every Budget
by Thatiana Diaz
Beauty
We Found The 13 Most Giftable Makeup-Brush Sets
by Karina Hoshikawa
Most Wanted
Stila’s Cult-Favorite Eyeliner (& Everything Else) Is 30% O...
by Alexandra Polk
Beauty
The Grooviest Halloween Costume Inspiration, Courtesy Of ’7...
by Megan Decker
Makeup
The Best Glitter Eyeshadows For Clean Freaks Who Hate Glitter
by Us
Beauty
3 Chic Makeup Trends You’ll See Everywhere This Halloween
by Megan Decker
Beauty
27 Latinx-Owned Beauty Brands To Support Now & Always
by Thatiana Diaz
Beauty
Every Fenty Beauty Product Is Over 25% Off Right Now
by Karina Hoshikawa
Prime Day
Lady Gaga’s Beauty Brand Is 40% Off For Prime Day
by Karina Hoshikawa
Makeup
Every Single Stila Product Is 30% Off For Prime Day
by Karina Hoshikawa
Discover
R29 Stories & News
Watch
R29 Original Series & Films
Shop
R29's Most Wanted