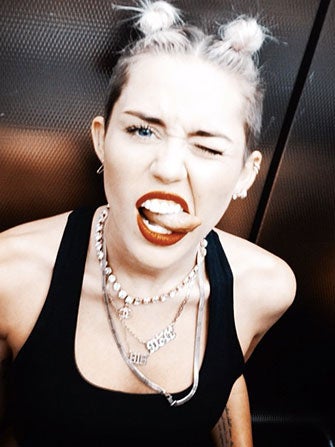 Photo: Via @mileycyrus.
Just when we thought the VMA controversy was over, rumors have spread that Miley Cyrus' cover for the December issue of Vogue has been nixed because of her much-lambasted performance during the awards show. Hollywood News Daily has an unnamed insider saying that Anna Wintour was so appalled by Cyrus' antics, she decided to scrap all the photos from the shoot.
However, we did a little digging and it seems that the cover was never set in stone and a photo shoot had even yet to transpire. Rather, it was an idea the magazine was toying with, but has since decided against (though we can only speculate as to why). Certainly, it's not exactly the Miley vs. Anna showdown the initial reports described (shocker, huh). Still, it's not surprising that Cyrus would be pegged for the cover, especially as fashion glossies have become reliant on big-name celebrities to sell copies. After all, the ever-classy Harper's Bazaar didn't have much of a problem featuring Cyrus in full-blown couture — though we have to wonder if they're quietly shuffling that issue out of the spotlight now.
Advertisement
Cyrus' approach to more formally orchestrated coverage and interviews has been rather interesting since she debuted her newly revamped image (vamp being the key idea), steering away from some of the more major fashion mags and going for alternatives like Billboard and Notion. A lot of publicists would say that securing a Vogue cover is an absolute necessity for a star looking to legitimize a new image, but we wouldn't be surprised if the folks over at Camp Miley aren't fussing over this. In fact, given her intense desire to be subversive, maybe Cyrus herself feels that Vogue is a little too high-brow for her brazen, Molly-induced persona? Frankly, we wouldn't be surprised if Ms. Cyrus pops up on the cover of CR Fashion Book in the next year. The equally high-end, and in many ways, more exclusive magazine is known for its surprising cover girls. We're just putting it out there so that in case Carine Roitfeld does swoop in, we can say we told you so. Either way, Cyrus is probably one of the few people on earth who can have the media eating out of her hand without Wintour's explicit approval, so we surely won't be hearing the end of her any time soon.
More on Miley, if you dare:
"That's Just Me": Miley Cyrus' First Post-VMAs Interview
Miley "Responds" To Criticism Of Her VMAs Performance
An Open Forum For All Your Miley Cyrus Feelings
Unbothered
Why Prince Harry Is (Still) Wrong About Unconscious Bias
By now, you would have undoubtedly seen or heard about at least one of Prince Harry’s interviews discussing his new memoir, Spare. Since its release on T
by Maxine Harrison
Unbothered
Megan Thee Stallion Isn’t The One On Trial
“I wish he would have just killed me, if I knew I would have to go through this torture,” rapper Megan Thee Stallion said last week during an emotional
by Tayo Bero
Unbothered
Russian Court Denies Brittney Griner’s Appeal, Upholds 9-Ye...
UPDATE: On Tuesday (Oct 25), a Russian court rejected WNBA star Brittney Griner’s appeal of her nine-year prison sentence for drug charges. After the
by Ineye Komonibo
Advertisement
Unbothered
Say Goodbye To Macy Gray — She Outed Herself As A TERF
On July 4, a day when selective freedom was celebrated in America, it was only fitting that Macy Gray chose to go on known bigot Piers Morgan’s show Unce
by Wisdom Iheanyichukwu
Unbothered
White Supremacy Is To Blame For The Buffalo Massacre. That’s It.
A clip of CNN reporter Victor Blackwell breaking down in tears live on air while talking about last weekend’s horrific massacre of 10 Black people in a B
by Kathleen Newman-B...
Unbothered
Megan Thee Stallion’s Bombshell New Interview Reveals Devastating...
In July 2020, Megan thee Stallion was involved in an intense police stop after attending a celebrity pool party in Los Angeles, leading to the shocking rev
by Ineye Komonibo
Unbothered
Ari Lennox Shares An Update After Her Amsterdam Arrest
Updated December 2, 2019: Days after being detained at Schiphol Airport in the Netherlands, Ari Lennox has resurfaced on social media to give worried frien
by Ineye Komonibo
Unbothered
Two Men Convicted For The 1965 Assassination Of Malcolm X Have Be...
Nearly 60 years after the shocking assassination of civil rights leader Malcolm X, a new development in the investigation into his murder has led to t
by Ineye Komonibo
Unbothered
The Zombification of Whitney Houston
In Haitian mythology, the idea of what we now call zombies emerged from enslaved Africans’ deepest fear: not even death would bring freedom. Though suici
by Brooke Obie
Unbothered
Actually, Netflix, Content Like Dave Chappelle’s Transphobic Come...
Update: Netflix has fired the employee who was organizing an upcoming walkout (set to happen Wednesday, October 20) of trans staffers and allies in protest
by Kathleen Newman-B...
Unbothered
Years After Her Death, The Science Community Is Still Treating He...
In the 1950s, a Black woman named Henrietta Lacks walked into Johns Hopkins Hospital to be treated for cervical cancer, and her cells would go on to b
by Ineye Komonibo
Somos Libres
Why Black Puerto Rican Women Are Leading an Anti-Racist Media Ren...
While the 2020 Census was essential to many communities across the United States, it held a different meaning for Puerto Ricans. Battered after a decades-l
by Frances Solá-Sant...
Advertisement
Advertisement
Discover
R29 Stories & News
Watch
R29 Original Series & Films
Shop
R29's Most Wanted