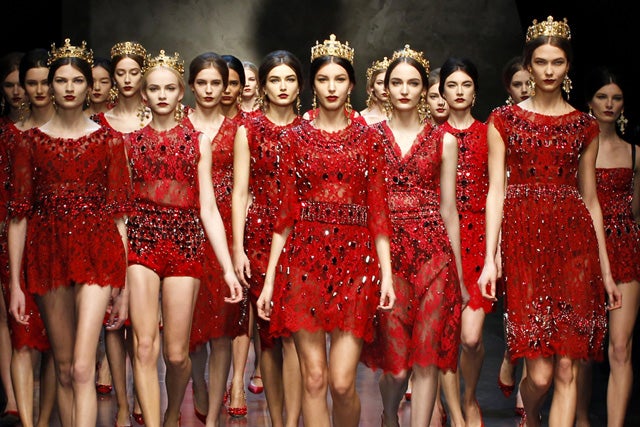 Photo: Courtesy of Dolce & Gabbana.
Yesterday, leaders from New York, London, Milan, and Paris Fashion Weeks received letters accusing the respective councils of allowing and proliferating racism on the runways. Pointing out specific designers and labels (New York's CFDA received 26 notices, the British Fashion Council received 14, the Camera Nazionale della Moda Italiana received 31, and the Fédération Française de la Couture received 44), the letter was sent by The Diversity Coalition led by former model and activist Bethann Hardison. Said Hardison, "The point of this letter is that everyone should be discussing this — I mean everyone. It's like the MTA. If you see something, say something. Well, I'm saying something."
According to the letter, “Eyes are on an industry that season after season watches design houses consistently use one or no models of color. No matter the intention, the result is racism. Not accepting another based on the color of their skin is clearly beyond ‘aesthetic’ when it is consistent with the designer’s brand. Whether it’s the decision of the designer, stylist or casting director, that decision to use basically all white models, reveals a trait that is unbecoming to modern society. It can no longer be accepted, nor confused by the use of the Asian model.”
WWD reports that Steven Kolb and Diane von Furstenberg from the CFDA have discussed the letter in light of recent initiatives to encourage more awareness of a diverse lineup, and are open and willing to speak with Hardison to discuss further steps. Other leaders, like Didier Grumbach from Paris found the letter "unreasonable." Click through to read more reactions from The Camera and elsewhere. (WWD)
Unbothered
If Your Feelings About The Queen’s Death Are Complicated, That...
On September 8, Her Majesty Queen Elizabeth II passed away at the age of 96, after 70 years as the nation and commonwealth’s monarch. In the days sin
by L'Oréal Blackett
Unbothered
The Most Disrespected Group Online Are Black Women — This CEO Is ...
“The most disrespected person in America is the Black woman…” said civil rights leader Malcolm X, more than 50 years ago. Speaking directly to Black
by L'Oréal Blackett
Abortion
Why Kamala Harris Feels ‘Optimistic’ About The Future...
It wasn’t hard to see the symbolism in the torrential rains that preceded Vice President Kamala Harris’s visit to Indianapolis, IN, on July 25. One mon
by Molly Longman
Advertisement
Unbothered
Why I’m Only A Black Woman On Sundays
I am only a Black woman on Sundays.  Let me clarify.  I am a 21-year-old Black nonbinary person. I was assigned female at birth. My pronouns are
by Reegan Saunders
Unbothered
Mo Farah Bravely Told Us Who He Really Is — Now All Trafficking V...
How do you tell people that you are not actually who they think you are? This week, world-famous British sportsman Mo Farah did so, taking the brave step o
by Banseka Kayembe
Abortion Access For All
“A Minor Victory.” Abortion Care Resumes In Three Trigger States ...
The article is being updated as more news about temporary injunctions and restraining orders impacting abortion access comes out. It was originally publish
by Molly Longman
Unbothered
On Ketanji Brown Jackson, ‘Making History,’ And The Expense Of Bl...
Update: Justice Ketanji Brown Jackson has been sworn in to the Supreme Court as the first Black woman sitting on the nation’s highest court. Jackson
by Brea Baker
Abortion
Support Abortion Access With R29’s Capsule Tee Collection
As of June 24, our constitutional right to abortion no longer exists. It’s hard not to feel helpless, angry, and scared during a time like this, but for
by Elizabeth Gulino
Somos Latinx
Why We Need To Claim Abortion As A Word Without Stigma
I was 16 years old when I had my first abortion. I’d been sexually assaulted and got pregnant. I told my mom that I needed an abortion and she said no. S
by Stephanie Loraine...
Abortion Access For All
9 Posters To Bring To Your Next Abortion Rights Rally
It’s official: The Supreme Court has overturned Roe v. Wade. On June 24, people started gathering to protest against the loss of our Constitutional r
by Elizabeth Gulino
Abortion Access For All
How To Access Abortion Care Post-Roe
This story has been updated to reflect the overturning of Roe v. Wade by the Supreme Court. The Supreme Court has decided to overturn Roe v. Wade, the 1973
by Molly Longman
Abortion
What Abortion Rights Will Look Like in Your State
In a 6-3 opinion, the United States Supreme Court has overturned federal protection for abortion. While the upcoming ruling was expected, it’s only the b
by Neda Toloui-Semnani
Advertisement
Advertisement
Discover
R29 Stories & News
Watch
R29 Original Series & Films
Shop
R29's Most Wanted