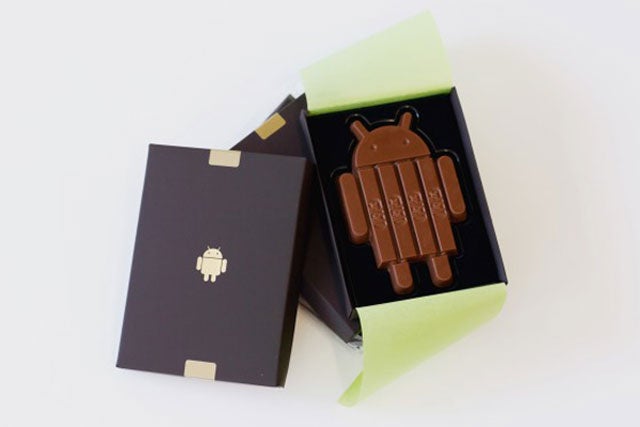 Photo: Via The Verge
Android has always had a bit of a sweet tooth when it comes to affectionately branding their device's operating systems. After Cupcake, Ice Cream Sandwich, and Jelly Bean, how much further into the confectionery realm could they venture? Rumor had it that "Key Lime Pie" would be the latest (and, arguably, most delicious) Droid upgrade, but today, we've learned that the name was simply a stealth cover-up operation. Android 4.4's real title? KitKat. Yep, as in, give me a break.
Not only will Android christen their newest platform after one of the most beloved candy bars in history, they're turning the tasty tech milestone into a full-on partnership with Nestle and Hershey. Upon its launch later this month, 50 million Android-branded KitKat bars will make their way into 19 international markets, including Australia, Brazil, Canada, Germany, India, Japan, Middle East, Russia, the United Kingdom, and the United States. As online sleuths may have already detected, there's a punchy site that playfully boasts the candy bar's specs, including its "precision confection engineering," "edge to edge display," and ability to sync perfectly with "liquid accessories." Kudos to the ad wizards behind that one!
By purchasing one of the thematic candy bars, you'll also have a chance to win Google prizes, including Play Store credits and a Nexus 7. There will even be robot-shaped chocolate to collect and devour, making this Android's most fully integrative — and whimsical — marketing endeavor to date. The sweetest thing? Android and Nestle exchanged no money to make this miracle in co-branding happen. It was all for the love of the name. (The Verge)
Dedicated Feature
How One Former Beauty Editor Found A New Community Through Video ...
Of the eight “Playroom Rules” my mother kept tacked up for my siblings and me in our childhood home, one in particular always stood out: “In Animal C
by Jennifer Mulrow
Deals
Save Up To $300 On Tech Gifts At Best Buy’s 72-Hour Sale
Extra, extra! Best Buy is holding a major post-Black Friday super sale for only 72 hours. They’ve included every perfect last-minute gift for absolut
by Mercedes Viera
Dedicated Feature
Perfect Gifts For The Most “Online” Gen Z-er (That You Can Buy No...
by Emma Turetsky
Advertisement
On-Site Shopping
A Nintendo Switch Superfan Reviews The New OLED
You’re reading an On-Site Shopping story — meaning you can browse, add to cart, and actually purchase the product recommendations featured below with
by Karina Hoshikawa
Apple Products
The Best Cyber Monday Deals On Apple Airpods? We’re Listening
AirPods were a bonafide status symbol when they debuted in 2016‚ but these lil’ buds have become standard listening accessory just like any other house
by Alexandra Polk
Pets
Is The Furbo Dog Camera Worth The Hype? An Investigation
As most pet owners will attest, we’re willing to try just about anything if it might our four-legged friends’ lives better. But with so many ne
by Karina Hoshikawa
Most Wanted
I Tested A Really Ridiculously Good-Looking Air Conditioner
Window air conditioners are a necessary evil. No matter how heavy, leaky, noisy, energy-sapping, and eyesore-y, these units may be, they’re a summert
by Alexandra Polk
Living
How TikTok’s Favorite Island Aunty Spends Her Time Online
Welcome to Internet Diaries, a monthly interview series that asks the internet’s favorite people where and how they spend their time online. What are
by Michelle Santiago...
Living
Does Anyone Use Snapchat Anymore? Actually, Yes
Maeve Ginzberg remembers when she first downloaded Snapchat. She was in high school, and did it at the request of her best friend; their long streak would
by Michelle Santiago...
TikTok
Who Is “That Girl”? She’s All Of Us
This year, I’ve spent more money than I feel comfortable admitting on making my life and myself more beautiful than ever. I’ve always found inspiration
by Michelle Santiago...
Parenting
It’s Time To Abolish #BoyMom & #GirlDad
I’m at an age where scrolling through Instagram involves seeing a whole bunch of babies. To be clear, I definitely do not take issue with that. Kids
by Olivia Harrison
Home
These 7 Outdoor Projectors Are The Ones To Watch, Literally
by Alexandra Polk
Advertisement
Advertisement
Discover
R29 Stories & News
Watch
R29 Original Series & Films
Shop
R29's Most Wanted