Skip navigation!
Story from Fashion
Liberty, one of London's most beloved department stores, has just announced that this autumn it is going to have its own three-part TV show called "Making Liberty." The 138-year-old institution has opened its doors to a documentary crew to record all of its comings and goings. As managing director, Ed Burstell, explains to WWD, "I think it will come out as a nice balance of the store’s family values and culture, but also being very modern and relevant. There’s a real focus on the business of fashion, they will be filming us at all the Fashion Weeks, seeing the strategy and the buying meetings; it will be a balance of that and the people that go into it."
Advertisement
Burstell will feature prominently in the show, as will Kate Brindley, head of marketing and communications, who says, "I really hope that "Making Liberty" will bring a new customer to Liberty and show people that perhaps haven’t visited the store in a while that we aren’t just seeping in our heritage, or resting on our (floral-printed) laurels, or just 'expensive.' We are a brand that thrives on innovation and we have something for everyone." Here, here — it is definitely a pure, unadulterated joy to lose an hour or two in Liberty. The shoe department leaves us breathless, and the beauty hall is a treasure trove of hard-to-find brands and cult-perfume labels. And don't even get us started on its jewellery department. Brava, Liberty — we look forward to getting to know you just a little bit better. (WWD) 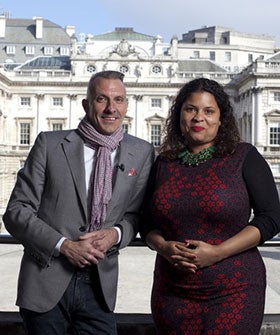 Advertisement
Unbothered
Who Run The World? Black Girls Shine At Footaction’s No 1 Way HBC...
Did someone say Black Girl Magic? Five HBCU fashion students had the opportunity to present their designs during New York Fashion Week and it was an event
by Venesa Coger
Shopping
This Retro Puffer Jacket Is Everywhere This Winter — Here’s Why
Every season, there seems to be one piece that’s having a moment — it’s stocked in all of our favorite stores, posted all over our feeds, and ev
by Emily Ruane
Flats
The Rothy’s Mary Jane Flat Is Like A Present For Your Feet
If you’ve spent these past few months trudging through winter in snow boots and chunky leather shoes, we’ve got good news for your feet: freedom is
by Amanda Randone
Shopping
Everlane’s Sold-Out Bodysuits Are Back In Stock, Baby
Everlane’s been known to turn out its fair share of sell-out status items, with its Supima-cotton onesie most recently taking that coveted title. Aft
by Elizabeth Buxton
Celebrity Style
From Matching Sweatsuits To Custom Louis Vuitton — Sophie Turner&...
by Eliza Huber
Fashion
Is Milan Fashion Week Street Style The Hidden Gem Of Fashion Month?
by Eliza Huber
Fashion Week
Detach Your Collar, I Dare You
by Eliza Huber
Fashion
7 Looks To Steal From London Fashion Week
London Fashion Week drew to a close this week and, set against a backdrop of Brexit, the environmental crisis, and coronavirus, for many showgoers it was h
by Georgia Murray
Fashion
25 Breezy Beach Cover-Ups To Lighten Up Your Carry-On
As we move towards planning our grown-up, sand-filled getaways, our limited carry-on space means needing a proper swim cover-up that does more than just on
by Ray Lowe
Fashion
America Has As Many Victoria’s Secrets As It Has Malls. So — Now ...
Today, private equity firm Sycamore Partners bought a 55% stake in Victoria’s Secret in a deal that took the lingerie giant from a public company under L
by Eliza Huber
Deals
The North Face Winter Sale Arrived Just In Time
by Sri Rain Stewart
Sales
This Major Loft Sale Will Improve Your Wardrobe And Your Mood
by Amanda Randone
Discover
R29 Stories & News
Watch
R29 Original Series & Films
Shop
R29's Most Wanted