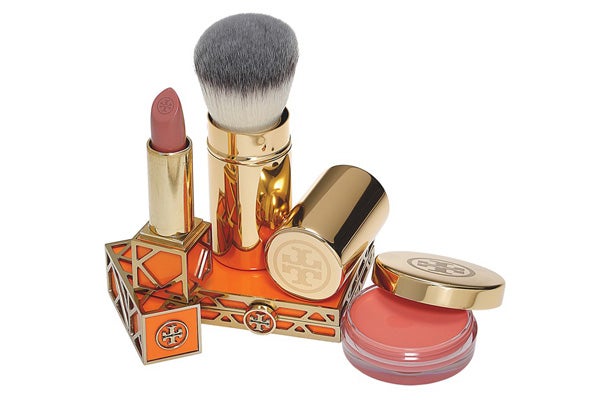 Photo: Via WWD
Tory Burch has officially made her leap into the beauty world — and from the looks of her first makeup, body, and fragrance creations, we're predicting a major hit. As she told WWD in an exclusive feature debuting today, Burch admits that she was inspired by the people closest to her while designing the collection — her family. While developing her eponymous fragrance, for example, she started with a single note — vetiver — that was beloved both by her brothers and by her late father, and used the note as a jumping-off point in developing a sexy-tomboy fragrance that would eventually include notes of pink pepper, neroli, and tuberose.
When it came to the development of her color cosmetics capsule collection — a simple selection of nude lipstick, a cheek and lip tint, a bronzing palette, and a retractable face brush, Burch incorporated both her father's witticisms (the lipstick's name, "Pas du Tout," was a favorite phrase of his) and her mother's pared-down chic approach to beauty. Says the designer: "Less is more. My mom, who’s in her late 70s, when she doesn’t wear makeup or just a little bit, she looks so beautiful.”

Burch's beauty line (which also features a bath and body collection, complete with a scented candle), will be available for pre-sale starting on September 6th, with a planned launch on the 26th at Bloomingdale's, Holt Renfrew, Tory Burch boutiques, and the designer's own website. We can't wait to get our hands (and noses) on Burch's latest offerings, and we look forward to seeing that fabulous orange-and-gold packaging in our makeup bags — simply gorgeous, no?
(WWD)

Beauty
We've Tried Every Beauty Product By Glossier — Here's What's Wort...
by Us
Makeup
All The New Drugstore Makeup To Add To Your Stash In 2021
by aimee simeon
Beauty
5 Incredible Makeup Looks To Rock To Your New Year’s Eve Zoom Party
From festivals to birthdays, the coronavirus pandemic has robbed us of many enjoyable moments in 2020 — and now that includes New Year’s Eve. While
by Jacqueline Kilikita
Makeup
It’s The Eyeliner For Me: 13 Anything-But-Boring Ways To We...
by Sydney Clarke
Beauty
For This Model-Turned-Makeup Entrepreneur, Prayer Is Her Power So...
After doing her own makeup backstage for years, fashion model Kim Baker decided to pursue her passion and become a full-time celebrity makeup artist. When
by R29 Editors
Makeup
Our Editors Reveal Their Favorite Liquid Foundations Of All Time
by Thatiana Diaz
Eye Makeup
6 White Eyeliners That Will Instantly Upgrade Your Classic Cat Eye
by Karina Hoshikawa
Celebrity Beauty
31 Makeup Looks To Liven Up Your Zoom Holiday Party
by aimee simeon
Makeup
The 13 Best Red Lipsticks You Can Find At The Drugstore
by Karina Hoshikawa
Beauty
The Best Mascaras Of 2020 — Including This $5 Winner
by Sydney Clarke
Beauty
11 Concealers Our Editors Swear By
by Us
Makeup
The Best Red Lipsticks Money Can Buy, According To The Pros
by aimee simeon
Discover
R29 Stories & News
Watch
R29 Original Series & Films
Shop
R29's Most Wanted