Skip navigation!
Story from Designers
It's obvious enough that fast fashion brands like H&M, Zara, and Topshop — as much as we often depend on them to fill out our wardrobes — have the power to cut a serious chunk out of the profits of traditionally untouchable luxury names. With cheaper (and often questionable) labor, massive support systems, and dependably profitable distribution networks, more budget-friendly retailers can seize market opportunities that high-fashion houses miss. But, of course, this isn't new news — not to us, and not to the executives running those giants and struggling to maintain profitability without sacrificing status. Luxury brands are taking serious measures to keep up, as Suzy Menkes explores in this fascinating piece for T, and that means changing the fundamental innerworkings of the design process.
Advertisement
Meaning, more shows and less lead time for designs, as well as an increased focus on resort collections, which, Menkes says, can account for up to three-quarters of annual profits. All told, some brands are aiming to put on around ten shows a year — the usual ready-to-wear collections, plus resort, couture, menswear, pre-fall, promotional shows, and often a few catered just towards extremely wealthy client bases in Asia, Dubai, Moscow, and Brazil. Of course, this takes its toll on the designers. Though there are probably a million reasons that went into the tragic suicide of Alexander McQueen, or the very-public breakdown of John Galliano, Menkes isn't wrong to suppose that the increasingly stressful production cycle — which treats designers more like lab rats than vital individuals with endless creative license — played its part. There is less and less time for the things that often give way to the best collections: Wild and randomly-sourced inspiration and brainstorming, or just running with a crazy hunch.
For our part, we'd argue that it's not more, more, more that will save luxury; it's maintaining exclusivity, mystique, and a certain craziness of design that simply can't be copied. H&M is never going to come out with, for example, a carbon-copy McQueen gown, because there are only a handful of people in the world who would dare to wear such a thing. As the aforementioned emerging markets continue to grow and look for something that will justify "new money" with taste and elite access, there's a good chance that the intersection of the people who will wear the more high-concept designs and the people who can afford to do so will only get bigger. (T Magazine) 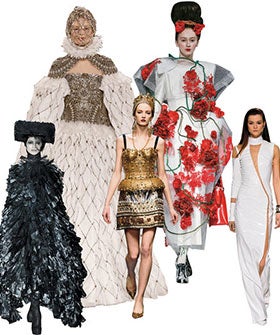 Image: Via T Magazine.
Style
Costume Institute’s New Exhibit Highlights American Fashion’s Ove...
What is American fashion? A little less than a year ago, the Metropolitan Museum of Art’s Costume Institute began to answer this question with the “In
by Irina Grechko
Best Wedding Dresses
Meet The Bridal Designers Behind Some Of Today’s Coolest We...
Welcome to Aisle Style, a week-long series that features the most untraditional wedding fashion trends, bridal designers behind the coolest wedding lo
by Fawnia Soo Hoo
Designer Collaborations
Iris Apfel x H&M Is Here — Here’s How The Style Icon Wants You To...
by Irina Grechko
Advertisement
Designers
Alexander McQueen Returned To NYC After 20 Years With A Nature-In...
There was a lot of talk about mushrooms ahead of the Alexander McQueen Fall 2022 fashion show. As soon as teasers began to quite literally sprout in the fo
by Irina Grechko
Black History Month 2022
Ruth E. Carter Is Black History, Present, And Future
R29Unbothered continues its look at Black culture’s tangled history of Black identity, style, and contributions to the culture with ROOTS, our annual Bla
by Venesa Coger
Adidas
Gucci’s Latest Collection Includes A Collab With Adidas
After months of rumors, Gucci confirmed that it’s partnering with Adidas with the release of the brand’s fall 2022 collection during Milan Fashion Week
by Frances Solá-Sant...
Designers
Y2K Fashion Defined 2021 — 10 Brands That Led The Charge
by Shelby Ying Hyde
Designers
Virgil Abloh Is A Reminder That Fashion’s Most Prolific Designers...
Barrier-breaking designer. Genre-bending artist. Visionary. These are some of the ways people have described Virgil Abloh after it was announced that the 4
by Irina Grechko
Unbothered
Anifa Mvuemba Took Over D.C. With Hanifa’s First Runway Show & Sh...
Designer Anifa Mvuemba is known for her beloved brand, Hanifa, which is full of vibrant and bold colored designs. On Tuesday (Nov 16), she debuted her firs
by Venesa Coger
Designers
Bottega Veneta Green Was Fashion’s Favorite Color. What Hap...
It was the color of the year — at least, it was for fashion types. Few cared about Pantone’s gray and yellow when there was “Bottega Veneta green”
by Katy Kelleher
Designers
Step Inside Susan Alexandra’s Store, A New York Fairytale Come To...
“We wanted it to look like a fairy godmother took her wand and enchanted everything,” says Susan Korn, the creative director and owner of Susan Alexand
by Irina Grechko
Designers
Gucci Writes A Love Letter To Hollywood With A Little Help From S...
When it was revealed that Gucci would be closing down L.A.’s Hollywood Boulevard for its Spring 2022 show — the brand’s first in-person show in almos
by Irina Grechko
Advertisement
Advertisement
Discover
R29 Stories & News
Watch
R29 Original Series & Films
Shop
R29's Most Wanted