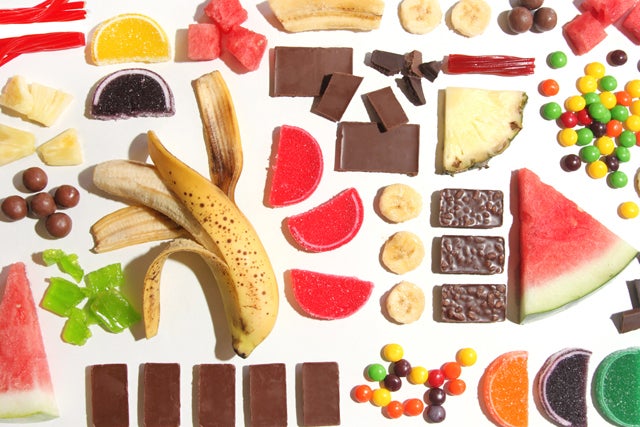 photographed by christy kurtz.
A new study on the effect of sugar in mice has us reconsidering the way we eat, in a serious way. As reported by the Huffington Post, mice were fed a daily diet of 25% extra sugar (which equals a healthy human diet with three added cans of soda). The results were shocking: The female mice were twice as likely to die and had fewer baby mice than those not on the extra-sugar diet. "After 32 weeks in mouse barns, 35 percent of the females fed extra sugar died, twice the 17 percent death rate for female control mice," to be specific. Did you read that? Twice as likely to die. Not twice as likely to go up a size in mice pants. Death.
Rest in peace, little mice, we hardly knew ye — but what we now know has us rethinking our entire "everything in moderation" outlook on life. If 25% extra sugar (refined sugar, not the natural fruits and veggies kind) causes these results in mice, what about our own sugar-coated intestines? Wayne Potts, the study's senior author, noted that what happened to the mice is super-relevant: "Our results provide evidence that added sugar consumed at concentrations currently considered safe exerts dramatic adverse impacts on mammalian health." Well, yikes.
According to Potts, as much as twenty-five percent of Americans might be consuming as much sugar as the mice in the study. Think you might be one of them? Though we don't know exactly what this level of sugar does to us, now seems like a good time to start cutting back, just in case. We wouldn't want those mice to have died in vain. (Huffington Post)
Fertility Diaries
I’m 33 & Have ‘Unexplained Infertility,’ But I’...
Welcome to Refinery29’s Fertility Diaries, where people chronicle their joyous, painful, and sometimes complicated paths to parenthood. History: My husba
by Refinery29
Horoscope
Everything To Know About The Air Signs: Gemini, Libra, & Aquarius
Perhaps one thing that all air signs have in common is the confusing nature of their symbols. Libra is represented by scales, an instrument that measures w
by Gala Mukomolova
Most Wanted
R29 Readers’ 12 Most-Wanted Sex Toys Are Orgasmically Good
Sex toys always have us a-buzz. From a little extra pleasure with your S.O. to a full-stop solo show, there’s a toy for your every mood. And no one k
by Mercedes Viera
Advertisement
Books & Art
These Intimate Portraits Show The Reality Of Living With OCD
Obsessive compulsive disorder (OCD) is a largely invisible mental illness. To those who have never experienced it in themselves or loved ones, it may seem
by Sadhbh O'Sullivan
Horoscope
Mercury In Retrograde Is Over For 2021. Here’s What Happens...
For the past month, Mercury retrograde in Libra has been wreaking havoc on us, stirring up drama in our relationships, messing with our technology, and dis
by Elizabeth Gulino
Amazon
People Can’t Get Enough Of This Bestselling Vaccine Card Pr...
This just in: Fall’s hottest accessory isn’t a new bag or a cool pair of chunky loafers, but rather, a holder for your COVID vaccine card. That
by Karina Hoshikawa
Wellness
What Does It Really Mean To Be A Bottom?
I remember a Tumblr post that changed my view of vaginas forever, as Tumblr posts are wont to do when you’re 16 years old and on the family computer late
by Gina Tonic
Single Files
My Breakup TikToks Went Viral & Then Everything Changed
I never considered myself to be someone who would put my happiness in someone else’s hands. I’ve always been very independent; I value my space and put
by Amelia Samson
Relationships
Scheduling Sex Felt Strange & Vulnerable — It Also Helped My Rela...
Whenever I need to find the time to do something that matters in my life, from exercise to writing to keeping up with friends, I always check my schedule a
by Anne H. Putnam
Horoscope
Your Horoscope This Week: October 10, 2021
by Gala Mukomolova
Sex
California’s New Law Makes “Stealthing” A Civil...
Earlier this month, the California legislature unanimously passed a law that would make it illegal for someone to remove a condom during sex without their
by Alexandra Brodsky
Wellness
Why Is ‘Weaponized Incompetence’ Blowing Up On TikTok...
“I’ll just do it myself” is a phrase that has escaped my mouth many a time, often uttered with a sigh. I know I’m not alone in my willingness to ta
by Maggie Zhou
Advertisement
Advertisement
Discover
R29 Stories & News
Watch
R29 Original Series & Films
Shop
R29's Most Wanted