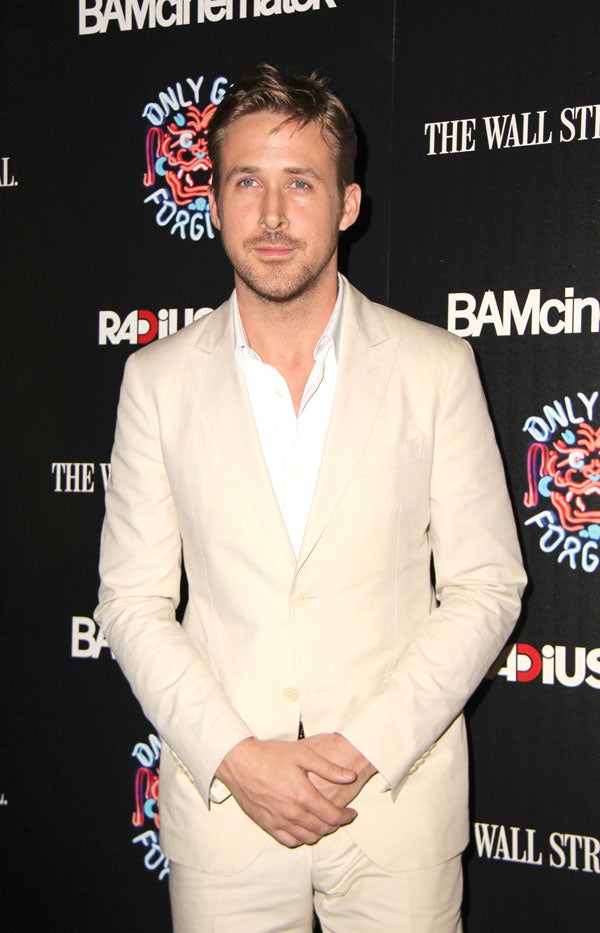 Photo: Carolyn Contino/BEImages
So, guess what? Ryan Gosling is pretty weird. Yes, he may have the title of de facto hunk of the millennial generation, but in reality, he is just a huge film nerd who is still trying to struggle with his own appeal. (Maybe that's why we love him so much? Because of his low-key, easy-going vibe?) Yet, the RyGos that started ladies swooning in The Notebook and Lars And The Real Girl seems to have stepped aside to a harder, edgier Gosling — let's call him the Winding Refn Gosling.
Because when Gosling teams up with the Danish director (who was also responsible for turning Tom Hardy into a murderous, beefy inmate for Bronson), he gets cruel. First, he was the nameless assassin in Drive, and now, he plays the drug-smuggler with major mommy issues in Only God Forgives, a movie that (eek!) has no problem with turning Ryan's face into hamburger meat. Which he liked, because he enjoys how intense the visceral reaction an audience has whilst experiencing on-screen violence.
Advertisement
While this may mean that the days of "feminist Ryan Gosling" are over, he has faith in us, as his fans, to keep creating the insane viral memes he seems to inspire. And don't worry; we won't let him down.

Gosling: “Yeah, Nick [Winding Refn] and I had a history, and obviously some trust. He works chronologically, so there’s never a true sense of what kind of movie you’re making. He’s discovering it just as much as the actors are. He’s along for the ride. This film was different from Drive — there’s a lot of silence — but in Drive I was the Driver, and in this film, I’m more of the actual vehicle for the audience to experience the story. I did feel a difference between the two characters.”

Ryan, you get pretty beat up in this movie — to the point of almost being unrecognizable. Was that something that appealed to you? Were you into breaking away from the pretty-boy look?

Gosling: “Well, that wasn’t originally in the script. Again, with Nicolas working chronologically, things come up. Being trained by these stunt coordinators, it felt foolish to not stay true to the culture of fighting.”

You’ve recently been attracted to incredibly violent, but incredibly stylish movies where crime and pain aren’t exactly glorified, but they look, well, cool. Do you still think there’s room for the 'Hey Girl' Ryan Gosling kind of movies, or are you deliberately leaving it? How are we going to keep making memes of you?

“You all seem to find a way, so I’m not worried about that. Well, I thought I never made a violent film until Murder By Numbers was brought back to my attention. It wasn’t something that was really interesting to me. I wanted to work with Nicolas, and Drive became more violent once he came on board. It’s a part of who he is. It’s only been the last couple of years that I’ve been experimenting with these kinds of roles. The reaction has been strange — much stranger than anything I’ve ever done before. For instance, when we did Drive, we were at Cannes. When Christina Hendricks gets her head blown off, everyone cheered. People were so happy about it, and excited. They started stomping their feet and clapping. It was the most bizarre reaction I could imagine. I’m learning the genre. I don’t understand the reaction, but there’s a real hunger for this kind of film.”

Do you ever worry about alienating your fans?

“I don’t think you can really think like that. That’s a dangerous road to go down. I feel very lucky to have been able to work with Nicolas because he makes films from a very personal place. That’s not always the case in Hollywood. It’s nice to be around that, where someone’s life is all about the movie. It’s an interesting way to work. It’s been a good experience, and I feel like I’ve learned a lot from it.”

When the film premiered at Cannes, there were reports that when you were little, you loved movies so much, you would put them in your pants. Can you speak a little to that?

“Do you really want to know about this? Yeah, I saw Rambo when I was twelve, and brought knives to school and threw them at kids. So, my mother made me stop watching R-rated films. I got my hands on Blue Velvet, and in order to sneak it by her, I stuck it down my pants. The idea that I had a movie I couldn’t show anyone, and had to hide in my pants, felt good. It made an impression on me. Something in me clicked, and I knew I wanted to make something like that one day.”

Were you a Blue Velvet fan?

“Yeah, I liked it. Obviously. I put it in my pants, I liked it so much — yeah, I should stop talking.”

Only God Forgives is currently in theaters.
Unbothered
Megan Thee Stallion’s Bombshell New Interview Reveals Devastating...
In July 2020, Megan thee Stallion was involved in an intense police stop after attending a celebrity pool party in Los Angeles, leading to the shocking rev
by Ineye Komonibo
Unbothered
Ari Lennox Shares An Update After Her Amsterdam Arrest
Updated December 2, 2019: Days after being detained at Schiphol Airport in the Netherlands, Ari Lennox has resurfaced on social media to give worried frien
by Ineye Komonibo
Unbothered
Two Men Convicted For The 1965 Assassination Of Malcolm X Have Be...
Nearly 60 years after the shocking assassination of civil rights leader Malcolm X, a new development in the investigation into his murder has led to t
by Ineye Komonibo
Advertisement
Unbothered
The Zombification of Whitney Houston
In Haitian mythology, the idea of what we now call zombies emerged from enslaved Africans’ deepest fear: not even death would bring freedom. Though suici
by Brooke Obie
Unbothered
Actually, Netflix, Content Like Dave Chappelle’s Transphobic Come...
Update: Netflix has fired the employee who was organizing an upcoming walkout (set to happen Wednesday, October 20) of trans staffers and allies in protest
by Kathleen Newman-B...
Unbothered
Years After Her Death, The Science Community Is Still Treating He...
In the 1950s, a Black woman named Henrietta Lacks walked into Johns Hopkins Hospital to be treated for cervical cancer, and her cells would go on to b
by Ineye Komonibo
Somos Libres
Why Black Puerto Rican Women Are Leading an Anti-Racist Media Ren...
While the 2020 Census was essential to many communities across the United States, it held a different meaning for Puerto Ricans. Battered after a decades-l
by Frances Solá-Sant...
Unbothered
R. Kelly Facing Life In Prison After Being Found Guilty Of Racket...
This story contains discussion of sexual violence. Please proceed with care. Updated September 27, 2021: Months after being charged and indicted for nine g
by Ineye Komonibo
Unbothered
Jennifer Hough’s First On-Air Interview About Nicki Minaj &...
*Editor’s note: this story contains discussions about sexual violence, threats, and intimidation. Please read with care.  A month after publicly all
by R29 Unbothered
Unbothered
CBS Will Now Turn Its Controversial Activist Competition Series I...
Updated September 16, 2021: After a wave of backlash followed the announcement of its controversial new series, CBS is going back to the drawing board to r
by DarkSkyLady
Unbothered
Megan Thee Stallion Wins Two Big Legal Victories — Against Her La...
Megan Thee Stallion scored two major legal wins this week, after a judge granted her the go-ahead to release the remix of BTS’ Butter that she is feature
by Tayo Bero
Unbothered
American Idol Alum Syesha Mercado Is Still In The Midst Of...
Singer and American Idol alum Syesha Mercado has regained custody of one of her two young children who were taken from her by authorities in Florida. Merc
by Tayo Bero
Advertisement
Advertisement
Discover
R29 Stories & News
Watch
R29 Original Series & Films
Shop
R29's Most Wanted