Story from Designers
It's been over five years since the fashion industry received its last big wakeup call on the issue of diversity — bookmarked by a biting article in Vogue titled "Is Fashion Racist?" — but, for all intents and purposes, almost nothing has changed. The optimistic side of us likes to think that our society as a whole has made strides (although there's always more work to be done when it comes to racial equality), but our favorite designers seem to be light years behind the curve, to a disheartening degree.
Take the New York shows, for example: This past February, black models accounted for a staggeringly low six percent of looks shown — 82.7 percent were shown on white models. And, even worse, several shows in Europe featured no black models at all (Céline and Dior included). Some of the most influential black models on the scene today report that they struggle more for roles than their white counterparts, being turned down for reasons like "We already have our black girl."
Advertisement
Of course, that's not to say that everyone in the fashion industry turns a blind eye to these upsetting inequalities. Many, including Iman, W's Edward Enninful, and casting director James Scully, are working to enact change — but, they say none will come about unless drastic measures are taken. "It feels to me like the times need a real hard line drawn like in the 1960s, by saying if you don’t use black models, then we boycott," said Iman. "If you engage the social media, trust me, it will hurt them in their pockets. If you take it out there, they will feel the uproar." Several key players are planning to participate in a campaign during September's upcoming Fashion Week, which will directly target designers who fail to use black models, and enlighten consumers to the civil rights issues that are still plaguing the industry.
As much as we'd like it to, change will unfortunately not come overnight. Many experts believe that in addition to calling for more diversity within model casting, the industry needs non-white representation all over the board — from design teams to merchandisers and publicists — in order to instill an improved attitude. "Change always takes time," said Edward Enninful. "The fashion industry needs to breed a whole different way of thinking." There are rumors that designers and creative directors are already beginning to respond to the negative press and possible boycotts — you can bet that, come September, we'll be keeping a closer eye than ever. (The New York Times) 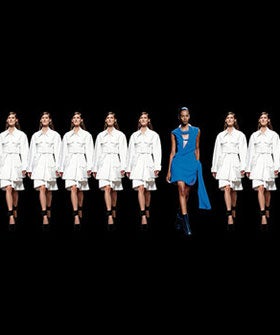 Photo: Via The New York Times
Style
Rihanna Takes A Virtual Vacation In The New Savage x Fenty Campaign
If it weren’t for the pandemic, you’d likely be packing up a weekender bag right now in preparation for the upcoming holiday. Long weekend or not, vaca
by Eliza Huber
Style
Gap Is Not Moving Forward With The Telfar Collaboration
Update: Gap is not going ahead with the Telfar collaboration “at this time.” Following the announcement of the forthcoming Kanye West x Gap line, socia
by Sara Radin
Style
This Cult-Favorite Destination For Dresses Launched A Bridal Line
by Irina Grechko
Style
8 Queer Brands That Make Suits For Women
by Irina Grechko
Style
11 Honoré Launched Its Own Plus-Size Line
by Irina Grechko
Style
Burberry Announced An “Immersive Show Experience” For All In Sept...
Burberry is going ahead with a runway show this September — though it won’t be like those of years past. The presentation of the Spring/Summer 2021 col
by Irina Grechko
Style
LaQuan Smith’s Collab With Revolve Is Perfect For Your Next House...
by Eliza Huber
Designers
Beloved New York Label Sies Marjan Shuts Down Amidst COVID-19
On Monday evening, New York brand Sies Marjan announced that it will be closing its doors after five years in business as a result of the Covid-19 pandemic
by Irina Grechko
Style
Jane Fonda, King Princess, & Lil Nas X Go Off The Grid For Gucci’...
Gucci is known for its productions. The Italian luxury brand’s use of 3-D printed severed heads and Game of Thrones-esque dragons are proof enough of tha
by Eliza Huber
Style
50 Jewelry Brands Teamed Up To Support Young Black Designers
Jewelry showroom For Future Reference announced on Thursday the creation of an endowment with New York City-based jewelry designer Brent Neale Winston. Nam
by Eliza Huber
Style
Givenchy Taps Matthew Williams To Replace Clare Waight Keller As ...
French fashion label Givenchy announced on Monday morning that Matthew Williams, the founder of luxury streetwear label 1017 ALYX 9SM, will be the house’
by Eliza Huber
Style
49 Black-Owned Fashion Businesses To Support
by Eliza Huber
Discover
R29 Stories & News
Watch
R29 Original Series & Films
Shop
R29's Most Wanted