Skip navigation!
Story from Entertainment
N00bs of the world may think that memes are purely a creation of the Internet. But any seasoned vet knows that's far from the truth. The word itself was first coined by Richard Dawkins in The Selfish Gene back in 1976, and the idea of a cultural unit that spread like wildfire is as old as communication itself. But our beloved series of tubes has made it all a lot more accessible and share-able — and it lets us look back on the history of these radar-blips in pop culture, commanding an entire archive of hilarity at our fingertips. Of course, there's a lot to be said. Volumes, in fact. But we condensed it down to the best of the best, from the OG moments you never knew were memes to the Interweb classics we know and love today.
Advertisement 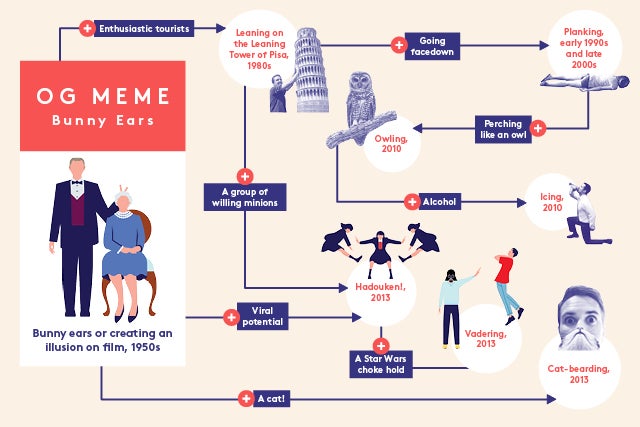 Illustrated by Ben Wiseman and Ammiel Mendoza.
Photo manipulation is always fun, whether you're living in the Instagram age or enjoying the world's first Polaroid. 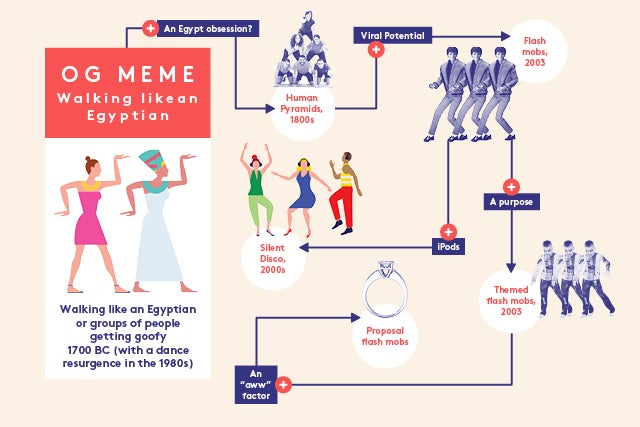 Illustrated by Ben Wiseman and Ammiel Mendoza.
People have been embarrassing (and occasionally injuring) themselves and their family members with these kind of group stunts since time immemorial. 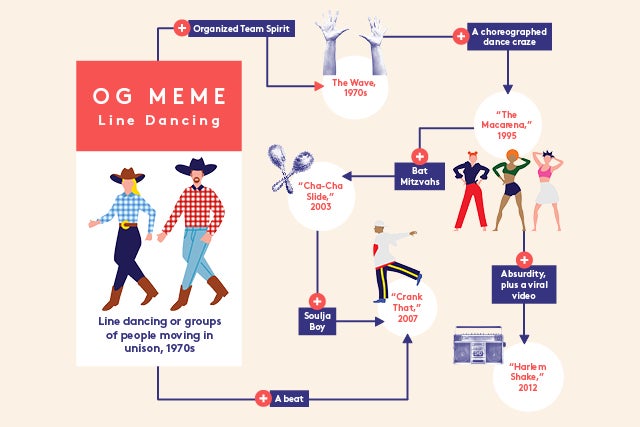 Illustrated by Ben Wiseman and Ammiel Mendoza.
If there's one thing memes can teach us about humanity, it's that when it comes to dancing, we really love to ham it up.
TV Shows
Lily James Is Biting Sebastian Stan’s Nipple In The First P...
A few minutes ago I was debating the merits of going to the IRL bar in New Girl for outdoor happy hour with my best friend (She can’t! She’s busy!). Th
by Ariana Romero
Music
Shrill‘s Season 3 Soundtrack Makes It A Little Harde...
by Shannon Carlin
Movies
Netflix’s Monster Accidentally Says Exactly What It&...
Spoilers are ahead. It isn’t very far into Netflix’s Monster that we hear the titular word. Steve Harmon (Kelvin Harrison Jr.) is a Black 17-year-old l
by Lia Beck
Advertisement
Pop Culture
Aubrey Plaza Just Casually Dropped That She Got Married
Aubrey Plaza subtly dropped the news that she and her longtime partner Jeff Baena have gotten married. In a May 7 Instagram photo of the couple, Plaza snuc
by Natalie Morin
TV Shows
Behold! All The Holes In Jupiter’s Legacy’s Ex...
Spoilers are ahead. TV shows are naturally in the business of keeping you tuned in for more episodes. And the superhero series Jupiter’s Legacy was never
by Martha Sorren
TV Recaps
R29 Recaps: Every Episode Of Netflix’s Jupiter’s L...
What if your overbearing parents were superheroes? That’s the question the new Netflix series Jupiter’s Legacy decided to ask. It’s based on a gr
by Leah Marilla Thomas
TV Shows
Let’s Unravel That Villain Twist In The Jupiter’s Legacy F...
Major spoilers for Jupiter’s Legacy on Netflix are ahead. From the very beginning of Jupiter’s Legacy, something is obviously up with supposed Sampson
by Ariana Romero
TV Shows
Lindy West Walks Us Through Shrill Season 3’s Incredibly P...
Spoilers are ahead. The final season of Shrill doesn’t wait long to deliver a nightmare. In episode 2, Aidy Bryant’s Annie is on a blind date that she
by Kelsea Stahler
Unbothered
Ziwe Brings Her Signature Audacity to Showtime
Audacity. It’s the first word that comes to mind when I think of Ziwe Fumudoh. The comedian is unabashed, unashamed, and bold in her challenges to the st
by Clarkisha Kent
TV Shows
Fans Don’t Know How To Feel About This New K-Pop Competitio...
MGM Television announced on May 6 that it’s partnering with Korea’s SM Entertainment — home to some of the industry’s biggest K-pop acts — to bro
by Natalie Morin
TV Shows
Sanditon Is Finally Coming Back — But Without Its Leadin...
Every television fan knows the feeling of their favorite show ending or being canceled without warning, but how many of us can count ourselves among the lu
by Ineye Komonibo
Blake Lively
Blake Lively Is Putting Her Assassin Hat Back On For A Dangerous ...
In the 2020 action thriller The Rhythm Section, Blake Lively took a walk on the dark side to play an assassin with a deadly score to settle. A moment of d?
by Ineye Komonibo
Advertisement
Advertisement
Discover
R29 Stories & News
Watch
R29 Original Series & Films
Shop
R29's Most Wanted