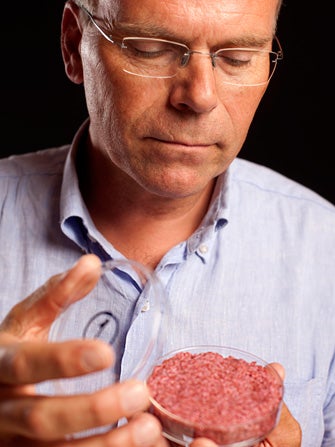 Photo: Courtesy of Maastricht University.
UPDATE: Today, it happened. Two humans — Chicagoan author Josh Schonwald and Austrian food researcher Hanni Rutzler — had the delight of tasting the world's first test-tube burger, and it was...okay. For lunch this afternoon in London, the pair watched the burger being prepared and then tasted it in front of an audience of some 200 people. The cooking time was about the same as that of a regular burger, and as you can see, it looks similar, too. Upon tasting it, Rutzler said she expected it to be a little more juicy, and that while there was a not-unpleasant flavor, it wasn't the same. On the plus side, the texture was more or less what you'd expect from real meat, but because the burger is made only from muscle tissue with no fat, it doesn't have the same level of flavor as the real thing.
Advertisement
Of course, this is a pretty big deal. "Cultured beef" (which, incidentally, should be the name of Kanye's next album) inventor Mark Post says it won't be available in supermarkets for at least 10 years, but if it does become marketable and — fingers crossed — popular, this could mean the solution to many environmental issues and a much, much better future for animal rights. Learn more, if you're interested, here...or just read this gross article about ever-lasting happy meals, instead.
Originally published on July 31: Love a good burger? Us, too. In all its juicy varieties. And yet, we’re not sure we’d spend £250,000 on one.
Yes, you read that correctly. This week, a few lucky diners will experience the culinary delights of a 250K patty and bun. But, this isn’t a burger covered in 24-carat gold or one made from the rarest Kobe beef. Rather, it is the science behind it that gives it the hefty price tag. As this particular burger began life in a test tube.
Heston Blumenthal, eat your heart out. Professor Mark Post, a medical physiologist at Maastricht University in Holland, has spent the past two years working on an “in vitro” burger taken from stem cells which Post believes will benefit the environment. His argument? The stem cells taken from one animal could generate a million times more meat than the actual animal.
He explains, “Right now, we are using 70 percent of all our agricultural capacity to grow meat through livestock. You are going to need alternatives. If we don’t do anything, meat will become a luxury food and will become very expensive. Livestock also contributes a lot to greenhouse gas emissions, more so than our entire transport system.”
The “in vitro” burger will make its debut at a non-disclosed venue in the West End this week and if all goes well, the thought is that artificial meat could potentially go on sale in the next five to ten years. But, is this a step to far? Can you stomach that insane price time? Let us know in the (new and improved) comments below. (The Metro)
Gift Guides
13 Best Wine Gift Baskets, Boxes, & Bottles That Bring The Holida...
by Cortne Bonilla
Deals
Cyber Monday Is The Last Day To Score An Always Pan On Sale
Super Sale Alert: Score the Always Pan for only $99 until midnight TONIGHT. No promo code required. Unlike other popular cookware brands, the Always P
by Alexandra Polk
Most Wanted
30 Oddly Specific Advent Calendars You’ll Want To Gift This...
by Karina Hoshikawa
Advertisement
Shopping
20 Wine Subscription Services That Bring You The Best Bottles
by Elizabeth Buxton
Most Wanted
21 Booze-Free Drinks That Are Perfect To Serve On Thanksgiving
by Olivia Harrison
Food & Drinks
7 Sites That Will Deliver Your Favorite Alcohol ASAP
by Marshall Bright
Food & Drinks
The 25 Best Online Bakeries For Ordering Thanksgiving Treats
by Brianna Arps
Gift Guides
But First, Coffee: 22 Gift Ideas For Bean-Loving Buds
by Cortne Bonilla
Most Wanted
Boxes Of Holiday Chocolate Gifts That Are Almost Too Sweet...
by Alexandra Polk
Home
Here’s Where To Buy The Best Holiday Gift Baskets This Year
The bunnies have Easter baskets, Yogi Bear has picnic baskets, which means we’re giving the holidays full jurisdiction over gift baskets (and a few b
by Alexandra Polk
Dedicated Feature
Welcome To Supper Club Season: Here’s What Your Tablescape ...
by Eliza Dumais
Most Wanted
The Japanese Snack Subscription Box That Gives Me A Taste Of Home
As sad as it is to admit, I used to feel that being Japanese made me kind of uncool. My go-to lunches of (delicious) grilled salmon bentos and (also delici
by Karina Hoshikawa
Advertisement
Advertisement
Discover
R29 Stories & News
Watch
R29 Original Series & Films
Shop
R29's Most Wanted