Skip navigation!
Story from Celebrity Beauty
So...you know how after a celebrity gives birth, there's all kinds of pressure to show up on a magazine cover looking "perfect"? And, how that's a totally unrealistic expectation for any woman? In a rare but welcome change, Redbook's September cover features a glowing, content Kristen Bell just 11 weeks after giving birth to her daughter, Lincoln — and the cover lines aren't crowing about how she "got her pre-baby body back!"
In the cover story, Bell says she's about fifteen pounds heavier than her pre-pregnancy weight, and you know what? She seems cool with that. "I’m going to continue working out and see where it goes," she tells the magazine. "I’d like to get back down to where I was before the baby… but if this is where my body wants to be, so be it. I’m not going to make myself miserable for the rest of my life trying to get back to where I was before.” Bra-vo.
Advertisement
Bell isn't the only one who's owning up — Jill Herzig, the magazine's editor-in-chief, confesses to the Huffington Post that she, too, has perpetuated the race-to-lose-the-baby-weight frenzy. In a refreshingly candid quote, Herzig writes, "As the editor of Redbook, I'll admit I've sometimes been part of the problem." Kudos to Herzig for stepping up and changing the conversation by putting the real Kristen Bell on the cover.
We're already fans of Bell, but her body acceptance sets the tone for other women, and that makes us like her that much more. We applaud the new standard that Herzig is working to set, too. Here's hoping this becomes a trend. (The Cut).

Photo: Via The Cut
. 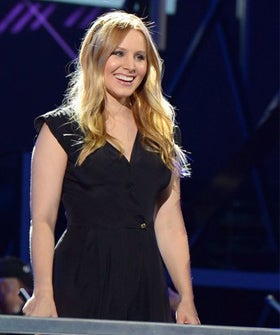 Advertisement
Celebrity Beauty
Billie Eilish’s Technicolor Hair Evolution Deserves Its Own...
by Thatiana Diaz
Grammy Awards
15 Grammys Hairstyles We Could Never Forget
by Thatiana Diaz
Celebrity Beauty
Serena Williams Is Wearing The Cutest Nail Art For A Cause
In the wake of the recent bushfires burning across Australia and into New Zealand, Serena Williams has made it her mission to use her celebrity platform to
by Megan Decker
Celebrity Beauty
Vanessa Hudgens Just Debuted A Dainty New Sideboob Tattoo
Big breakups are often followed by a period of self-discovery that goes hand-in-hand with beauty changes — and that applies to celebrities, too. Since re
by Megan Decker
Celebrity Beauty
NikkieTutorials Reveals How She Was Blackmailed Before Her “...
Last week, in an emotional video titled “I’m Coming Out” that has since garnered over 32 million views, beauty vlogger Nikkie de Jager ?
by Thatiana Diaz
Beauty
Charlize Theron Says Getting That Diamond Bracelet Out Of Her Hai...
Update: After sharing that she wore a $15,000 Tiffany & Co. bracelet to cover her grown-in roots, Charlize Theron followed up her SAG Awards appearance
by aimee simeon
Nails
Millie Bobby Brown’s Manicure At The SAG Awards Was An Early 2000...
Millie Bobby Brown served up a major beauty moment at Sunday night’s Screen Actors Guild Awards, with a simple touch that was so unexpected and chic it w
by Tanya Edwards
Beauty
Scarlett Johansson’s Sleek SAG Awards Updo Shows Off Her Ma...
Scarlett Johansson, who is nominated for three honors at tonight’s Screen Actor’s Guild Awards, stole the show with her stunning red-carpet bea
by aimee simeon
Beauty
The Most Standout Red-Carpet Hairstyles In SAG Awards History
by aimee simeon
Beauty
Kylie Jenner’s Stormi Palette Is Cute Enough To Give You Butterflies
by Shannon Carlin
Beauty
NikkieTutorials Got A Symbolic Manicure Following Her Powerful Co...
It’s been a major week for YouTuber and makeup artist Nikkie De Jager, better known as NikkieTutorials. On Monday, the makeup artist and influencer relea
by aimee simeon
Celebrity Beauty
How Justine Skye Went From Tumblr Trendsetter To IRL Icon
The singer brings her unique beauty sensibility and Jamaican roots to a new collection with The Lip Bar.
by aimee simeon
Discover
R29 Stories & News
Watch
R29 Original Series & Films
Shop
R29's Most Wanted