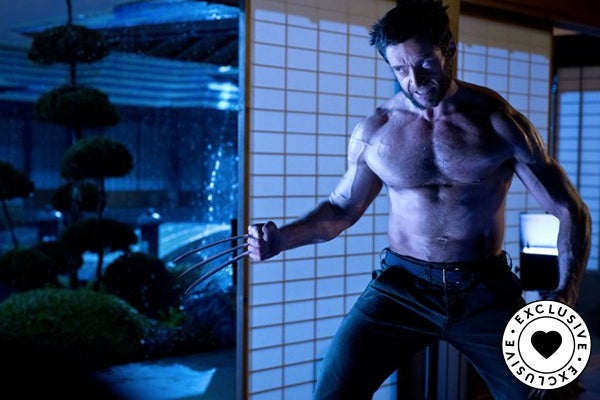 Hugh Jackman might look tough, but scratch a little beneath that chiseled surface and you'll find he's quite the softie. The Australian actor is reprising his role as the Wolverine this summer, which is a bit of a reversal from Jean Valjean. But, when you're belting out live show tunes for hours, a couple of stunts seems like a cakewalk.
For lack of a better term, Jackman is a Jack-of-all-trades. He has the ability to seamlessly go from Broadway to Hollywood at the drop of a hat. One might think he would carry around a sense of entitlement, but we learned he's just the opposite — he's a father who hails his kid's opinions over any Roger Ebert critique, and is shameless about his lack of knowledge when it comes to comic books. In a word, he's humble. He's well aware of himself, and thankfully, he knows he hasn't reached his limit. We can expect to see Jackman and his biceps for many years to come.
Advertisement

“When I was younger, I was very sort of angry. I'm surprised I wasn't into X-Men because when I was younger, I would have totally related to it. I guess I just wasn’t exposed to it. I never knew it existed. I felt totally misunderstood, I felt totally different, I was very angry. Let's just say all those things did not make for a nice rugby player.”

Is that because of your family history?

“I’m sure that played a role, but just being a teenager in general fueled it. I had a very explosive temper when I was younger, but I don’t so much anymore. I tapped into that for the Wolverine.”

What did you take away from Wolverine?

“I think he’s got a really great stillness about him. I'm probably more and more grounded in a way — I think I got that from him, I'm not sure. I am better at martial arts than I used to be, and I'm way better at fighting. Oh, and I can raise my eyebrow better than I used to.”

How did the comic books help influence your character?

“Let me tell you an embarrassing story: I had three weeks to prepare before we started filming. I got cast and then I was on camera three weeks later. I had never heard of an animal called a wolverine. I was driving past the Imax, and they were playing this massive Imax movie about wolves, and I was like, ‘Oh wolves, I'll go and check it out as some kind of research for Wolverine. I told the director, ‘Yeah, man, I looked at this thing.’ And he goes, ‘What do you mean you have been studying wolves? You are not a wolf-man. You're a Wolverine. It’s a real animal that's about this big, and if you look like a wolf, you'll be ridiculous.’ He told me to let it go after I spent three weeks researching wolves in a documentary.”

Are your kids fans of the comics?

“My son doesn’t read it or anything, but his friends do. When I saw the movie a few days ago at seven o’clock in the morning, I told him: ‘Listen, I have to see the movie. If you want to come, man, you’ve got to be up a quarter past six,’ presuming my thirteen year old would go — like he somehow would wakeup before me. You know what? He was awake, he came, and he loved it. He said to me that night, ‘Awesome.’ That’s the only time he's ever really congratulated me or gave me a compliment on anything. It was the best review I have ever had in my life."

What about your daughter?

“Oh, my daughter loves it, too. She saw a little bit of the last one on DVD, but she was just turning five, and was really worried for me. This time around, she would come on set, and I showed her the makeup and arrows sticking out of me just to clear the confusion. She thinks it funny now.”

Do you think they'll ever follow in their father's footsteps and become actors?

“I can see them becoming actors — both of them actually. Neither of them have said they wanted to do it, which is just fine with me right now. I love what I do. I love acting, and my career. If that was what they wanted, I would let them. But not until they've left school. I have seen too many train wrecks of actors to know how important an education is. Act at school, go do other things, and when you're 18, do whatever you want.”

How much longer do you think you'll be playing Wolverine?

“The bastard never ages, and here I am aging! I have limits. I don't think I know what my limit is. I just know that it will become clear to me at some point, and if it’s not clear to me, it will become clear to the other fans, or the studio when it’s time to move on. I am surprised as much as anyone that I'm loving it as much as I am — maybe more than any one realizes. I'm really enjoying it. I'm really still proud to play him. So we'll see. I'm not ready to give it up just yet.”