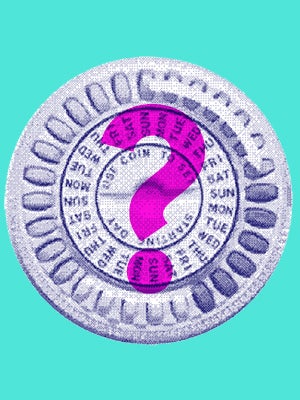 The birth control pill is one of the most groundbreaking drugs to be introduced in the past 50 years. It served as a player in the sexual revolution — giving women sexual freedom and allowing us to pull in the reins on family planning. And, when introduced, it was viewed as a tool with the potential to wipe out poverty and save marriages, in addition to preventing unwanted pregnancy, according to historian Elaine Tyler May, author of America and The Pill: A History of Promise, Peril, and Liberation.
While it may not have eliminated poverty, per se, it has become the undisputed queen the birth control scene: Just five years after being introduced in 1960, it became the most popular form of birth control in the U.S., with more than 6.5 million women opting for the drug. And, its popularity hasn’t waned.
Advertisement
Today, it still rules as the most popular form of birth control for women who use contraceptives, accounting for about 30% of all adult birth control users. That figure has remained steady since 1982, according to the Centers for Disease Control And Prevention.
But, its popularity isn’t completely owed to the drug’s pregnancy-preventing abilities. More than half of pill users cite additional benefits (such as relief from heavy periods, cramps, and acne) as reasons that they choose the pill over other forms of birth control, according to research by the Guttmacher Institute. And, according to the group, 1.5 million women, or 14% of oral contraceptive users, say that unwanted pregnancy has nothing to do with why they take the pill; they take the one-a-day for reasons exclusively other than reproductive effects.
Which isn’t to say that the drug boasts a totally clean record. Over the years, a bevy of health concerns has been raised, most notably when the book The Doctor’s Case Against the Pill was published in 1969. It revealed health risks such as blood clots, heart attack, stroke, loss of libido, depression, and weight gain for women who took the pill.
Though a lower-dose pill was introduced in 1988, one that the Food And Drug Administration lauded as a formula that can lower risk of ovarian cancer, iron deficiency, and anemia, it’s been a while since we looked at the pill with fresh eyes. With that in mind, we spoke with a few reproductive health researchers and practitioners to uncover some little-talked-about benefits and drawbacks of taking the pill — the kind of intel that often gets glossed over in 15 minute OB/GYN visits. Here’s what we found.
Advertisement 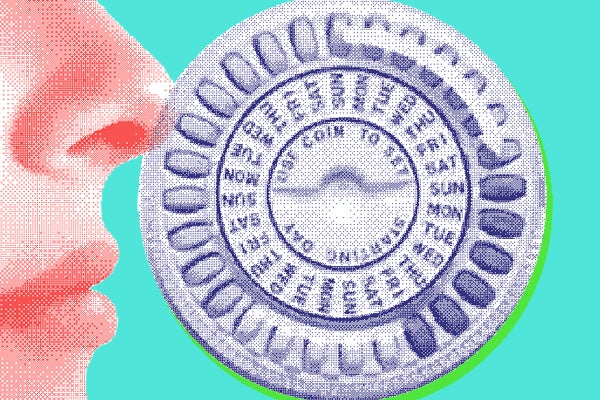 It Can Weaken Your Sense of Smell.
A University of Catania study found that women who did not take the pill had the most sensitive sense of smell around the time of ovulation. But, after just three months of going on the pill, women showed no increased sense of smell at the time they were most fertile. This may seem inconsequential at first (if not a good thing for those who live with the environmental stink of urban, industrial, and agricultural areas). But, when we think about how smell is tied in with sexual desire, the effects are alarming. Jill Blakeway, a renowned New York-based acupuncturist and author of Sex Again: Recharging Your Libido, says that this could potentially lead us to pick the wrong mate. Indeed, another study by the University of New Mexico showed that when women were on the pill and most fertile, they showed no particular preference of the smell of men with symmetrical features vs. asymmetrical features, while those not on the pill clearly chose the scent of men with symmetrical features.
The Pill Lowers Risk of Certain Cancers.
Researchers at Duke University recently pooled data from 24 studies to further confirm what the FDA declared in 1988: Those who use the pill are 27% less likely to develop ovarian cancer, and the longer a woman uses the pill, the more protection she is likely to receive from ovarian cancer. Another form of cancer that the pill is thought to combat? Endometrial cancer, which affects the uterine lining. Dr. Bradley Goldberg, a Georgia-based OB/GYN who wrote about benefits of the pill in the Los Angeles Times, cites the following research: Women who use the pill for at least two years cut risk of endometrial cancer by 40%.
Advertisement
Additionally, according to Dr. Susan Jick, epidemiology professor at the Boston University School of Public Health and an oral contraceptives researcher, the risk of benign ovarian cysts is also lower in women who use the pill. 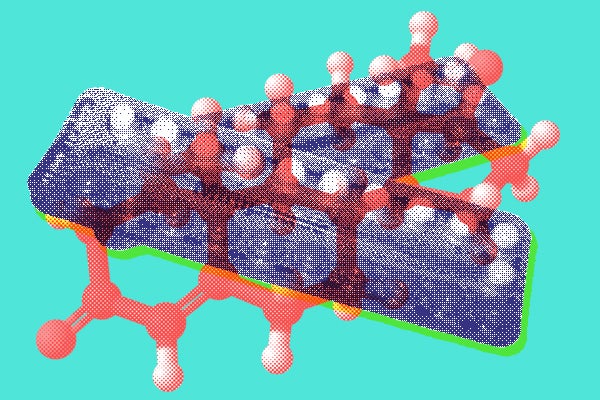 It Lowers Testosterone Levels.
This might sound desirable in an I-don’t-want-an-Adam’s-apple kind of way, but according to Dr. Sara Gottfried, a Berkeley-based M.D. and the author of The Hormone Cure, women need testosterone. When testosterone levels drop, some women on the pill (about 5%) feel pain when having sex and others (about 25%) experience vaginal dryness and decreased sex drive. “The travesty there is that when you’re 22 and you have vaginal dryness, it doesn’t make any sense,” Gottfried says. “They think, ‘I’m not menopausal. What’s going on?’ These women feel like they’re doing something wrong.”

But, even more alarming is the negative effects a decline in testosterone can have on many women's most treasured anatomical part: the clitoris. Gottfried says that a woman’s clit physically shrink by up to 20% with a testosterone drop, since testosterone is a major driver for the size of your clit. And, that may lead to less physical pleasure.
It Reduces Free Testosterone. “Any time you take oral estrogen, it raises your sex hormone binding globulins (SHBG), which is kind of like a sponge in your blood that soaks up free testosterone,” Gottfried explains. Since the pill increases the amount of SHBG, more free testosterone is absorbed and free testosterone levels — the amount of testosterone that your body can use — is lowered. That in itself can bring on low libido and fewer orgasms, according to Blakeway, as well as thinning hair, infertility, irregular periods, and blood sugar imbalances. But, the real kicker is that the levels aren’t automatically restored once a woman goes off the pill. “We don’t know how long that effect from the birth control pill stays with you. We know that a year later, it’s not as high as when a woman was on the pill,” Gottfried says.
Advertisement 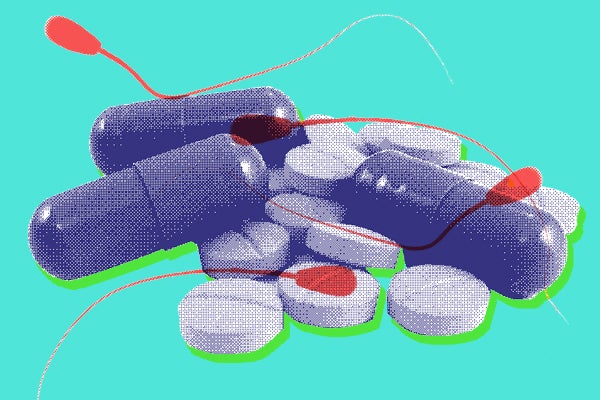 It Can Mask Reproductive Problems.
Blakeway says that many of the women she treats for infertility only discover reproductive issues, such as imbalanced hormone levels or irregular periods, after having gone off the pill. While the problem may not have been caused by the pill, it often remains an unknown for the years a woman is taking oral contraception. Blakeway also points to polycystic ovary syndrome (PCOS) as an increasingly common issue for women that is also masked while on the pill. “People often get put on the pill to regulate periods, but what they’re not doing is solving the underlying issues. The cycle the pill creates give women a false sense of security and stops them from getting help for issues such as PCOS,” she says.

The bottom line: Different bodies demand different types of birth control. It pays to spend extra time with your OB/GYN to get your hormone levels checked and to talk to your doctor about which options are best for you before deciding on a method. Once on birth control, pay attention to any changes that take place and be your own advocate for change, should you desire it. After all, these choices can affect the other side of the coin when it comes to sexual freedom — which mate you choose, how frisky you are, and how easily you can conceive once off the pill.
Want even more R29? Get the latest news, tips, and can't-resist stories delivered straight to your newsfeed, in real time. Like us on Facebook — we'll see you there!
Sex Toys
Let Your Partner Control Your Orgasms With These 17 Remote Contro...
by Erika W. Smith
Sex
Porn Is The New Sex Ed — Here’s Why That’s a Problem
I was terrified. I can’t pull off that position, I said to myself as I tilted my head to get a better angle. On my screen were two thin, white women,
by Melanie Whyte
Most Wanted
True Story: I’m 35 & Finally (Maybe) Trading Single-Use Pad...
It’s true: I’m a few weeks shy of my 35th birthday and still use single-use menstrual pads. I don’t know if it was the trauma of that fir
by Charlotte Lewis
Advertisement
Horoscope
Venus In Libra Is The Best Time For Love — What Does It Mean For ...
Although summer has ended and the fall equinox has come and gone, the heat has not — in our love lives, that is. Venus, the Planet of Love, is heading in
by Elizabeth Gulino
Horoscope
Your October Horoscope Is Here — Get Ready For Growth
by Lisa Stardust
Sex Toys
Found: 22 Sex Toys With The Hottest Reviews On The Internet
by Us
Horoscope
Your Horoscope This Week: September 25th to October 1st, 2022
by Refinery29 Contri...
Dedicated Feature
A 29-Day Challenge That’ll Inspire You To Run
by Sara Tan
Most Wanted
11 Suction Vibrators That Will Snatch Your Soul
by Karina Hoshikawa
Most Wanted
23 Graceful Gifts For Your Favorite Libra
by Karina Hoshikawa
Most Wanted
The Best Clitoral Vibrators, According To A Sex Therapist
by Karina Hoshikawa
Sex Toys
13 Oral Sex Toys That Reviewers Swear By
by Kasandra Brabaw
Advertisement
Advertisement
Discover
R29 Stories & News
Watch
R29 Original Series & Films
Shop
R29's Most Wanted