For any aspiring politician, getting Anna Wintour in your corner is quite the accomplishment — especially if you've previously snubbed the legendary Vogue editor. But that's what happened last night in Little Rock, during the unveiling of a temporary fashion exhibit honoring Oscar de la Renta. Wintour, who came in fourth among the Obama campaign's top fundraisers, praised the designer for his sartorial treatment of the country's first ladies during a speech, and championed Clinton's work as secretary of state. Oh, and she dropped a not-so-subtle hint about her hopes for the upcoming election: "It’s anyone’s guess what the next chapter will be for this extraordinary woman. I can only hope that all of you here in Little Rock will be celebrating her come November 2016.” While the endorsement makes perfect sense — powerful birds of a feather flock together, after all — it comes as a surprise to some, given Clinton's refusal to appear in the 2008 Vogue power issue. Looks like the Bobbed One can forgive and forget.
(Fashionista) 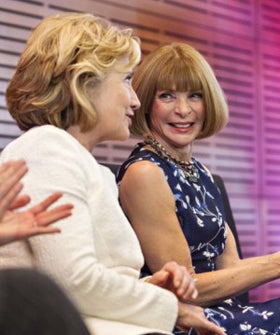